Hello my name is Bob Golding and I would like to share with you a new event that you may see in the system event log.  Event ID 153 is an error associated with the storage subsystem. This event was new in Windows 8 and Windows Server 2012 and was added to Windows 7 and Windows Server 2008 R2 starting with hot fix KB2819485.

Below is an example event 153: 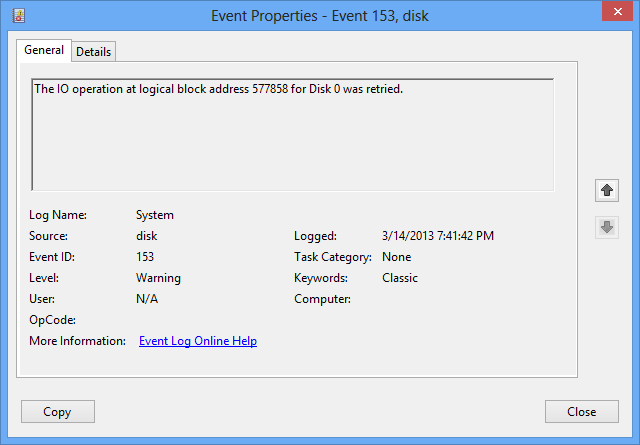 This error means that a request failed and was retried by the class driver.  In the past no message would be logged in this situation because storport did not timeout the request.  The lack of messages resulted in confusion when troubleshooting disk errors because timeouts would occur but there would be no evidence of the error.

The details section of the event the log record will present what error caused the retry and whether the request was a read or write. Below is the details output: 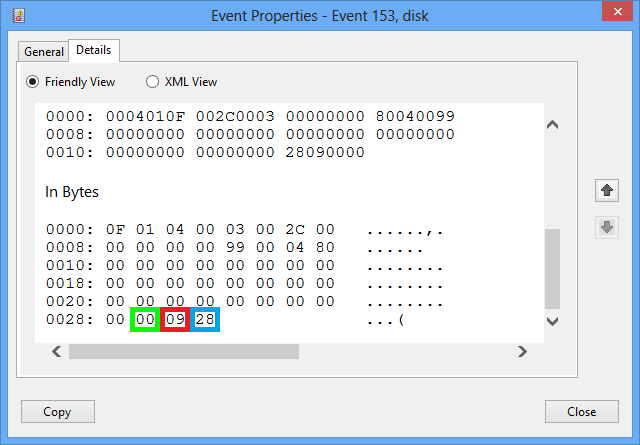 The most common SCSI commands are:

The most common SRB statuses are below:

The timeout errors (SRB_STATUS_TIMEOUT and SRB_STATUS_COMMAND_TIMEOUT) indicate a request timed out in the adapter. In other words a request was sent to the drive and there was no response within the timeout period.  The bus reset error (SRB_STATUS_BUS_RESET) indicates that the device was reset and that the request is being retried due to the reset since all outstanding requests are aborted when a drive receives a reset.

A system administrator who encounters event 153 errors should investigate the health of the computer’s disk subsystem.  Although an occasional timeout may be part of the normal operation of a system, the frequent need to retry requests indicates a performance issue with the storage that should be corrected.