My name is Marion Cole, and I am a Sr. Escalation Engineer in Microsoft Platforms Serviceability group.  This is Part 3 of my series of articles about ARM assembly.  In part 1 we talked about the processor that is supported.  In part 2 we talked about how Windows utilizes that ARM processor.  In this part we will cover Calling Conventions, Prolog/Epilog, and Rebuilding the stack.

In the first example the function Foo takes four integer values.  All of these are passed in the registers R0 - R3.  This one is pretty simple.

In the second example the function Foo takes an integer, a double, and another integer.  The first integer is put into R0.  However note that the double has to be in an even/odd pair and therefore R1 is unused, and the double gets put into R2/R3.  The last integer is pushed onto the stack.  This leaves R1 unused.  Programmers are suggested to not use this type.  Instead organize your variables to where they will fit like in the third example.  Also in this example the stack has to be word aligned, so there will be an additional unused word pushed and popped in order to keep the alignment.  Also note that on ARM that a Byte is 8 bits, a Halfword is 16 bits, and a Word is 32 bits.

In the third example the function Foo takes two integers and a double.  As you can see the first two variables are integers and they go in R0 and R1 respectively.  The last variable the double will then be aligned to go into R2/R3.

Return values are always in R0 unless they are 64 bits in size then a combination of R0 and R1 is used.

They will go into S0, D1, D2, S1 respectively.  These are aggressively back-filled.

Floating point return values are in S0/D0/Q0 as appropriate by size.

The Prolog on an ARM processor does the same thing as the x86 processor, it stores registers on the stack and adjusts the frame pointer.  Let`s look at a simple example from hal!KfLowerIrql.

As you can see the push instruction is different than x86.  On x86 we would have four push instructions to do the same thing that ARM is doing in one instruction.  This stores the registers in consecutive memory locations ending just below the address in SP, and updates SP to point to the start of the stored location.  The lowest numbered register is stored in the lowest memory address, through to the highest numbered register to the highest memory address.  We can see that here:

The addw instruction is setting up the new frame pointer.  This will add 8 to the value in sp, and store that in r11 which is the frame pointer.  Here is what that looks like in the debugger:

Now let`s look at the Epilog for hal!KfLowerIrql.  It is pretty simple as it is one command.

This is going to pop the first three registers from the stack back into their original registers.  However the last one is poping what was the link register (lr) into the program counter (pc).  This acts as a return, performing a similar function as what the RET instruction does on x86 but without using a unique instruction.  Program flow is controlled by manipulating the pc register.  Here is what this looks like in the debugger.

The registers before the pop instruction runs:

The registers after the pop instruction runs:

Now we are going to complicate this a bit by showing a function that has local variables, NtCreateFile.

Notice that this looks the same as the previous prolog, but one line is added.  The sub sp,sp,#0x30 is used to make stack space available for local variables.  This adds one instruction to the Epilog as well.

The add sp,sp,#0x30 is used to clean up the stack of the local variables.

One more prolog/epilog example.  This one is of IopCreateFile.  It saves the arguments that come in to the stack first.

As you can see this prolog is mostly the same, there is just one additional line for pushing the r0-r3 argument registers to the stack.

The epilog for this one is a little different.

Notice that the pop is not putting lr into pc for a return.  Instead the last statement is taking care of the pc register.  This instruction is calculating the pc address by adding 14 to the value in sp, and putting that into pc.  This cleans up the arguments and lr from the stack at the same time.  This ldr instruction is similar to the ret instruction on x86.

The last thing we are going to cover is called a "Leaf function".  A Leaf function executes in the context of the caller.  It does not have a prolog and does not use the stack.  It only uses volatile registers r0-r3, and r12.  It returns via the "bx lr" command.  Example of this is KeGetCurrentIrql.  Here is what it looks like in the debugger.

The stack must remain 4 byte aligned at all times, and must be 8 byte aligned in any function boundary.  This is due to the frequent use of interlocked operations on 64-bit stack variables.

Here we are going to discuss how to rebuild the stack from the frame pointer.

The frame pointer points to the top of the stack area for the current function, or it is zero if not being used.  By using the frame pointer and storing it at the same offset for every function call, it creates a singly linked list of activation records.

The frame pointer register points to the stack backtrace structure for the currently executing function.

The saved frame pointer value is (zero or) a pointer to the stack backtrace structure created by the function which called the current function. 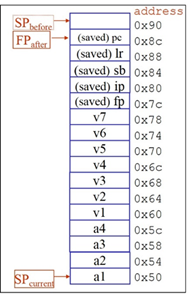 In the below diagram Main calls Foo which calls Bar 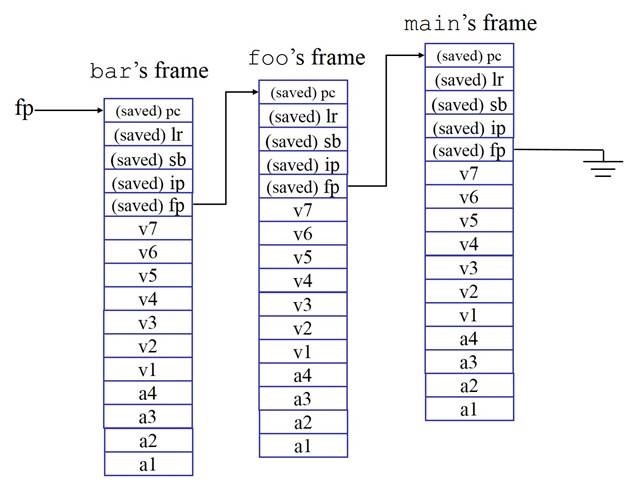 For more information about ARM Debugging check out this article from T.Roy at Code Machine: