This post is written by Nick Simons, a Senior Program Manager for Office Web Apps.

We wanted to simplify setup and capacity planning, and enable federation across multiple farms. We also wanted to accommodate requests for integration from new partners such as Lync. Finally, we heard from many customers, both on Office 365 and on-premises, that they wanted the same improvements that our SkyDrive users enjoyed on a regular basis.

To achieve these goals, we went back to the beginning and rethought how the Office Web Apps would integrate with other products now and in the future. We created a new model that separated Office Web Apps from any specific partner technology. Ultimately our model placed a relatively light coding burden on file hosts such as SharePoint while allowing us to run Office Web Apps on entirely separate servers.

We know, that at first, the idea of an additional type of server seems like it adds complexity and the burden on the administrator. But you'll see that by standing alone we get...

4.  Other products such as Exchange, Lync and third-parties integrating with Office Web Apps

5.  Delivery of new features and improvements to our web-based and on-premises customers at essentially the same time

With the previous version of Office, a typical Office Web Apps deployment looked something like this... 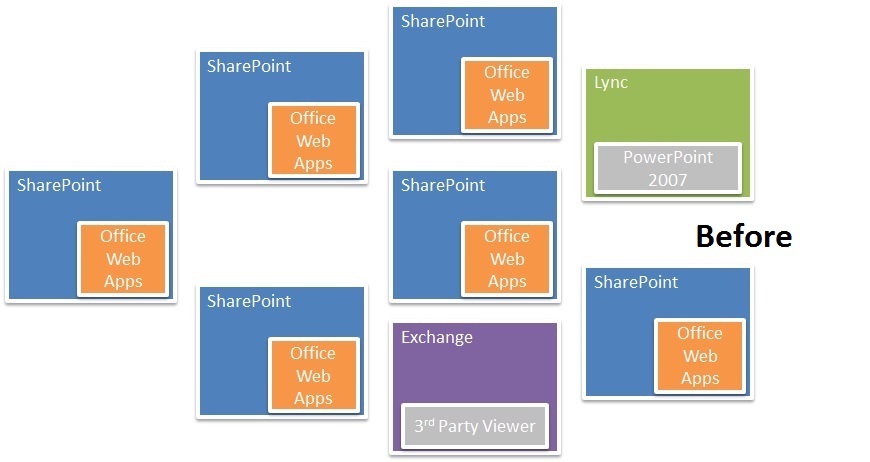 With Office Web Apps Server, we expect a deployment to look more like this... 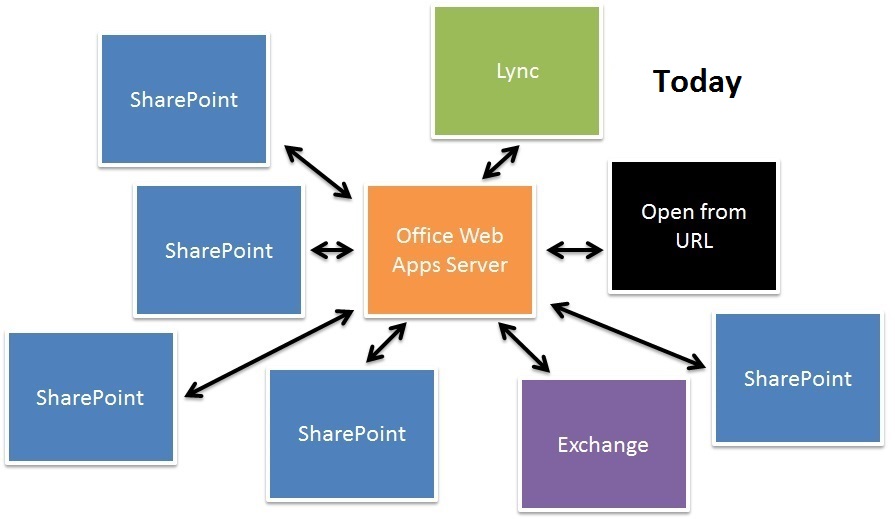 As you can see, a single Office Web Apps Server farm can serve multiple SharePoint 2013 farms plus Lync 2013 and Exchange 2013 (Outlook Web Access). Additionally, you can use your Office Web Apps farm to view any URL or UNC accessible Word, Excel, and PowerPoint file.

A Brief Overview of the New Integration Model

The following describes how Office Web Apps integrates with a file host like SharePoint at a high level. The information here will help you understand the network and security requirements described later.

WOPI is a RESTful API that uses HTTP/HTTPS. This means that, among other things, all traffic between Hosts and Office Web Apps Server travels through standard HTTP/HTTPS ports. It also means that, as much as possible, Office Web Apps Server is stateless. This makes it more resilient to an assortment of failures ranging from network outages to complete hardware failure.

To understand how WOPI works, let's walk through a simple scenario where a user, Sally, views a file called test.docx hosted on SharePoint. Here’s how that works...

1.  Sally navigates to a document library where test.docx is stored.

2.  Sally clicks the file name in the document library.

4.  WOPIFrame.aspx contains an iframe (https://dev.w3.org/html5/spec/the-iframe-element.html) which it navigates to a page on the Office Web Apps Server. We'll call that page WordViewer.aspx. The HTTP request to WordViewer.aspx includes some important information:

5.  Office Web Apps Server uses the WOPI Source and the Access Token to get test.docx from SharePoint.

Here is a picture that shows the data flow between the browser, SharePoint, and Office Web Apps Server...

A server farm in this case can be anything from one virtual machine running on a shared server to a farm of dozens of datacenter-class servers. The basic setup and maintenance is the same in all cases. The precise prerequisites and steps for creating a farm are, of course, included with the product. I won't reproduce that documentation here. What I will do is describe what's involved at a reasonable level of detail.

First, you'll need some machines. Let’s assume you’re setting up a farm to serve the needs of 80,000 users of multiple SharePoint farms. We think you'll probably need 4 servers with...

You'll also need a load balancer. We have a 10 machine farm set up at Microsoft that shares an F5 BIG-IP hardware load balancer with a number of other server products. That arrangement works extremely well but any decent load balancing solution will do the trick. The only strong recommendation we make is that your load balancing solution support affinity. For performance, it is very valuable if the same server handles all requests for a specific session.

I'm going to assume that you'll want users to have access to Office Web Apps from both your internal network and the internet. If so, you'll need to set up both internal and external DNS for your farm. Or, you could opt to just setup external DNS and use internal DNS rules to keep internal requests on your private network. That's what I would do.
It’s your network so set it up how you see fit. All we require is...

Making sure these network routes are set up correctly is critical. The Office Web Apps are relatively simple but they only work when the channels of communication are open.

As I noted in the previous section, the initial request to render or edit a file includes user credentials in the form of an Access Token. In turn, this Access Token is included in all requests from Office Web Apps to Hosts. All this traffic must be protected with SSL unless you are on a private network and you trust everyone who has access to that network. And then you should still use SSL. Really.
Setting up SSL requires creating certificates and putting them on each Office Web Apps Server machine or on the load balancer. If you choose to terminate SSL at the load balancer, there are specific settings in Office Web Apps Server you can use. I'll cover that in a moment.

You now have a single-machine Office Web Apps Server farm.

With that done, move on to Server2. On that server run the following...

Now you have a two-machine farm. Repeat the previous step on Server3 and Server4.

You will also need to run the following command to tell the SharePoint farm that you want to use the Office Web Apps Server farm's external URL and that it uses HTTPS.

Now you really are done. Navigate to a document library in the SharePoint farm and create, view, and edit Office files to your heart's content. No further configuration is required.

Finally, if you want to disconnect the Office Web Apps Server Farm from SharePoint, run the following...

If you go to a document library in the SharePoint farm now, there will be no trace of the Office Web Apps.

When machines are taken out of the farm some users may encounter hiccups but the Office Web Apps will recover. This works for all cases except the single machine case (for obvious reasons).