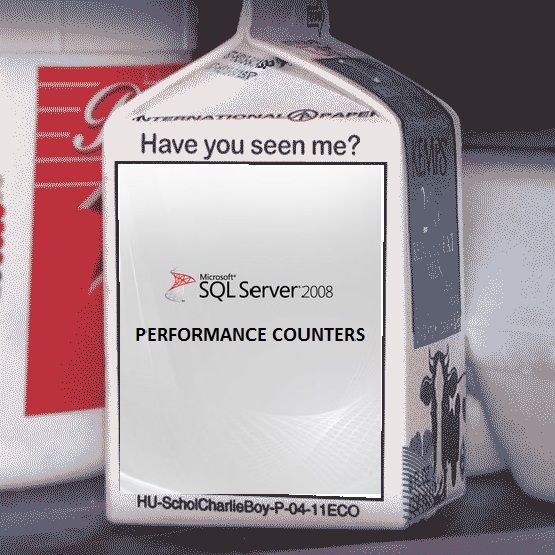 The right and easiest way to recover the SQL counters is to repair the SQL Server binaries, trough add/remove programs. However this will require downtime on the SQL instance (If you’re using a cluster you could do a switch-over to another node)

Therefore there’s another option, you could recover this counter executing the following steps:

First you need to open a command prompt console with administrative rights.

Go to the directory BINN on the SQL Instance you want to fix (Ex: C:\Program Files\Microsoft SQL Server\MSSQL10_50.MSSQLSERVER\MSSQL\Binn)

Now to avoid any inconsistency eliminate any leftovers of the SQL Counters using unlodctr MSSQLSERVER, for named instances use the format MSSQL$InstanceName

Now you should restart the services Remote Registry and Performance Logs & Alerts, using the followings commands:

If you are using the previous procedure to recover the SQL counters on a SQL Server Cluster, you should rebuild the counters on both nodes, when you are rebuilding the counters the SQL Instance must be active on the node.

If after you have executed the above steps the SQL Counters have not appear, you will need to review the registry hives and keys (it’s not recommended to do any changes at the registry level, doing so could lead to instability on the operating system. If you chose to do these changes you should have a backup of the Operating System and Registry, to recover it if necessary), the following registry keys should exist and have a valid configuration.

You should also check if there’s a key named Disable Performance Counters inside HKEY_LOCAL_MACHINE\SOFTWARE\Microsoft\Windows NT\CurrentVersion\Perflib, if it is configure with the value 1, it should be configure with 0. This should allow you to rebuild the registry counters and help files.

Now it may or not be necessary to rebuild the SQL and/or Operating System counters, look for the SQL Counters on perfmon, if they aren’t there use the previous steps to rebuild then, with the following command you can rebuild all the operating system counters.

I hope this post is helpful, remember there’s a ton of good post on our blog that can help you on many SQL Server topics and how to Troubleshoot some problems. See you on the next post!