[Update 8/2017: With Cloudera Director support on Azure, you can now automate this whole process of enabling Kerberos on a Cloudera cluster.  See this Github repo for instructions and scripts.]

In this blog post, we will show you step by step how to secure a Cloudera cluster by enabling DNS, Single-Sign-On (SSO) and Kerberos with Active Directory.  While we will deploy Active Directory and Cloudera VMs in Azure, because Azure makes deployment much easier, it doesn't have to be Azure to integrate AD with Cloudera.  Many of the steps should apply to AD and Cloudera in general.  Here's what this system topology looks like. 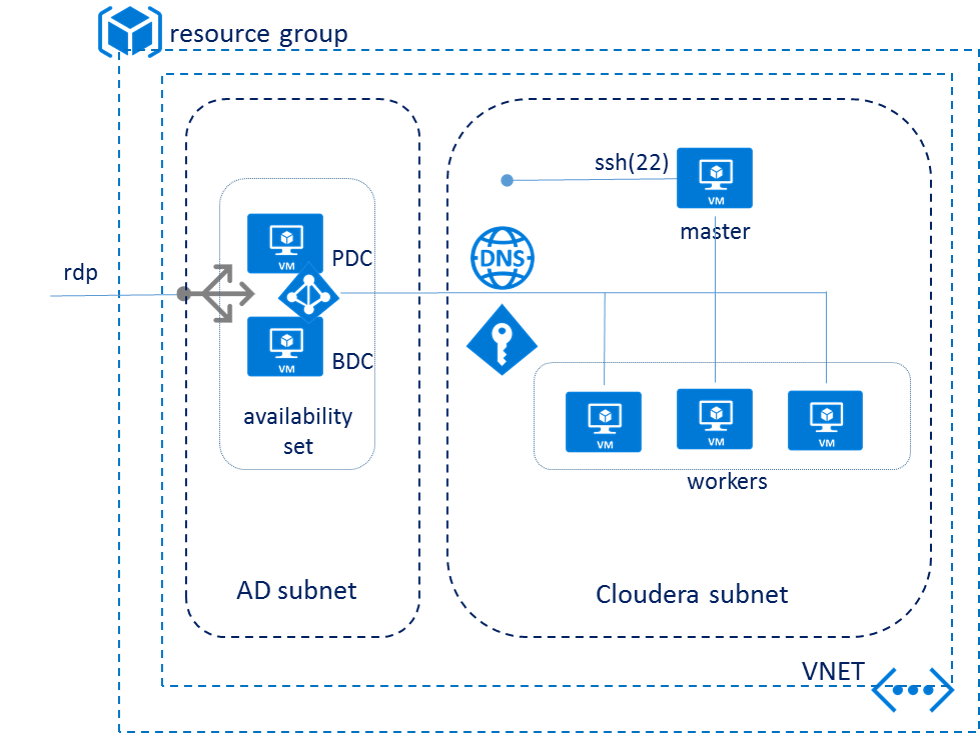 The following steps are described in details.

Part 1 of this blog will cover the first 4 steps, Part 2 will explain how to join Linux VMs to AD and enable Single-Sign-On, and Part 3 will cover the remaining Cloudera specific steps.

By the end of this step, we will have an AD forest with a primary domain controller (PDC) and a backup domain controller (BDC).  We can create this AD forest by simply deploying this template on Azure Quick Start Templates repo on GitHub.  Among the parameters to the template, the following two impact the rest of the components in this system:

By the end of this step, we will have 4 identical Cent OS VMs in Azure, with necessary SSO and Kerberos packages installed and /etc/krb5.conf, /etc/samba/smb.conf, /etc/sssd/sssd.conf, and /etc/ntp.conf configured.

We can deploy either a production or an evaluation type of cluster with any number of data nodes, for simplicity, here we will deploy an evaluation cluster with 1 master node and 3 data nodes.  If we specify cloudera in the dnsNamePrefix, and bigdata.com in adDomainName, the 4 VMs will have these FQDNs:

However, the VMs are not addressable with these domain names until we integrate the VMs with Active Directory DNS.  All the VMs have static IP addresses within the VNet.  The deployment also populates the following files in each VM with the specified AD info:

By the end of this step, we should be able to ping the Linux VMs with their FQDN from within the VNet.  Note that registering a domain name on the Internet is out of the scope of this blog, so here we will use the AD domain, for example, bigdata.com within the VNet.

1.  RDP into the PDC, and open the DNS Manager.  Note that if DNS Manager is not installed, install it by "Add Roles and Features" -> Features -> Role Administration Tools -> DNS Server Tools
2.  Add a new reverse lookup zone if there's none that corresponds to the subnet address range where the Linux VMs are located 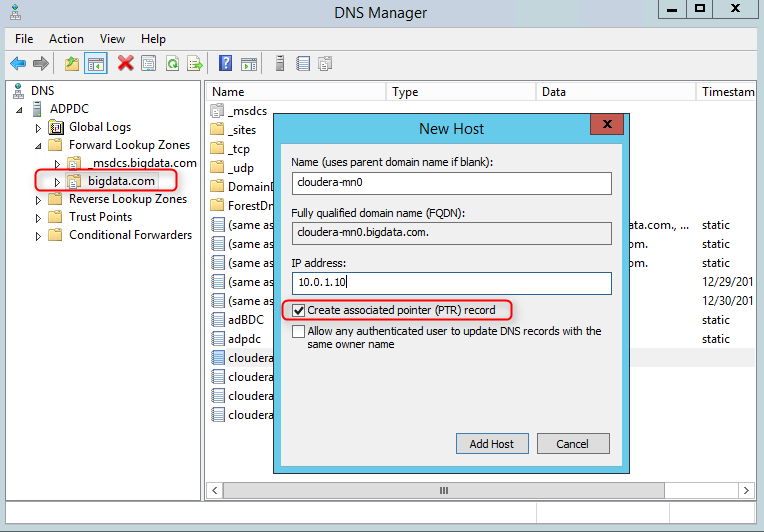 4.  On the Linux VMs, verify VMs are reachable by their DNS names:

By default, the AD domain controllers deployed in this example are already running time service for its clients to sync.  The Linux VMs also have their /etc/ntp.conf configured to sync with AD.  If your AD doesn't have time service running, you can use the steps below to configure it.

1.  On the PDC, configure the Windows Time service by running this command, time.windows.com is a valid time server, or you can use another time server of your choice, restart the time service

2.  On the BDC, restart the time service by running the following command:

3.  On the Linux VMs, verify time syncing with the following command, the "system peer" in the output should point to the PDC:

Now we have an AD forest with a PDC and a BDC.  We have Linux VMs addressable by AD DNS and syncing to the AD time service.  In Part 2 of this blog, we will join the Linux VMs to AD and enable ssh with AD users.