I felt that it is time to give VBA some love. I was surfing Web and came across this post on Changing the Cell Background Color which gave me an idea for a blog post. This post is a simple example of how to write an event handler that checks if a name of a task has a prefix of “XYZ_”. If it does, it changes the background color of the Task Name cell to yellow.

This could be useful in scenarios where there is validation when saving to the server and you want to warn the user before the save. For example, say there is a third party application that inserts tasks into project plans automatically. When tasks are inserted by this application, it is prefixed with a code, “XYZ_”. This allows project managers to quickly identify tasks that have been inserted by the third party app. To prevent project managers from inserting the task with the same prefix, a Project Server event handler has been written to prevent tasks with the prefix from any user, except for the user context used by the third party app. This event is only fired during a save to Project Server. To give an early warning to the project manager that the project will fail on saving to the server, we can do following:

At this point we have the event handler hooked up and every time the user changes a task, they will get an annoying test message box. To test it, run: ThisProject.Initialize_App.

Here is what you should get when you change a task: 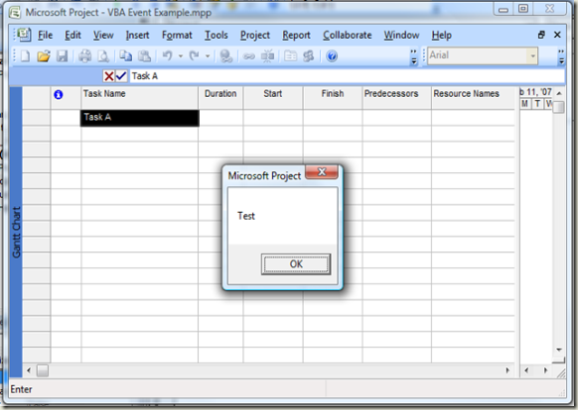 Now every time a user changes a task name to begin with "XYZ_" they will see the background color of the cell change to yellow:

My scenario may be a bit of overkill, but hopefully it illustrates how to use the Before Task Change event and how to change the background color of a cell. Maybe in a future post, I will implement the server event that checks the names of the tasks.