A whitepaper planned by the SQL Server product team will document specific scenarios where new and old cardinality estimators differ. We will follow up with a later blog post when that paper is released. Additionally, Juergen Thomas has posted an overview of the feature on "Running SAP on SQL Server blog".

In this blog, we will provide a quick overview about controlling the SQL Server 2014 feature, guidelines on troubleshooting issues. We have plans to release more blog posts related to SQL Server 2014 new cardinality estimator in the future.

One of the goals for this blog post is to help make customers aware of this feature for upgrades and new deployments as query plans may change. We encourage users test sufficiently prior to upgrading to avoid performance surprises.

How to tell if you are using new cardinality estimator

There are two ways you can tell if new cardinality estimator is used.

You can enable these trace flags at server, session or query level. To enable the trace flag at query level, you use QUERYTRACEON hint documented in 2801413. Below is an example query

Since we have multiple ways to control the behavior, let's talk about order of precedence. If the query has QUERYTRACEON hint to disable or enable the new cardinality estimate, it will be respected regardless of server/session or database level settings. If you have a trace flag enabled at server or session level, it will be used regardless the database compatibility level setting. See the diagram below. 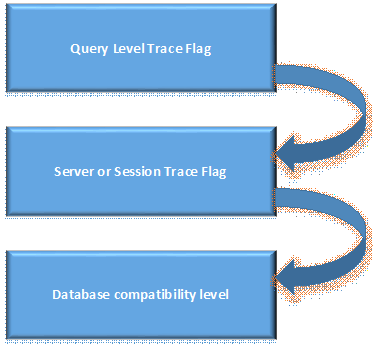 You may not have sufficient indexes on tables involved for the slow query. Here are a few ways you can help tune your indexes.

Constructs not significantly addressed by the new cardinality estimator.

In the future blogs, we will document more on how to use new XEvent query_optimizer_estimate_cardinality to troubleshoot query plan issues and how plan guide may be used to control the new cardinality estimator behavior.

Many thanks to Yi Fang, a Senior Software Design Engineer from SQL Server Query Processor team at Microsoft, for reviewing and providing technical details on this blog.