I wanted to pause for a brief second to remember the 53 people in my hometown who lost their lives 5 years ago yesterday, when Hurricane Katrina took my hometown off the map.

If a town doesn’t have any buildings, is it still a town? Waveland answered that question by surviving.

My Parents on NBC Nightly News

And once again, my parents were featured on NBC Nightly news for the 5 year anniversary.

“Living through hell prepares you for anything life throws at you.”

Quote taken from a friend’s blog post regarding an outsider’s perspective on the storm. Amen.

Just wanted to remind folks that they can still donate directly to the scholarship fund I created from my Visual Studio Tips book royalties. https://www.mgccc.edu/creditcard.htm 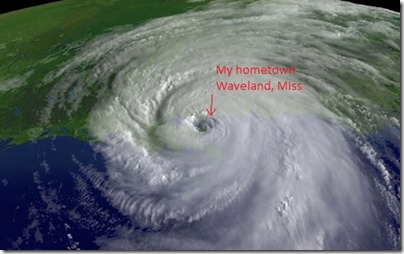 Photo found here. Annotations are mine.

I guess it depends on what you mean by “rebuilt?” If rebuilt means “back the way it was” then the answer is a definitive no. In many places it has rebuilt, but it many, many different ways. And in many places it still 5 years later looks like Katrina just happened.

But every time I go home, things are looking better and better.