Standoff between me, my bike, and wildlife creature captured on my Windows Phone

Seems that whenever I bring my Windows Phone with me on a bike ride, something unusual happens.

I’m doing a well-known bike loop in the area, when I realize I’ve made a wrong turn. I stop and check where I am on the “Maps” app. Sure enough, I’m at the exact center of the loop. Not half way around the loop, but directly bullseye. Only me.

I use this time to refuel (Gu gel, Heed sports drink) when I hear a very disturbing noise from the woods across the street. I’m in a rural area with very few cars and houses, so it’s not surprising there’s wildlife so close to roads. But whatever this thing is, it’s big and moving closer to the road .

Having lived in Seattle for a while, I worry it’s a cougar, a small mountain lion that attacks people if they feel threatened. You’ll hear stories on the local Seattle news of hikers or runners who have disappeared on trails, and a lot of the time the authorities suspect a mountain lion or some other wildlife.

I immediately consider running for it, since I have my bike. But, I’m surrounded by small hills, so I quickly abandoned the idea of a quick getaway.

The noise is very loud, moving very fast, and is headed straight for me.

Seattle hiker advisories say “If a mountain lion attacks, fight back aggressively.” I pick up my road bike. I’m betting the bike is going to be lightweight enough to use as a weapon. It’s not like I have anything else to bet on. Whatever this creature, mountain lion, ManBearPig is, it might get me at the end, but I’ll make sure it limps away very injured.

The noise explodes. The creature emerges. It looks me directly in the eyes.

I drop my bicycle in relief. It’s just a deer.

Trying not to shake too badly from the adrenaline rush, and not to mention the Gu gel w/ caffeine, I grab my Windows Phone and start taking photos. I unlock the phone and press the “Camera” button on the side to load the camera. Then I press the Camera button a few more times to grab some photos. This is my first time taking pictures with the Windows Phone at the drop of a dime. I have to say compared to my previous BlackJack, I was happily surprised I was able to capture this vicious creature and it’s squadron. 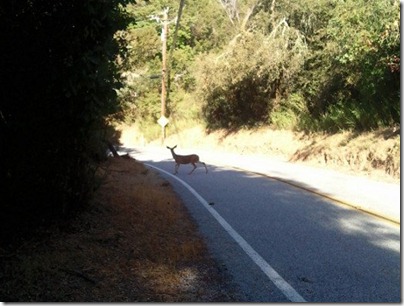 There were 4 deers total, hence why the creature sounded huge and ferocious in the woods. 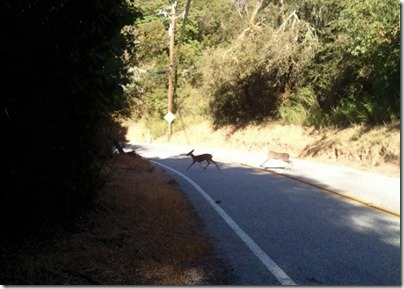 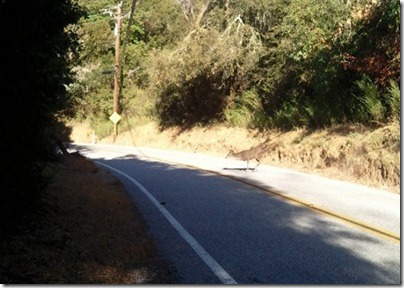 Can’t wait to see what adventure my Windows Phone brings me next time!