SharePoint with Large lists is common scenario in any Sharepoint deployment. While there are Several blogs / Guidance TechNet articles which exist working /Managing Large lists, My blog is particularly about the "List view lookup Threshold"

This feature limits the number of joins that a query can perform. Each lookup column in a list view causes a join with another table. Each additional lookup column in a view increases the complexity of metadata navigation and list view queries. By number of joins, I mean the number of Lookup, Person/Group, or Workflow Status fields that are included in the query. So for example, if you have a view that displays 6 lookup columns, and filters on another 3 distinct lookup columns then by default that view won't work, since the List View Lookup Threshold is 8, and the view is attempting to use 9 lookups. 3. We allow overriding the query throttling in following circumstances

a. User is browsing when the system is in an Unthrottled Time window ( Web application throttling settings) 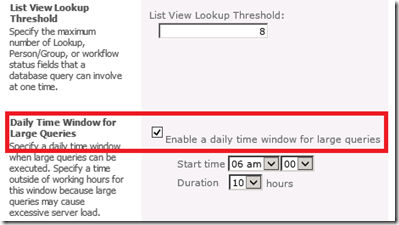 b. The current user is a box administrator (part of local admin group on the machine where the request is served from) . Local admin privileges can also be obtained by being part of an AD group which in turn is a part of local or Domain Admins groups . you can use the following command prompt to dump the group membership of a logged on user on a particular Machine /workstation .

c. The user is browsing using farm admin/Application Pool account   for the Web-application .

We highly recommend that you do not increase this number beyond the Default Threshold Limit , because through thorough testing we've observed that there's a serious non-gradual performance degradation that shows up above 8/12  joins. Not only does the throughput that the server can handle drop significantly at that point, but the query ends up using a disproportionately large amount of the SQL Server's resources, which negatively affects everybody else using that same database. Here is an article which talks about more on the Performance impact https://technet.microsoft.com/en-us/library/ff608068(office.14).aspx

SharePoint 2010: How to Change the List View Threshold and Other Resource Throttling Settings

Manage lists and libraries with many items

Any new Web-Application created will have List View Lookup Threshold set to  Default =12 , While the values on Existing Web-apps needs to be modified Manually .