Extended events is a powerful feature that allows us to troubleshoot performance issues within SQL Server. One of the ways you can utilize extended events to aggregate statements is described in a blog post below by Bob Dorr SQL Server 2012: RML, XEvent Viewer and Distributed Replay

Let’s apply that methodology to a contrived scenario, and my top statement in this case is a statement that consumes a bunch of CPU and I need to tune it.  Note that the aggregation is done on query_hash. Bart has an excellent post on Query Fingerprints and Plan Fingerprints ( query_hash and query_plan_hash) and would recommend going through that post if you aren’t already familiar with the concepts as that is key to understanding the remainder of this post.

As we can see from the below aggregation, this statement is executed 107 times, but if I look at individual executions (note the highlighted ones), some executions take a “small” number of reads and negligible CPU. Some others take significantly more CPU and number of reads. 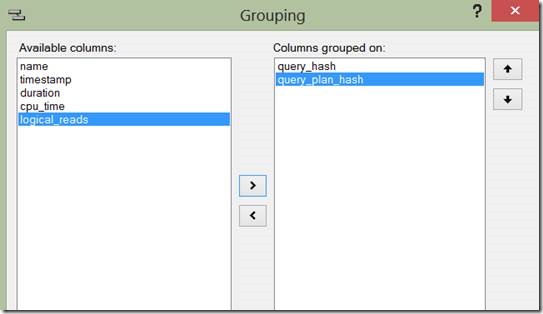 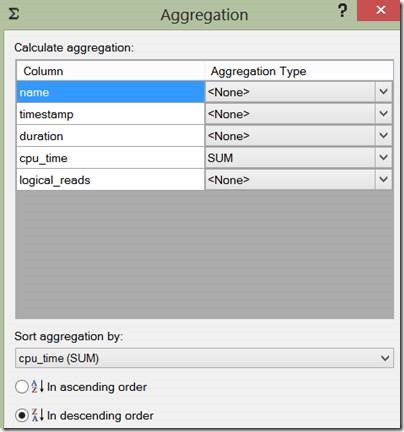 Once I did that and aggregate by CPU descending, I noticed that the same query_hash  had 2 different query_plan_hash values indicating this statement had 2 different plans at different times

Given this data, you can reason that when a particular plan is chosen, resource consumption is more than when the alternative is chosen. So we in a way have a “good plan” and “bad Plan” type of situation that could be due to parameter sniffing or a number of other reasons. Once again a good read is Query Fingerprints and Plan Fingerprints ( query_hash and query_plan_hash)

· What was the difference between the 2 plans?

· Do I have to collect another set of data with plans in order to get that information?

Note that when collecting Extended Events, there are events such as Query Plans that are expensive to collect. Normally, in the lifecycle of an Extended Event, if an event is enabled, we collect the Columns (attributes) that are a part of the Extended Event itself, then apply any filters, and then execute any Actions. In the case of query plans, there are some performance implications of collecting them in a production environment.

Given that information, my thought was to extract the estimated plans from  dm_exec_query_stats DMV. If your XE File has the sql_handle or the plan_handle captured for the statement level events, then it is pretty straightforward if you get the plan_handle from the Extended Event.

select c.query_plan,b.text,a.* from sys.dm_exec_query_stats a

However the question is how do we know if this was the “good” or the “bad” plan given there are 2 plans?  The plan_handle won’t distinguish which of the 2 alternatives this was.  The key lies in the query_plan_hash. If you look at the Properties of the plan, you will see the QueryHash and the QueryPlanHash as below.

Looking at the query_plan_hash from the Extended Event session you can decipher which is the more expensive plan in general.

Unfortunately “currently” you cannot always directly correlate to the XEvent query_plan_hash  to the Execution Plan or sys.dm_exec_query_stats query_plan_hash given the data types are different. The query_hash and query_plan_hash in XEvent is a UINT64, and it is binary in sys.dm_exec_query_stats. Given that, you have to do some bit manipulation to turn off the most significant bit in order to compare the 2 since there isn’t a UINT64 data type in SQL Server. If the MSB (most significant bit) is not set, then you can convert easily. If it is set, though, you have to do bit manipulation to turn it off. Internally I have filed a bug filed on the same to ensure the data types match so as to not have to use the workaround below but if this a must have please file a connect item.

Before we dive into the TSQL script, I will try to spend a couple lines to explain that to folks who haven’t worked a lot with binary. For this example let us consider a Smallint data type in SQL Server. The possible range of values for smallint (2 bytes) is -32,768 to 32,767

Converting 2 bytes below to Binary, you notice in the second row, if the same 2 bytes are signed, the most significant bit (highlighted) is used to indicate if it is a positive or negative number. If it is set, it is negative, if not, it is positive.

Given this table, you can see that to compare an unsigned to a signed value, we have to manipulate and turn off that most significant bit so that the values can be compared.

Now looking back at our XE values, the problem here is that XE query_hash is an unsigned INT 64 but we do not have a matching data type in SQL Server to convert the DMV query_hash into and hence the script below.

--- For a single Query_hash comparison

-- Turn off most significant bit from sys.dm_exec_query_stats

-- This is the XE hash with no MSB set

-- This is the DMV or Query Plan query_hash with no MSB set.

select 'Hash is not equal'

We can modify this to directly query query sys.dm_exec_query_stats and see if this particular query_hash and /or query_plan_hash is currently in cache.

-- Compare hash after turning off MSB on both places

select b.text,c.query_plan,a.* from sys.dm_exec_query_stats a

Note that while we are attempting to pull the “good” or “bad” plan from the cache, keep in mind that it won’t always be in cache. We can use ways to poll for its existence and dump it out if necessary, though as the hash is the signature and won’t change. We have already seen the “good” plan which was a SCAN, now we need to attempt to retrieve the “bad plan” when it comes into cache, but we are definitely aided by the fact that we know the query_hash and the query_plan_hash.

Pulling the Bad plan for the same query using the bad query Hash (when it exists in cache). You can further tweak this to poll and see whenever that query_hash has a query_plan_hash that is different than the known “good” query_plan_hash.

-- Compare hash after turning off MSB on both places

select b.text,c.query_plan,a.* from sys.dm_exec_query_stats a

As you can see below, there is an estimation problem, estimated 56 rows but returned 49,000 resulting in a potentially suboptimal plan being chosen. The reason that was the case is a data skew in the base table. If you look at the “Compile” parameter in this case, the @country was compiled with the parameter ‘AU’ . In the prior snapshot of the plan earlier in the article which had the SCAN, the compile parameter was ‘US’

The intent of this post is NOT to go through explaining parameter sniffing as a whole, the focus in this post was helping to use Extended Events effectively and to be able to retrieve plans from the cache correlating the XE data so as to avoid the overhead of having to collect the Plan related extended events.