Following graph shows the comparison of data migration throughput and elapsed time improvement with TF 715 in SQL Server 2014 SP1 CU8 for the same amount of data loaded by R3Load process. 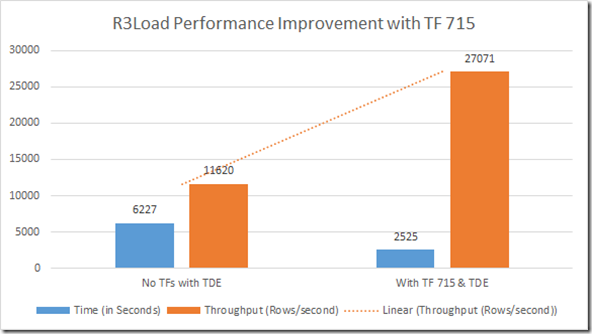 TF 715 can be set at the instance-level (global) or session level which enables TABLOCK for bulk load operations into heap with no non-clustered indexes. When this trace flag is enabled, bulk load operations acquires bulk update (BU) locks by default when bulk copying data into a heap with no non-clustered index. Bulk update (BU) locks allow multiple threads to bulk load data concurrently into the same table while preventing other processes that are not bulk loading data from accessing the table. The behavior is similar to when the user explicitly specifies TABLOCK hint while performing bulk load or when the sp_tableoption ‘table lock on bulk load’ is on for a given table however enabling this TF makes this behavior default without making any query changes or database changes.

TF 715 significantly enhances the performance of parallel bulk load operation on a heap with no non-clustered index. The following chart compares the data load performance improvement of 4 parallel bulk load session inserting 10 millions records each on a sample heap table with no indexes. The total elapsed time with TF 715 is around 1/10 the time taken by bulk insert without TABLOCK. 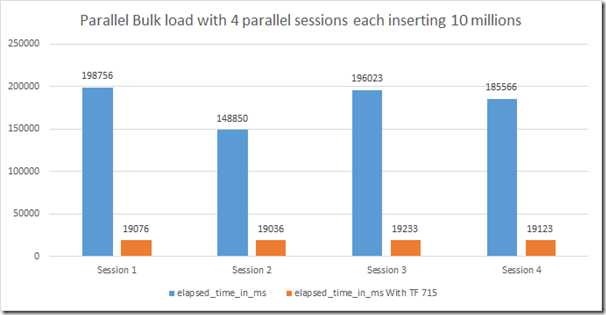 The performance gain with TF 715 is achieved due to following

Minimally Logging – if the database is in Simple or Bulk logged recovery mode, bulk load with TABLOCK into heap results into minimally logged operation which significantly reduces the logging overhead and I/O involved which further enhances the data load performance.

TF 715 is documented trace flag and will be supported by Microsoft. Overall turning on Trace flag 715 will be beneficial to improve the data load performance while loading the data in a heap with no index. The benefits are similar to adding a TABLOCK hint while performing bulk insert operation but in scenarios where some of the third party tools doesn’t allow customization to add the TABLOCK hint, trace flag 715 can be useful as it turns on the behavior out of the box without any application changes.

When NOT to enable trace flag 715?

If you have scenario where a DML or Select query is executed on heap table concurrently with bulk load operation, TF 715 can block sessions performing DML or select query on the table due to the table level lock. This is the scenario where Trace flag 715 can limit the overall concurrency of the table and should NOT be turned ON. Hence it is recommended to use this trace flag to optimize data load scenarios and should be turned off otherwise.