With SQL Server 2012 we introduced Always On Availability Groups, and the Always On Availability Group Dashboard in SQL Server Management Studio (SSMS). This dashboard can be utilized by database administrators to view the current health of an Availability Group and its availability replicas and databases. While the dashboard can be configured to provide information regarding the latency between Primary and Secondary Replicas (can be calculated using the Commit LSN, Sent LSN and harden LSN values), it does not provide insights into the reason for the latency. To understand the reason for latency, requires capture and analysis of Extended Events and Performance Monitor counters. This activity can be time consuming and requires extensive knowledge of the Extended Events associated with Always On.

With the new SSMS 17.4 release, we are introducing the Availability Group Latency data collection and reporting built into the Availability Group dashboard. This feature masks the capture and analysis of the Extended Events from the end user and provides an easy to understand report detailing the time spent during the various phases of the Log Transport process.

What to use it for?

How does it Work? 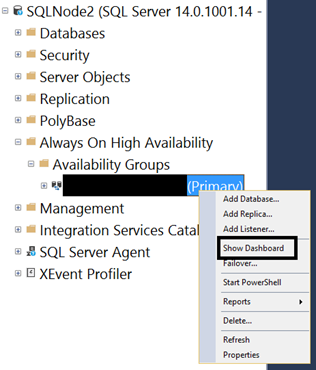 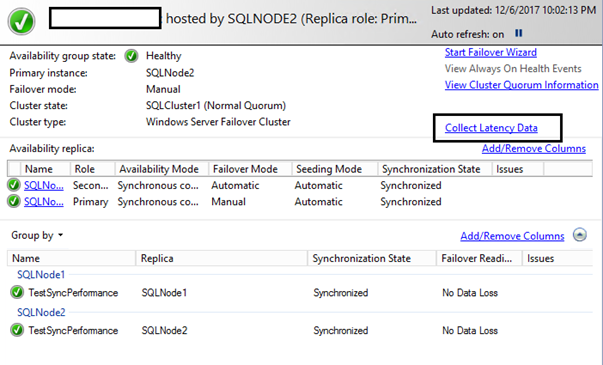 When an admin clicks on the "Collect Latency Data" link, SSMS behind the scenes connects to all the Replicas in the Availability and performs the following tasks.

The primary replica latency report has 3 sections. The first section provides Replica information for the AG.

The Second section provides a graphical view of the avg. Commit time on the Primary Replica and the avg. remote Hardening time for all the secondary replicas. This information is based on the values retuned by the hadr_db_commit_mgr_harden and the hadr_receive_harden_lsn_message. For more information on these extended events refer here.

The third and final section of the report provides numerical values for commit duration, remote hardening duration, time spent in compression and send duration for the log block.

The following values are reported by the Primary Replica Latency Report

The Secondary Replica Latency information provides a breakdown of the time spent on the secondary replica during the log block transport. This report also has 3 sections as shown below.

The following values are reported by the secondary replica latency report

Note - In the sample report images above the latency is being caused by the high network roundtrip latency between the primary and the secondary replicas. This demo setup included servers in different geographies (US West and US East), with an average roundtrip latency of 25 millisecond between the two servers.

The Availability Group Latency data collection feature is only enabled for sysadmin (only Windows Authenticated) accounts and requires that the current user account be an admin on all the replica instances.