While SQL Server 2016 runs faster, SQL Server 2017 promises to run even faster and empower customers to run smarter with intelligent database features like the ability to run advanced analytics using Python in a parallelized and highly scalable way, the ability to store and analyze graph data, adaptive query processing and resumable online indexing allowing customers to deploy it on platform of their choice (Windows or Linux). SQL Server is one of the most popular DBMS in SQL Community and is a preferred choice of RDBMS among customers and ISVs owing to its strong community support. In SQL Server 2017 CTP 2.0, we have released several customer delighters and community driven enhancements based on the learnings and feedback from customers and community from in-market releases of SQL Server.

SELECT INTO … ON FileGroup - One of the highly voted connect items and highly requested feature ask from SQL community to support loading tables into specified filegroups while using SELECT INTO is now made available in SQL Server 2017 CTP 2.0. SELECT INTO is commonly used in DW scenario for creating intermediate staging tables and inability to specify filegroup was one of the major pain points to create and load tables in filegroups different from the default filegroup of the user loading the table. Starting SQL Server 2017 CTP 2.0, SELECT INTO T-SQL syntax supports loading a table into a filegroup other than a default filegroup of the user using the ON <Filegroup name> keyword in TSQL syntax shown below

Tempdb Setup improvements – One of the constant feedback from customers, SQL community and field after doing the SQL Server 2016 setup improvements is to uplift the maximum initial file size restriction of 1GB for tempdb in setup. For SQL Server 2017, the setup will allow initial tempdb file size up to 256 GB (262,144 MB) per file with a warning to customers if the file size is set to value greater than 1GB and if IFI is not enabled. It is important to understand the implication of not enabling instant file initialization (IFI) where setup time can increase exponentially depending on the initial size of tempdb data file specified. IFI is not applicable to transaction log size so specifying larger value of transaction log can invariably increase the setup time while starting up tempdb during setup irrespective of the IFI setting for SQL Server service account. 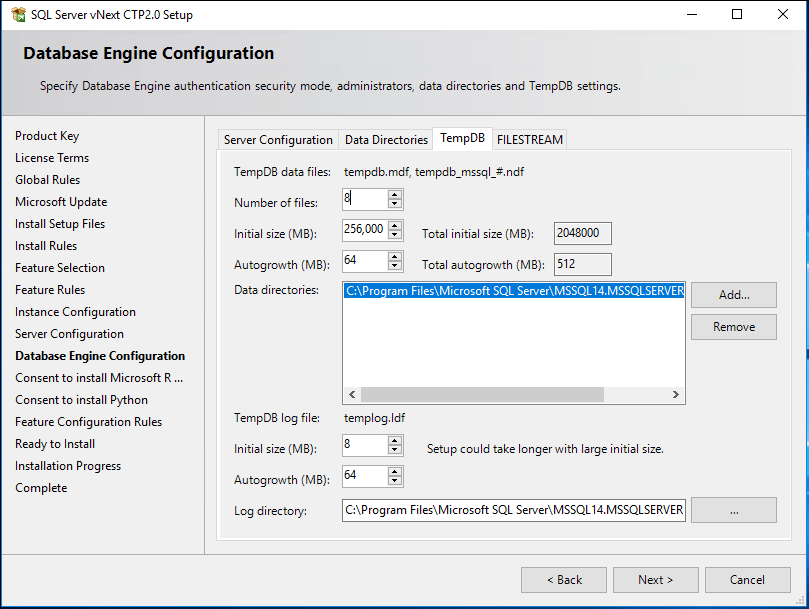 Tempdb Monitoring and Planning – Few months back, SQL Server Tiger team surveyed SQL Community to identify common challenges experienced by customer with tempdb. Tempdb space planning and monitoring were found to be top challenges experienced by customers with tempdb. As a first step to facilitate tempdb space planning and monitoring, a new performant DMV sys.dm_tran_version_store_space_usage is introduced in SQL Server 2017 to track version store usage per database. This new DMV will be useful in monitoring tempdb for version store usage for dbas who can proactively plan tempdb sizing based on the version store usage requirement per database without any performance toll or overheads of running it on production servers.

Transaction Log Monitoring and diagnostics – One of highly voted connect items and highly requested ask in the community is to expose transaction log VLF information in DMV. T-log space issues, high VLFs and log shrink issues are some of the common challenges experienced by DBAs. Some of our monitoring ISVs have asked for DMVs to expose VLF information and t-log space usage for monitoring and alerting. A new DMV sys.dm_db_log_info is introduced in SQL Server 2017 CTP 2.0 to expose the VLF information similar to DBCC LOGINFO to monitor, alert and avert potential Tlog issues experienced by customers.

In addition to sys.dm_db_log_info, a new DMF sys.dm_db_log_stats(database_id) will released in upcoming CTP release of SQL Server 2017 which will expose aggregated transaction log information per database. We will share more details on this DMF once it is released.

Thank you to all the SQL Community members in sharing your valuable feedback and making SQL Server 2017 smarter and a preferred choice of RDBMS for customers.