Last year, in the SQLCAT lab we were working with an early adopter customer running pre-release SQL Server 2016 on Windows Server 2016 Tech Preview 4. The workload being used was the ASP.NET session state workload: the session state data was stored in a non-durable memory-optimized table and for best performance, we used natively compiled stored procedures.

In the lab tests, we were easily able to exceed the performance of the same workload running on SQL Server 2014 with comparable hardware. However, at some point, we found that CPU was our sole bottleneck, with all the available CPUs maxed out at 100% usage.

We started our investigation by using the regular tools such as DMVs, performance counters and execution plans:

At this point it was clear we needed to ‘go deeper’ and look at the lower-level elements within the SQL process contributing to CPU usage on this box to see if we could optimize the workload further.

Since this was a high CPU problem and we wanted to get right to the ‘guts’ of the issue, we used the Windows Performance Toolkit, a great set of tools provided as part of the Windows SDK. Specifically, we used the command line tool called XPERF to capture a kernel level trace of the activity on the system. Specifically, we used a very basic and relatively lightweight capture initiated by the following command line:

This command ‘initializes’ a kernel logger which starts capturing critical traces. To stop the tracing (and we did this within a minute of starting, because these traces get very large very quickly!) we issued the following command:

The output produced by the above command is an ETL file which can then be analyzed using the Windows Performance Analyzer (WPA) tool. WPA is typically run on another system, in my case it was my own laptop where I had access to the Internet. The reason Internet access is important is because WPA can use ‘symbol files’ which contain more debugging information, specifically the DLL and function names associated with the machine code which was found to be running on the CPU during the trace collection. Once we get function names, it is generally much easier to understand the reason for the high CPU usage.

When we used WPA to analyze the ETL trace collected for the workload running on the RTM installation of SQL Server 2016, we obtained the following result. 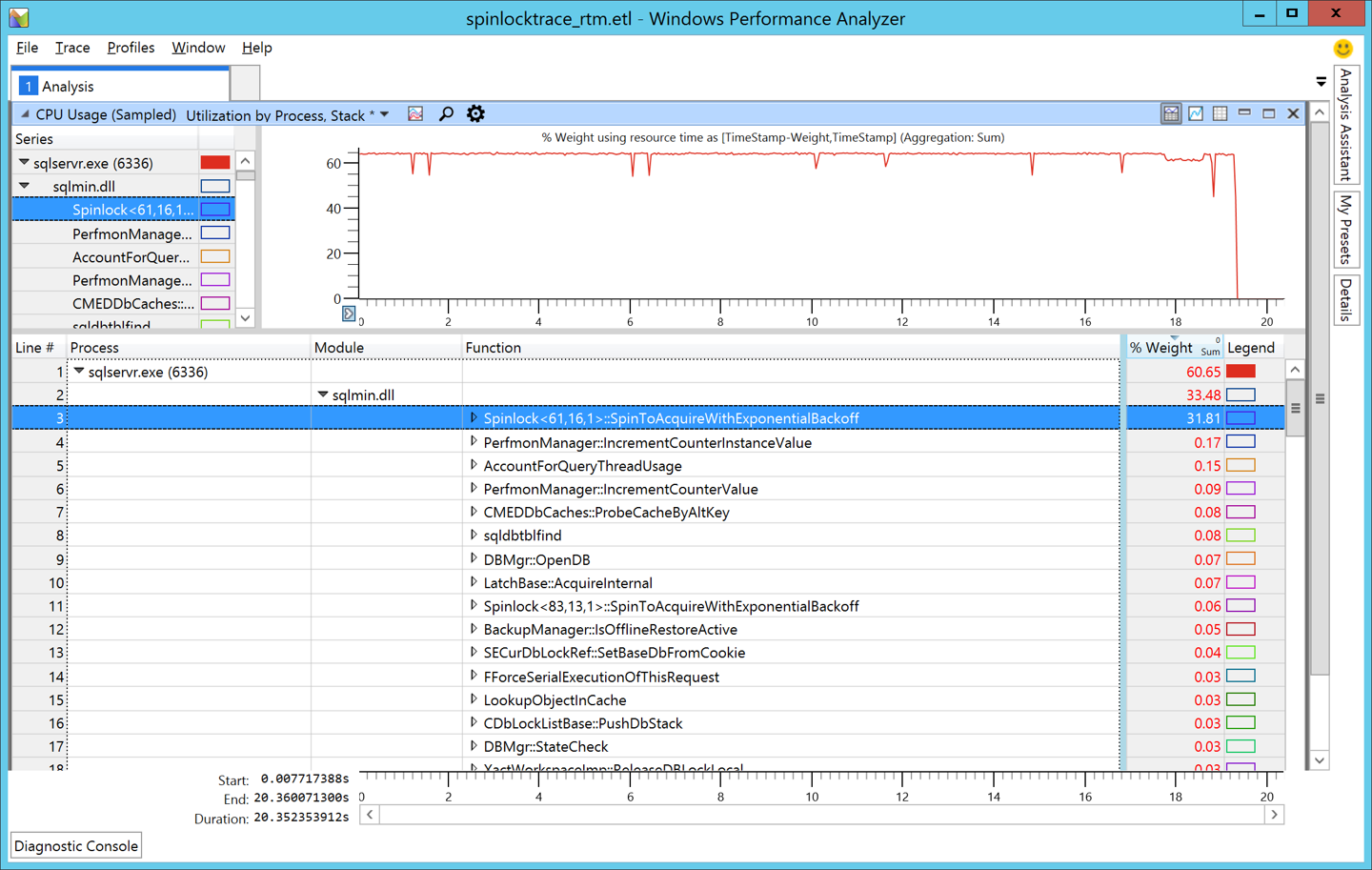 The important thing to notice is the function which starts with the words Spinlock<61,16,1>. Notice that the %Weight column for that row is 31.81% which is a sizeable number. To break this down further, we must query the sys.dm_xe_map_values view:

Here is the spinlock associated with the number 61. We get this ‘magic number’ from the output in the XPerf trace. The name of this spinlock with the key 61 is CMED_HASH_SET:

For more information on how to troubleshoot spinlocks and why they can on occasion cause high CPU usage, please refer to this guidance paper which is still very relevant even though it was written in the SQL Server 2008 timeframe. One change to note for sure is that the whitepaper refers to the older ‘asynchronous_bucketizer’ targets for identifying the call stack for the spinlocks with the most contention. In later versions of SQL Server, we need to use the ‘histogram’ target instead. For example, we used this script to create the extended event session:

We use the extended event session output to validate the ‘call stack’ (the sequence of calls which led to the spinlock acquisition calls.) This information is very useful for the engineering team to understand the root cause of the spinlock contention, which in turn is useful to arrive at possible fixes.

Why is this spinlock a bottleneck?

The spinlock bottleneck described in this blog post is especially prominent in this ASP.NET session state workload, because everything else (natively compiled procedures, memory optimized tables etc.) is so quick. Secondly, because these spinlocks are shared data structures, contention on them becomes especially prominent with larger number of CPUs.

This CMED_HASH_SET spinlock is used to protect a specific cache of SQL Server metadata, and the cache is looked up for each T-SQL command execution. At the high levels of concurrency (~ 640000 batch requests / second), the overhead of protecting access to this cache via spinlocks was a huge chunk (31.81%) of overall CPU usage.

The other thing to note is that the cache is normally read-intensive, and rarely updated. However, the existing spinlock does not discriminate between read operations (multiple such readers should ideally be allowed to execute concurrently) and write operations (which have to block all other readers and writers to ensure correctness.)

The developers then took a long hard look at how to make this more efficient on such large systems. As described before, since operations on the cache are read-intensive, there was a thought to leverage reader-writer primitives to optimize locking. However, any changes to this spinlock had to be validated extensively before releasing publicly as they may have a drastic impact if incorrectly implemented.

The implementation of the reader / writer version of this spinlock was an intricate effort and was done carefully to ensure that we do not accidentally affect any other functionality. We are glad to say that the final outcome, of what started as a late night investigation in the SQLCAT lab, has finally landed as an improvement which you can use! If you download and install Cumulative Update 2 for SQL Server 2016 RTM, you will observe two new spinlocks in the sys.dm_os_spinlock_stats view:

These are improved reader/writer versions of the original spinlocks. For example, LOCK_RW_CMED_HASH_SET is basically the replacement for CMED_HASH_SET, the spinlock which was the bottleneck in the above case.

Putting this to the test in our lab, we recently ran the same workload with CU2 installed. For good measure, we collected a similar XPERF trace. On analyzing the XPERF trace, we can clearly see the spinlock is gone from the top consumer list, and that we have some in-memory OLTP code (as identified by the HkProc prefixes) on top of the list. This is a good thing because our workload is comprised of natively compiled procedures and that is getting most of the time to execute! 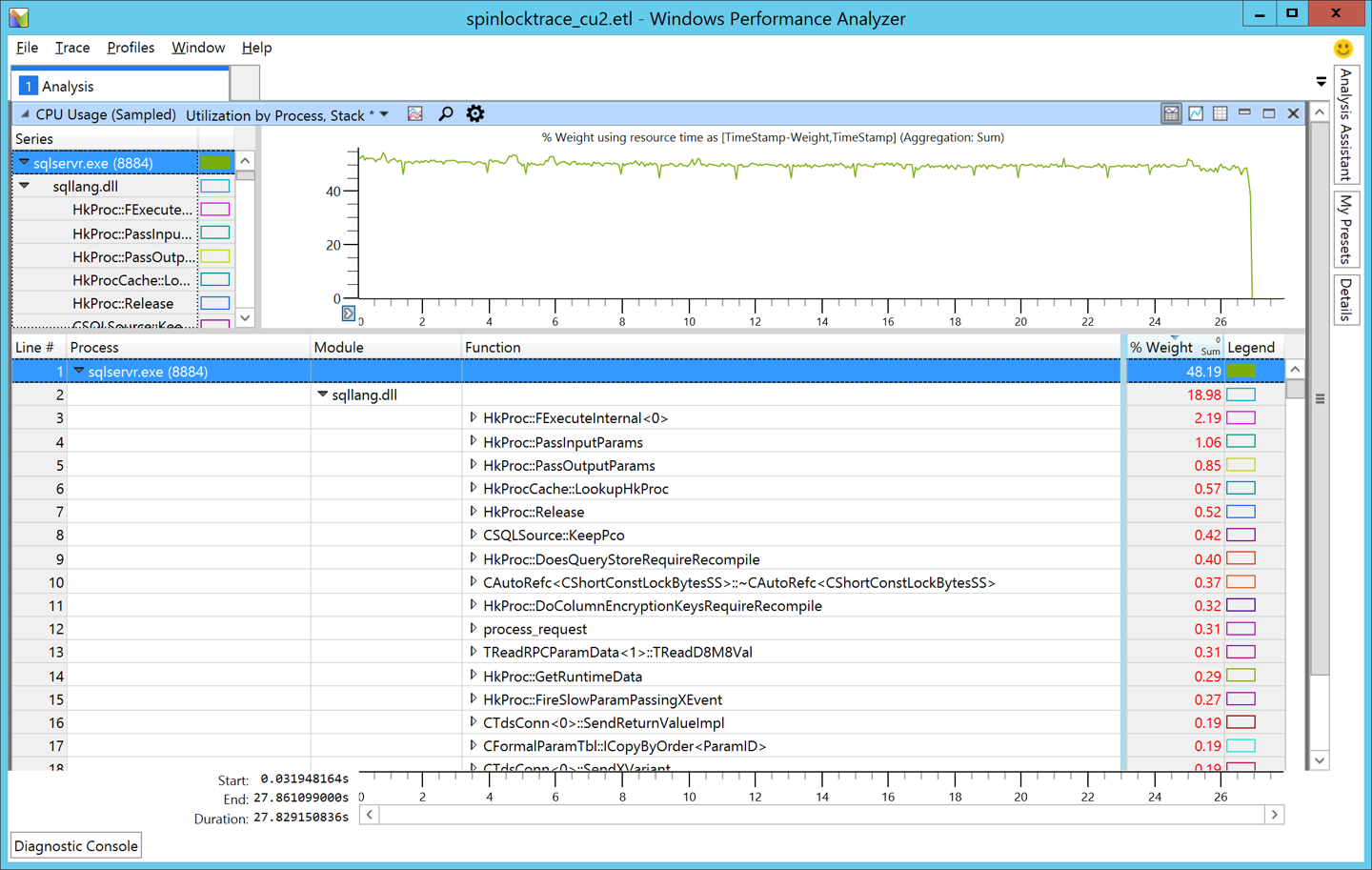 We saved the best for the last! The results of the workload test against CU2 speak for themselves: 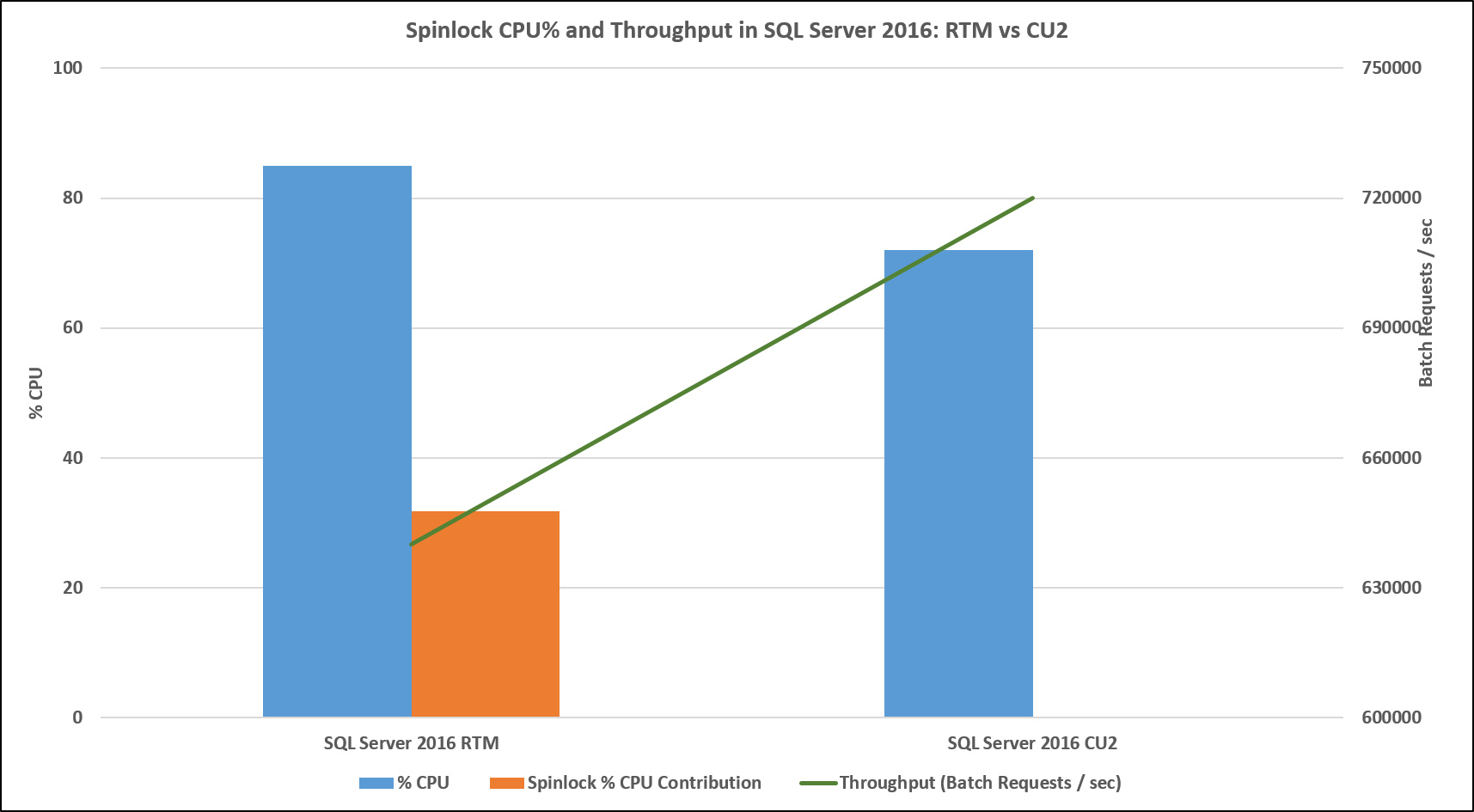 As you can see, there was an almost 13% improvement in workload throughput, at a corresponding reduced CPU usage of 13%! This is great news for those mission critical workloads, because you can do even more in the headroom made available now.

Hardware is constantly evolving to previously unthinkable levels. Terabytes of RAM and hundreds of cores on a single server is common today. While these ‘big boxes’ eliminate some classic bottlenecks, we may end up unearthing newer ones. Using the right tools (such as XPerf, WPA, XEvents in the above example) is critical to precisely identifying the bottleneck.

Finally, identifying these issues / tuning opportunities during the pre-release phase of the product lifecycle is really useful as it gives adequate time for the appropriate fixes to be thought through, implemented correctly, validated in lab tests and then finally released.

We hope you enjoyed this walkthrough! Do let us know if you have any questions or comments. We are eager to hear from you!