In the previous blog https://blogs.msdn.microsoft.com/sqlserverstorageengine/2016/01/10/clustered-columnstore-index-data-load-optimizations-minimal-logging/ , we looked at minimal-logging when bulk importing data into a table with clustered columnstore index. In this blog, we will look at parallel bulk import.

Recall that on rowstore tables (i.e. the tables organized as rows not as columnstore), SQL Server requires you to specify TABLOCK for parallel bulk import to get minimal logging and locking optimizations. One key difference for tables with clustered columnstore index is that you don’t need TABLOCK for getting locking/logging optimizations for bulk import. The reasons for this difference in behavior is that each bulk import thread can load data exclusively into a columnstore rowgroup. If the batch size < 102400, then the data is imported into a delta rowgroup otherwise a new compressed rowgroup is created and the data is loaded into it. Let us take two following interesting cases to show this bulk import behavior. Assume you are importing 4 data files, each with one bulk import thread, concurrently into a table with clustered columnstore index

Let us now look at three examples with bulk import with the focus on locking behavior as this will determine if we can bulk import in parallel or not.
begin tran 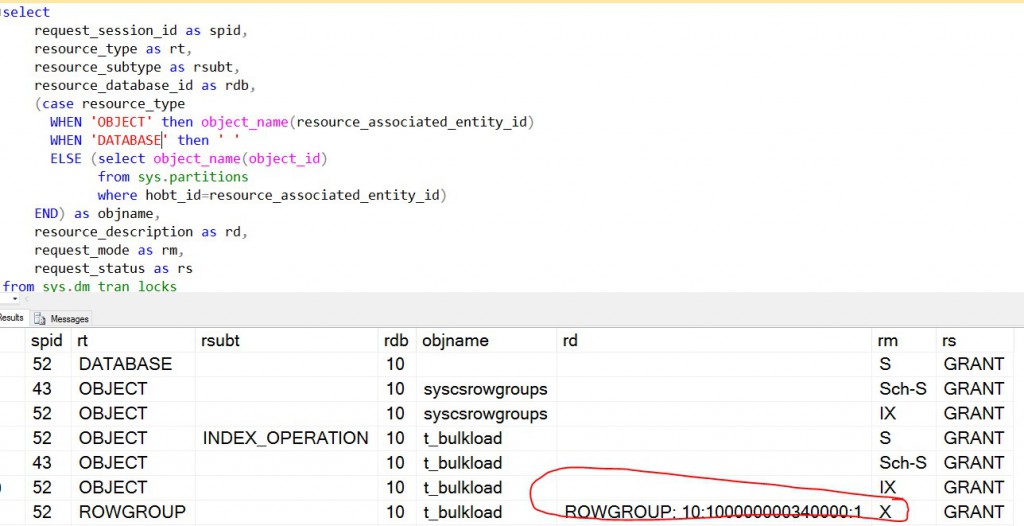 Example-2: Load the data same as in example-1 but use TABLOCK as follows. Key thing to note here is that this bulk import gets X lock on the table which means all other concurrent bulk import threads will get blocked! Unlike rowstore where TABLOCK hints leads to BU lock which allows parallel bulk import threads, there is no such lock supported or needed for clustered columnstore index.
begin tran

Here are the locks. Note, that it gets X lock on PAGE(s) and EXTENT(s) as well. Given that X lock delta rowgroups was acquired, there is actually no need to have locks on PAGE/EXTENT. We will look into this in future as the recommended case  is to load the data directly into compressed rowgroup

In summary, when bulk importing data into clustered columnstore index, choose a batchsize > 102400 and donot use TABLOCK hint