In any new tech, there are lots of thoughts around “best practices”. When a tech is new, what makes a best practice?
Working at Microsoft, running the Azure Container Registry (ACR), talking with lots of customers, some that use Azure and some that don’t, we’ve had a lot of exposure to what customers have encountered. We’ve been working on a number of scenarios, including container life cycle management and OS & Framework patching with containers. This has surfaced a number of interesting issues. Issues that suggest, “both sides” of the tagging argument  have value.
It’s easy to get caught up, arguing a particular best practice, …if you don’t first scope what you’re practicing. I'll start by outlining two basic versioning schemes we’ve found map to the most common scenarios. And, how they are used together to solve the container life cycle management problem.

The most basic container scenario supports restart type policies. docker run --restart always myunstableimage:v0 This helps when a container fails due to some internal reasoning. But, the host is still available. In this case, our code must be resilient. Or, to an old friends point (Pat Helland), "we must write our software with a apology based computing approach." Apology based computing suggest our code must deal with "stuff" that happens. A set of code, or a container may fail and need to re-run that logic.

For the purposes of tagging, I'll stay focused on the other aspect; we must assume a container host may fail at any point. Orchestrators will re-provision the failed node, requiring a new docker pull. Which begs the question: when you have a collection of containers running the same workload, do you want them to all run the same workload, or some of them have the last version, while new nodes have a newer version?

In the above diagram, we have:

A few things here. While many would argue Kubernetes has become the defacto standard for container orchestrators, orchestration is a generalized concept. Over time, we expect orchestration to just become the underpinnings to higher level services. But, that's another post...

At this point, you likely see where this is going. 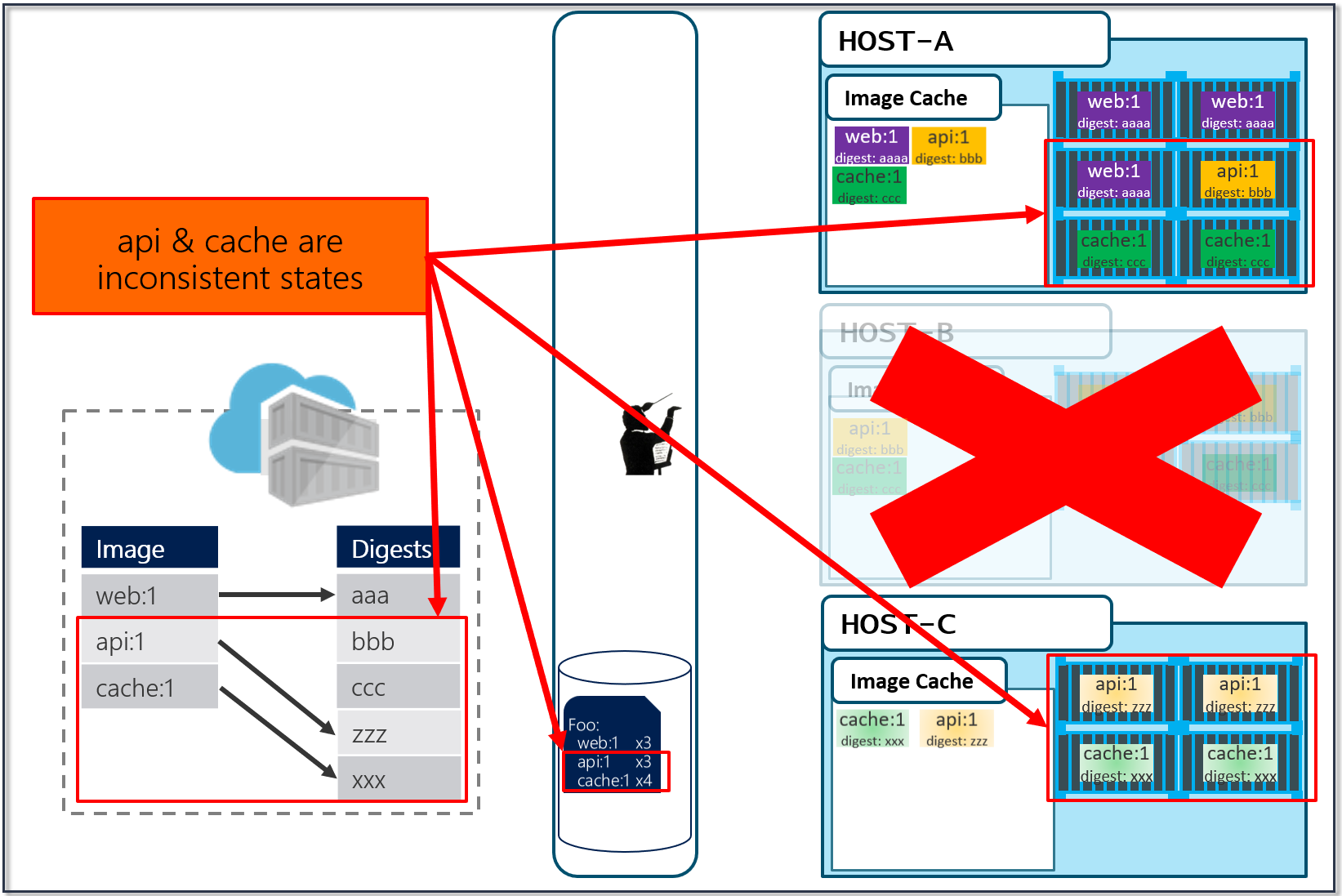 Is this the desired state you want? The orchestrator did it's job. It was told to deploy and maintain a given set of images.

The problem was actually further upstream, when we re-used the same tag for our images.

While I believe in "never say never", using stable tags for deployments are fraught with problems. However, Stable Tags do have their value.

Let's consider what happens when developers stop checking in code changes. In the VM world, Ops would continue to patch the running hosts for updates to the framework and patches to the host operating system. And, at some point, those patches may break the apps running on those nodes. One of the many benefits of containers are the ability to isolate the things our apps and services depend upon. Those dependencies are contained within our image, declared within our dockerfile.

In the above example, we can see two images. The aspnetcore-build:2.0 image to compile our code, then we copy the output from our build image to an optimized asnetcore:2.0 image. See: .NET and MultiStage Dockerfiles for more details

For the focus of tagging and OS & Framework patching, notice our base image, used for the image we actually deploy.

You can see we're using the stable tag, 2.0.  This is where semantic versioning does play a role. The ASP.NET Core team releases new capabilities, indicated by the major version. They shipped 1.0, 2.0 and you can imagine they'll continue to ship new capabilities. In the real world, new capabilities means things change, behaviors change, and thus, you want the development team to make a conscious choice which major version of aspnetcore they depend upon. This basic pattern is used across all major frameworks, java, go, node, etc.

While the team focuses on new capabilities, they must also service each version. The aspnetcore image contains aspnetcore, dotnet core, as well as linux or windows server nanao base layers, depending on which architecture you're running. How do you get OS & Framework updates? Should you have to bump your FROM statement for every release? While the team will publish additional tags for minor, non-breaking changes, each team does update their stable major tags.

This does mean, depending on when you pull aspnetcore:2.0, you'll get different content. But, that's the intent. Whenever you pull the stable tag, you should get the latest OS & Framework patched image. I say should as not all repo owners do proper maintenance on their images. Why, because it's actually pretty hard. (insert smallest fiddle)  .

To stay focused on tagging schemes, I'll point you this post on OS & Framework Patching with Docker Containers – a paradigm shift.

What Tagging Scheme Should I Use?

Stable tags mean a developer, or a build system can continue to pull a specific tag, which continues to get updates. Stable doesn't mean the contents are frozen, rather stable implies the image should be stable, for the intent of that version. To keep it "stable", it's serviced to keep the evil people from corrupting our systems. (ok, evil can also be a simple mistake that has huge impacts)

A framework team ships 1.0. They know they'll ship updates, including minor updates. To support stable tags for a given major and minor version, they have two sets of stable tags.

In the above example, updates are provided for the specific versions. In this case, both the major and minor tags are continually being serviced. From a base image scenario, this allows the image owner to provide serviced images.

If you really wanted to bind to a specific image, that never changes, you'd set your FROM statement to the digest.

However, I'd highly suggest "never" doing binding to a digest. Yeah, I went there - never.  If you bind to the digest, how would you get servicing of your base image?

Unique tagging simply means, every image pushed has a unique tag. Tags are "never" reused. We've had a number of customers request the ability to enforce this policy, which we'll be adding to ACR. Along with several other policies.

What value should use for your unique tags?

There are a number of options.

Whew, that was a lot... As with many things, an answer, especially a best practice, depends on ___. Hopefully I've given some context for the various tagging schemes, and the reasoning behind them.

You may have a good reason for deploying stable tags such as a test environment. But, just realize that images will be updated underneath, and you can very easily spend hours troubleshooting a node that pulled a slightly different version of that tag.

Some things to also consider:

When you stop learning, you start dying... PowerPoint deck with the animations used in the gifs