A few years ago I build and shared the source code for a Word to Xaml Converter, a Word 2007 add-in that developers could use to convert Microsoft Office Word documents to Xaml for WPF and Silverlight applications.  Since it was originally published, the solution has been downloaded more than 3,000 times and I’ve received lots of feedback on it, progressively enhancing it to handle more Word features in the Xaml conversion.  I built the converter as a .NET library and a Word COM add-in, both built in C#.

Now with Office 2013 and Office 365, there is a new development model where developers can build “Apps for Office” using HTML, CSS, and JavaScript to build apps that can be added to Microsoft Office.  With this, Microsoft also launched an Apps for Office store where these apps can be listed and sold.  I was able to take what I built earlier as a Word add-in and move it to the cloud with Microsoft Azure Websites and listed it in the Apps for Office store.  This enables users of Office 2013 and Office 365 to now use the Xaml Generator in Microsoft Office Word wherever they are seeing it.

With this new App for Office, you select the text that you want to convert in Microsoft Word and then press the [Generate Xaml] button.  The generated text is then put in the task pane which you can then copy to Visual Studio to use in an app.  With this new release, I added Windows Xaml which can be used for Windows Universal Apps released for Windows 8.1 and Windows Phone 8.1. 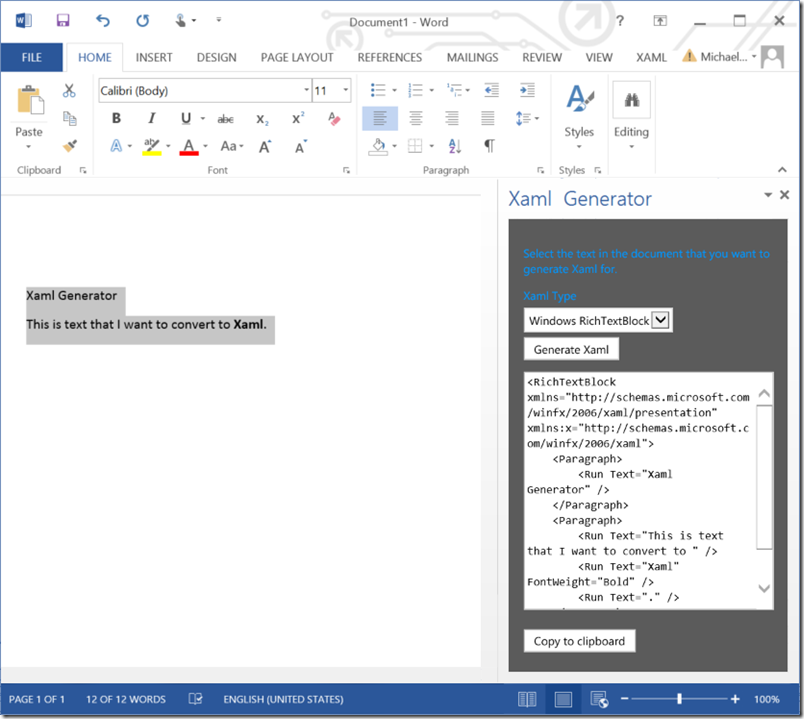 To use the Xaml Generator in Word 2013

I’d loved your feedback on the app as it’s my first App for Office.