What is Cluster Aware Updating in Windows Server 2012? (Part 1)

Summary: This article has been contributed by Ryan Doon , a PFE working with Microsoft Canada. In this post (the first of a two part series), he talks about the new Cluster Aware Updating feature of Windows Server 2012, and how it can be used to easily update clustered servers while maintaining availability of service to clients.

Windows Server 2012 is yet another great addition to the Microsoft product family. I always get asked the question “What are the differences between server 2008 and 2012?” For that reason I will be making various posts either comparing features in 2008 to how it has been improved in 2012, or an overview of new features in 2012.

In a previous post I discussed the best practices for patching Windows Server 2003 & 2008 clusters. Previous to Server 2012, the best method for patching clusters was the manual method. Relying on scripts or third party tools would not always ensure that patching proceeded as expected. The purpose of this post is to give you a brief introduction to a new feature called Cluster Aware Updating (CAU), and in a later post I will take you through a live demo.

The good news is that in Server 2012 we have something called Cluster Aware Updating (CAU) that is meant to provide a reliable and automated method of patching clusters. When the feature is installed, instead of manually having to choose which updates the nodes need and applying them one at a time, you can allow the CAU service to determine the required updates by pointing to sources such as Windows Update Agent(WUA), Windows Server Update Services(WSUS), or even choose a location on a file share.

So how does CAU orchestrate the installation of updates on a cluster? 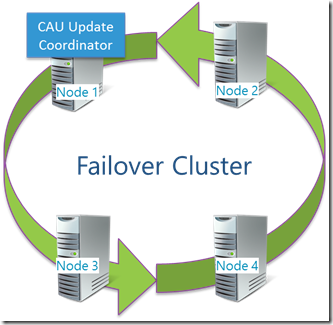 On the other hand, the remote updating mode allows for a remote machine running Server 2012 or Windows 8 to act as the CAU update coordinator. Utilizing this method is good for those that want to see the real-time progress of the updates, and for using CAU with windows 2012 Server Core.

CAU provides administrators with an easy-to-use GUI to determine which updates need to be installed, and when they should be installed.

CAU can be triggered using the GUI or you can utilize the included PowerShell cmdlets. As you see from the brief introduction above, CAU and many other features in Server 2012 strive to make the life of an administrator a lot easier.

Stay tuned for my next post where I will walk you through a live demo of CAU!