What version of Team Foundation Server do I have?

Team Foundation Server has improved a lot over the years. From being deployed to physical machine(s) to the cloud.
There has been a variation in terms of updates pushed to Team Foundation Server from 2005 to the latest version (2013). In simple terms, in 2005, 2008 and 2010, the updates were given out as Service Packs and from 2012 we’ve started rolling out “Updates”.

From TFS 2010 onwards, it’s simple to check the Product Version. It is displayed on the Application Tier Summary, under Version.

However, in older versions, i.e. 2005 and 2008, where there is no Admin Config UI, you need to manually find out the version by finding out the file version of the Microsoft.TeamFoundation.Server.dll file. 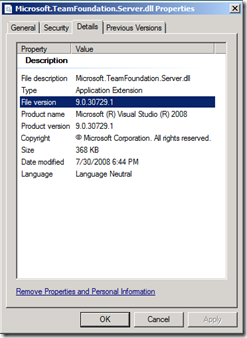 Note: You can also check for TFS 2010 and above like this. In case the Admin Console doesn’t open, this can be used as an alternative method.

From TFS 2015, we have added a way to check this from the Web Access, 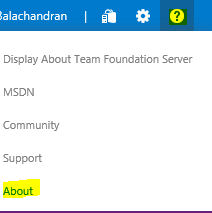 The below chart lists the TFS Versions with Product Version number.

This post will be updated as and when new updates/versions get released.