Office 365: Challenges with Distribution Groups for Migrated Mailboxes and a Script Based Solution ( Script Version 1.1 ) 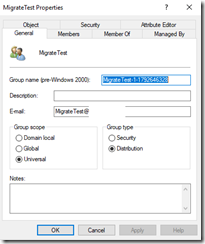 The same process is not available to administrators in Office 365.  When a distribution list is provisioned in Office 365 the group type selected is persisted.  If the group is created as a mail distribution group it can only be converted to a mail security group if deleted and recreated.  This would essentially prevent administrators from applying security rights to a group in the future.

Version 1.1 of the script implements a switch –GroupTypeOverride.  The administrator may specify a value of “DISTRIBUTION” or “SECURITY”.  This value will override the group type specified when creating the Office 365 distribution group.  In essence a security group on-premises may now be created as a distribution group in Office 365.

Here is an example of command execution: