To the rescue steps forward the Distributed Cache service. Based upon the AppFabric Cache Service, this is a requirement for SharePoint that is installed by the pre-requisite installer as part of your farm setup.

It’s not just social data that benefits from being cached. The Distributed Cache service also caches Newsfeeds, Microblogging, Conversations, Security Trimming, OneNote client access and more! In fact, it even takes away the necessity of farms that use Claims Authentication to implement session affinity load balancing.

How to plan for the Distributed Cache Service

Each item of data stored by the Distributed Cache is stored once only, and exists only on one server at a time. It’s worth noting that although AppFabric supports high availability, the SharePoint implementation of the Distributed Cache does not. If one of your cache servers dies, the cached items will be lost. In practice this means that performance will be reduced for that data until another Cache Host in the Cluster picks up that data.

If you plan to have more than one Cache Host, the first server added should be configured to allow inbound ICMPv4 traffic. If you are using Windows Firewall, you can enable this in PowerShell with the Set-NetFirewallRule cmdlet. The name of the rule is “File and Printer SharePoint (Echo request – ICMPv4-In)”. Notice also that it doesn’t take a Boolean ($true), but rather the string “True” as an argument to the -Enabled parameter. Don’t forget to Import-Module NetSecurity first, though! 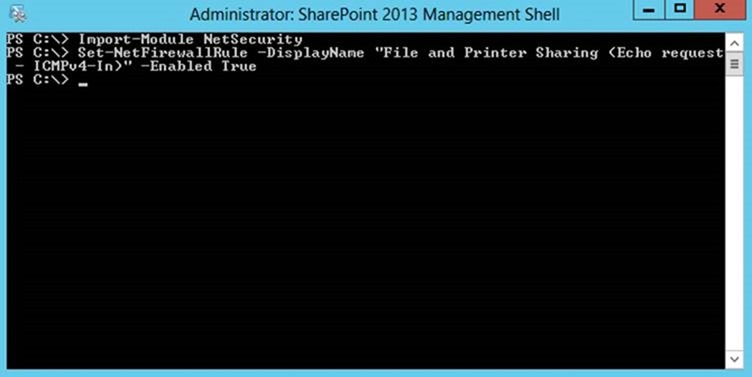 Starting and Stopping the Service

Once the Distributed Cache service instance is started on any server in your farm, it will become part of your Cache Cluster.

The right way to start the service is with the Add-SPDistributedCacheServiceInstance PowerShell cmdlet. You run this on a SharePoint server you would like to add to your Cache Cluster, which makes the current server a Cache Host. Simply stopping the service instance would cause the contents of the cache on that server to go missing, degrading performance.

If you need to remove a server from the Cache Cluster, the safe way to do this is first to use Stop-SPDistributedCacheServiceInstance with the –Graceful parameter. This transfers any cached data to another server, and can therefore take some time to perform. Afterwards you can safely run Remove-SPDistributedCacheServiceInstance to make the current server a non-Cache Host. 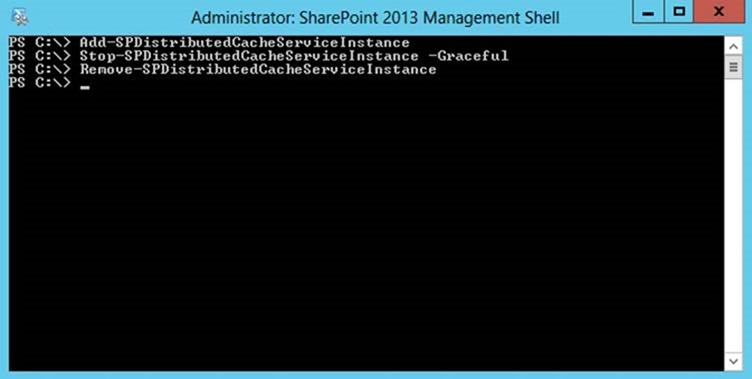 If you get a Health Analyzer Rule violation in Central Administration saying that “The Distributed Cache host may cause cache reliability problems” it is likely that a Distributed Cache service instance has been stopped on a server without removing the server from the Cache Cluster. To resolve this, you can either start the service instance again using the Add-SPDistributedCacheServiceInstance cmdlet, or remove it with Remove-SPDistributedCacheServiceInstance as above.

It is a very strong recommendation that you should not allocate more than 16GB to any one Cache Host. This may cause the Cache Service to timeout during housekeeping operations and become unresponsive for several seconds at a time. If you need a cache size of greater than 16GB, it is better to use multiple servers in a Cache Cluster. You can have up to a maximum of 16 hosts in a Cache Cluster.

For the large farm example, we would use the Update-SPDistributedCacheSize cmdlet with the –CacheSizeInMB parameter specifying 12 as the amount of RAM to allocate. If you need to find out how much RAM is currently allocated, you can issue the Use-CacheCluster and Get-AFCacheHostConfiguration cmdlets. 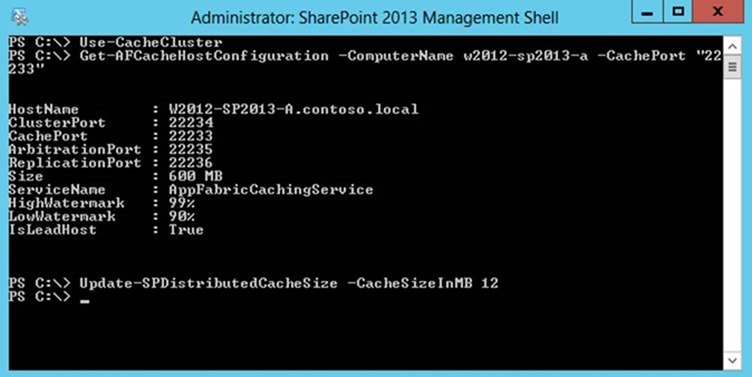 When AppFabric is installed as part of the SharePoint pre-requisites, it is configured to run under the credentials of the server farm. This is far from ideal, and will eventually trigger a violation of a Health Analyzer Rule. To avoid this, you can change the account used by the Distributed Cache service. In the example below, we’re retrieving a managed account that has already been registered with our farm, called “CONTOSO\my_managed_account” with the Get-SPManagedAccount cmdlet. We then set that as the ManagedAccount property of the ProcessIdentity object of the Distributed Cache (“AppFabricCachingService”) SPService. 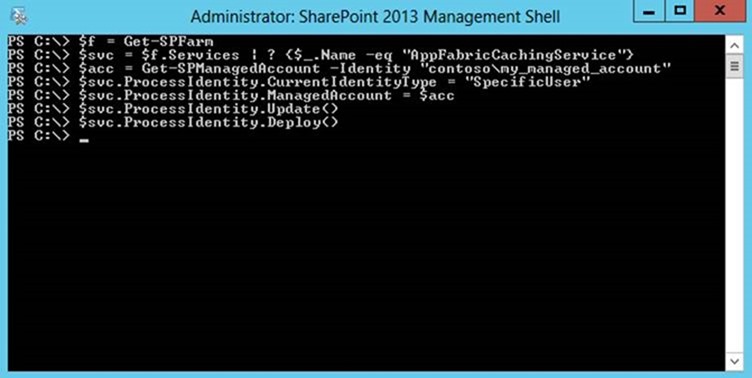 It is possible that after invoking the .Deploy() line in the above PowerShell script you will encounter an error such as “TCP port 22234 is already in use.”

Further attempts to work with the cache might also generate errors such as “Specified host is not present in cluster”:

You may even receive error messages saying “cacheHostInfo is null”.

The Distributed Cache service is an enabler for many of the new social features in SharePoint 2013. We couldn’t have the rapid, almost real-time conversations in SharePoint’s feeds and microblogging features without it. Although it is tricky to configure, the Distributed Cache service is something you need to plan for in your SharePoint 2013 farms, and is best implemented with dedicated servers.

Joel Jeffery is a SharePoint 2013 MCSE and Microsoft Certified Trainer.He runs JFDI Phoenix Ltd, a Microsoft Gold Partner based in Brighton, UK. He and his team provide live SharePoint support for admins, devs, architects and end users at SharePoint Doctors . He’s been working with SharePoint and developing systems in .NET for more than a decade. Joel can also be found teaching a series of SharePoint courses for Firebrand Training . Catch up with Joel at JoelBlogs .