Last week my colleague Sean Nicholson wrote about the refurbished
PC market. While many of the tens of millions of used PCs discarded each
year can be refurbished and reused,
some have reached the end of their life and need to be disposed of properly—which
brought me to Champaign, Illinois this week.

‘Ever wonder what happens to your electronic waste - that
old computer or cell phone that you discard?’
This was just one of the many challenging questions that the students
from University of Illinois had to answer when competing in the first annual Sustainable e-Waste Design Competition.  The goal of the competition was to educate
students, the university community at large and ultimately the nation (and of
course me too!) about the importance of understanding and resolving the growing
international problem of electronic waste.

I was lucky enough to be asked by Willie Cade, CEO of PC Rebuilders and Recyclers based in Chicago, a Microsoft
Authorized Refurbisher, to be one of 10 judges to participate in this great event.  It was a good opportunity to learn from my
fellow judges about their efforts in e-waste management.  There’s a diverse range of groups working to
address this problem – there were representatives from Dell, Wal-Mart, and the
U.S. Environmental Protection Agency, amongst others.

The competition was a grassroots effort.  The students organized a campus-wide e-waste
collection drive and through a very creative promotional campaign they
collected over 650 items weighing over 5 tons , including desktops, laptops,
monitors, keyboards, cell phones, and even overhead projectors!  Some of these PCs can be refurbished and put to reuse,
and some are so old they just needed to be disposed of properly.  The students’ goal was to come up with
creative ways to address the problem of e-waste both locally and beyond.

I think Megan Kenney, an Industrial Design major and a
competitor, summed up the competition brilliantly:

“I realized how much e-waste people
are actually storing because of the mere fact that they are not sure how or
where to discard it. This realization was made even more apparent when the people
driving up in their cars and discarding their e-waste, were thanking us for
taking this waste from them. Through unloading and listening to the responses
of people, I began to think that this collection event was the start of
something much larger than our school. The extent of what was going to be made
from this waste, by the students in the class, was boundless and could possibly
be the solution to a major worldwide problem.” 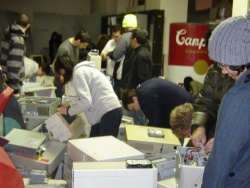 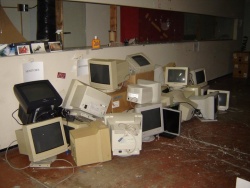 What resonated with me the most was Megan’s enthusiasm,
passion and knowledge around addressing e-waste head on was also shared by her
fellow students which made it particularly difficult in choosing the winners of
the competition.  I was impressed by the
resourcefulness, creativity and ultimately practical application of various
prototypes.  In my next post, I want to
tell you about the winners and their entries.