How to implement feature flags and A|B testing

Finally, continuous integration, testing, and delivery are part of your organization’s engineering process. You understand the cloud and big data; you’ve begun to introduce monitoring into your workflows. Your environments are built on IaC (Infrastructure as Code), and reliability seems to be significantly improved. Your engineering teams are getting comfortable with containers.” But, you know you’ve only just begun.

You’ve taken the first big leap, but the road ahead offers even more opportunities, such as:

One way to keep the pace up, is with the use of feature flags, particularly for A/B testing.

In this first part of the series, we’re going to cover an introduction. In subsequent parts, we’ll focus on “what” and “how” we implemented feature flags and A/B testing.

What are Feature flags and A/B testing?

A 'feature flag' (or Feature Toggle) allows you to turn features (sub-sections) of your application on or off at a moment’s notice. (Read more about feature flags here: Feature flags, Toggles, Controls .) 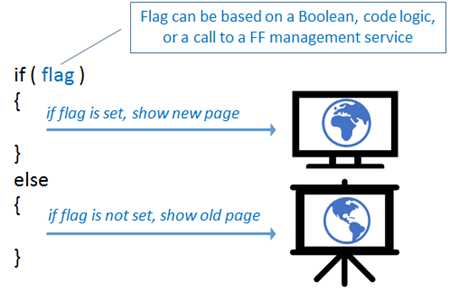 It’s that simple. With a simple change, a 'feature flag' enables you to transform your delivery processes to drive customer feedback, test new mechanisms with less engineering impact, and release software faster, with less risk and greater control of who has access to a feature.

A/B testing (sometimes called split testing),can be viewed as an experiment led by a hypothesis. You compare different versions by showing variants (let's call them A and B) to different users with common attributes, to determine which one performs better. For example, a stakeholder could ask:

Run A/B testing in production using Feature flags to test the hypothesis. As shown, 80% of the users prefer the feature with the navigation pane on the left. Option (B) is more popular and wins! 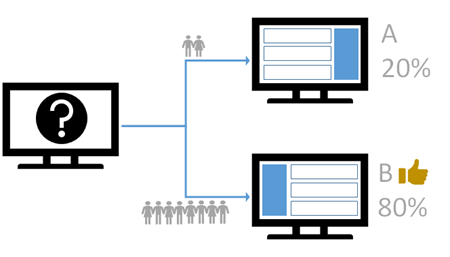 Why should we care about FF?

Feature flags give you the power to reduce risk, iterate quicker, and get more control by separating feature rollout from code deployment.

Capabilities you can achieve with feature flag driven development:

A couple of years ago, Facebook came up with an in-house implementation of feature flags. Facebook calls their tool “Gatekeeper” because it controls consumer access to each new feature.

Feature flags come at a cost!

Where do we stand with feature flags and A|B testing?

We’ve come to the conclusion that we need to invest in feature flags and A|B testing to be able to react to feedback and change, continuously deliver value, and determine user preferences through controlled experiments.

However, based on our research and experience of rolling a custom solution, we recommend that you explore a SaaS solution. We, for example, cannot afford to develop and especially maintain a custom solution. It’s not a scenario that is suited to our community and volunteer driven program.

Watch this space for part 2 of our A|B testing investigations, and good luck with your DevOps journey!