Jasmine is a framework that allows you to write tests in JavaScript for AngularJs or NodeJs applications. In our case, we will use Jasmine to write tests for VSTS extension.

Implementing Jasmine on an Extension Project

The Jasmine Framework is a Jasmine.js library. To retrieve it, we have two possibilities, either with a package Nuget or with an npm package.
In case the extension is developed with Visual Studio, we retrieve the Chutzpah package with Nuget that contains jasmine and its test adapter.

With Visual Studio Code (or with another IDE), we can retrieve this framework with npm with the command.

If you are using Josh Garverick’s Visual Studio Project Templates, all components required to run Jasmine tests are already included in the npm packages configured in the "packages.json" file. 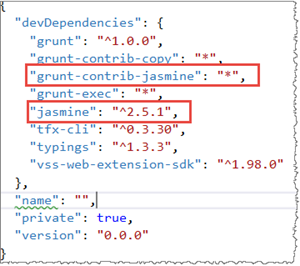 Write your unit tests for your extension

Writing a Jasmine unit test is fairly simple. The Project Template has an example in the test folder in the "testSpec.js" file.

Here is another example:

There are several ways to run Jasmine unit tests. With Visual Studio, you can use a test adapter like Chutzpah, which is one of the best known.  It is installed with Nuget by retrieving the latest version of the Chutzpah package. 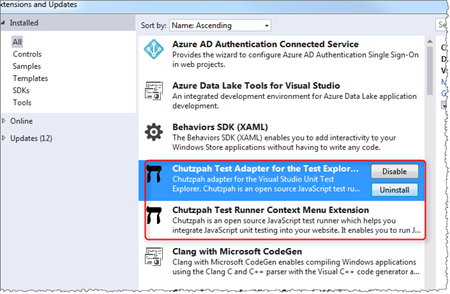 Once installed, the tests appear in the explorer test, and they can be run as unit tests. 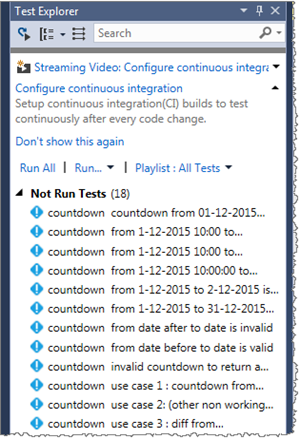 You can use the grunt-contrib-jasmine grunt already existing in the template, and in the "gruntfile.js" file have the jasmine task.

To be able to set Chutzpah parameters, we add a configuration file json (at the root of the project) named "Chutzpah.json". Inside, we specify the file of specs to be executed, the mode of compilation of the typescript files, and the parameters of execution of the code coverage. 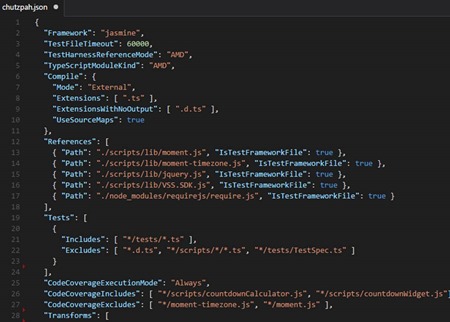 For all details on this file, see https://github.com/mmanela/chutzpah/wiki/Chutzpah.json-Settings-File

IMPORTANT - The following section contains paths as part of the configuration. These are solution-specific and likely to differ in your environment. Use the screenshots and examples as reference only!

To run the JavaScript tests in a build of Continuous Integration in VSTS, add the Test Assemblies task to your build definition. 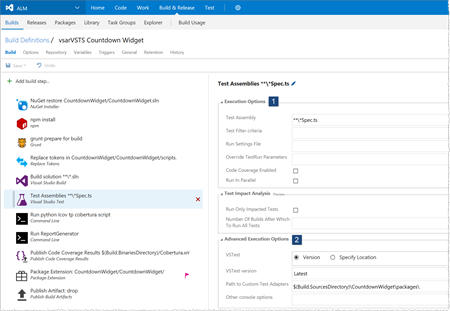 After the build, the results of the tests are obtained in the Summary tab.

And the details on the tests tab. 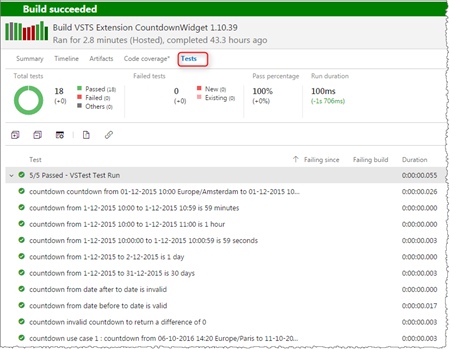 The code coverage indicators provide an indication (in percentage) of the number of lines covered by the tests.

One of the advantages of Chutzpah is that it allows this analysis and generates a report during the tests execution.
To activate it, add the parameters in the configuration file of chutzpah. 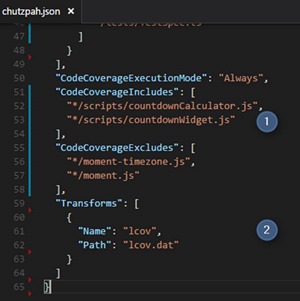 With this configuration, the code coverage analysis will be done automatically at the same time that the tests will be executed, so there is nothing more to configure in the build.

After the build runs, the result of the analysis is visible in the summary tab.

Having this percentage is a good indication, but it's better to have a detailed report that indicates on each file the lines that are not covered by the tests in order to improve them.

In the result of the VSTS builds, the code coverage tab allows you to display this report, which is in the Jacoco or Cobertura format.

The problem we have is that the report generated by Chutzpah is in lcov format, so in the build execution convert this report into a report summary of type Cobertura, then, in html format, and, finally, publish this report.

Once the build is running, you get the report in the Code Coverage tab. 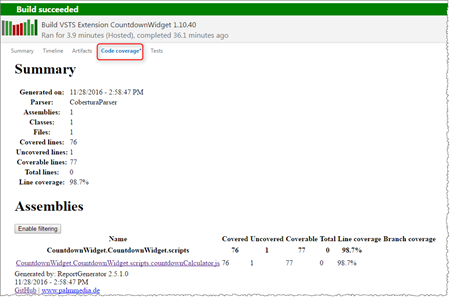