This post briefly discusses the new configuration auditing functionality to trace the changes done to the IIS configuration store. This is similar to the Metabase Auditing which was available in IIS 6.0 with SP1 on Windows 2003 Server; you can refer this KB article which talks about enabling metabase auditing on IIS 6.0 (with SP1).

What is Configuration Auditing?

IIS configuration auditing is a feature that would let you monitor the changes that are done to the IIS configuration store. It generates event messages (similar to those generated by enabling metabase auditing in the previous versions). It would display the configuration element which was changed, user who initiated the change, and the original and the new value of the element.

Why do you need to turn it on on your server?

There are times when the admin wants to monitor the changes done to the IIS config store. A classic situation is when someone had accidentally changed some settings on the server which then affected the website. Or there might be some scripts running in the background which changed few properties which affected the website behavior. So, you want to know the change made to the IIS configuration, and the process and the user who initiated that change. Turning on the IIS configuration auditing helps you in getting that information when the change is made next time.

IIS configuration Auditing is a feature which is available only with IIS versions from 7.5 which is shipped with Windows Server 2008 R2 (and Windows 7).

To enable the configuration auditing feature, follow the below steps: 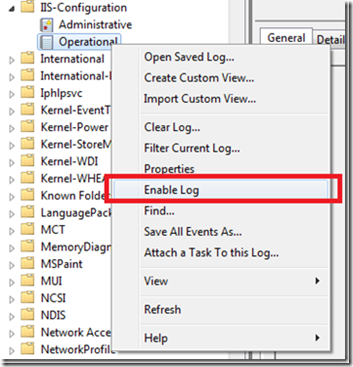 By default, the log file would be saved in %SystemRoot%\System32\Winevt\Logs\Microsoft-IIS-Configuration%4Operational.evtx. You can change it by clicking on the “Properties”, and changing the “Log Path”. You can also consider changing other parameters like the maximum size of the file, when to clear the logs, etc. in the properties window.

After enabling, you would see corresponding events in this event viewer log whenever there is a change to the IIS configuration store.

Below is a sample event which occurred when I changed the port number in the binding of the website by directly editing it in the IIS manager.

There are a few important things which might be useful here in this event log entry. First is the Process ID, this will give you the PID of the process which was changing the entry. You can find the process name by looking at the task manager for this corresponding PID.

This event also shows the username which initiated the change. This is a very important data if you are tracking who changed certain IIS configuration. This in fact gives you the Security Identifier of the username (SID), and you can find the username by using psgetsid which is a part of our Windows Sysinternals tools (usage: psgetsid <SID>).

Will it affect my server’s performance?

This would be a question in every admin’s mind whenever they turn on any auditing, or logging functionality on their servers. IIS configuration auditing utilizes the Windows ETW subsystem which would be able to handle thousands of events per second without any noticeable CPU overhead. But, you can limit the size of the log file that this IIS configuration auditing generates. You can change the size of the file in the “Properties” section of the Operational logs.