In Windows Server 2008 R2 (WS2008R2), Terminal Services (TS) has been expanded and renamed to Remote Desktop Services (RDS). RDS is the backbone of Microsoft's VDI solutions. And in Windows Server 2012, RDS is further enhanced and with a scenario-based configuration wizard. Still the concept and architecture remain very much the same since WS2008R2. The new and enhanced architecture takes advantage of virtualization and makes remote access a much flexible solution with new deployment scenarios. To realize the capabilities of RDS, it is essential to understand the functions of key architectural components and how they complement one another to process a RDS request. There are many new terms and acronyms to get familiar with in the context of RDS. For the remainder of this post, notice RDS implies the server platform of WS2008R2 and later, while TS implies WS2008.

There are five main architectural components in RDS, as shown, and all require a RDS licensing server. Each component includes a set of features designed to achieve particular functions. Together, the five form a framework for accessing Terminal Services applications, remote desktops, and virtual desktops all with WS2008R2 capabilities. Essentially, WS2008R2 offers a set of building blocks with essential functions for constructing enterprise remote access infrastructure. 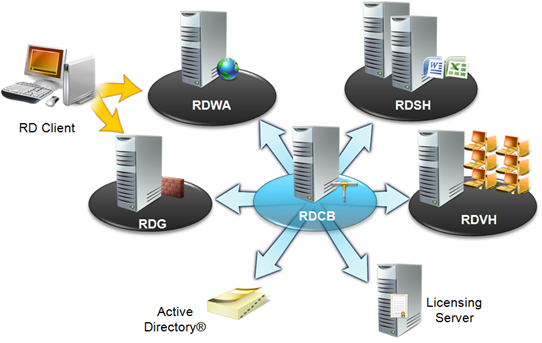 To start, a user will access a RDS webpage by specifying an URL where RDS resources are published to. This interface, provided by Remote Desktop Web Access (RDWA) and configured with a local IIS with SSL, is the web access point to RemoteApp and VDI. The URL is consistent regardless how resources are organized, composed, and published from multiple RDS session hosts behind the scene. By default, RDS publishes resources at https://the-FQDN-of-a-RDWA-server/rdweb and this URL is the only information a system administrator needs to provide to a user for accessing authorized resources via RDS. A user will need to be authenticated with one’s AD credentials when accessing the URL and the RemoteApp programs presented by this URL is trimmed with access control list. Namely, an authenticated user will see and be able to access only authorized RemoteApp programs.

Remote Desktop Gateway (RDG) is optional and functions very much the same with that in TS. A RDG is to be placed at the edge of a corporate network to filter out incoming RDS requests by referencing criteria defined in a designated Network Policy Server (NPS). With a server certificate, RDG offers secure remote access to RDS infrastructure. As far as a system administrator is concerned, RDG is the boundary of a RDS network. There are two policies in NPS relevant to an associated RDG:

In RDS, applications are installed and published in a Remote Desktop Session Host (RDSH) similar to a TS Session Host, or simply a Terminal Server in a TS solution. A RDSH loads applications, crunches numbers, and produces results. It is our trusted and beloved working horse in a RDS solution. Digital signing can be easily enabled in a RDSH with a certificate. Multiple RDSHs can be deployed along with a load balancing technology. Which requires every RDSH in a load-balancing group to be identically configured with the same applications.

Remote Desktop Virtualization Host (RDVH) is a new feature which serves requests for virtual desktops running in virtual machines, or VMs. A RDVH server is a Hyper-V based host, for instance a Windows Server with Hyper-V server role enabled. When serving a VM-based request, an associated RDVH will automatically start an intended VM, if the VM is not already running. And a user will always be prompted for credentials when accessing a virtual desktop. However, a RDVH does not directly accept connection requests and it uses a designated RDSH as a “redirector” for serving VM-based requests. The pairing of a RDVH and its redirector is defined in Remote Desktop Connection Broker (RDCB) when adding a RDVH as a resource.

Remote Desktop Connection Broker (RDCB), an expansion of the Terminal Services Session Broker in TS, provides a unified experience for setting up user access to traditional TS applications and virtual machine (VM)-based virtual desktops. Here, a virtual desktop can be running in either a designated VM, or a VM dynamically picked based on load balancing from a defined VM pool. A system administrator will use the RDCB console, called Remote Desktop Connection Manager, to include RDSHs, TS Servers, and RDVHs such that those applications published by the RDSHs and TS Servers, and those VMs running in RDVHs can be later composed and presented to users with a consistent URL by RDWA. And with this consistent URL, authenticated users can access authorized RemoteApp programs and virtual desktops.

A Remote Desktop (RD) Client gets connection information from the RDWA server in a RDS solution. If a RD client is outside of a corporate network, the client connects through a RDG. If a RD client is internal, the client can then directly connect to an intended RDSH or RDVH once RDCB provides the connection information. In both cases, RDCB plays a central role to make sure a client gets connected to a correct resource. With certificates, a system administrator can configure digital signing and single sign-on among RDS components to provide a great user experience with high security. 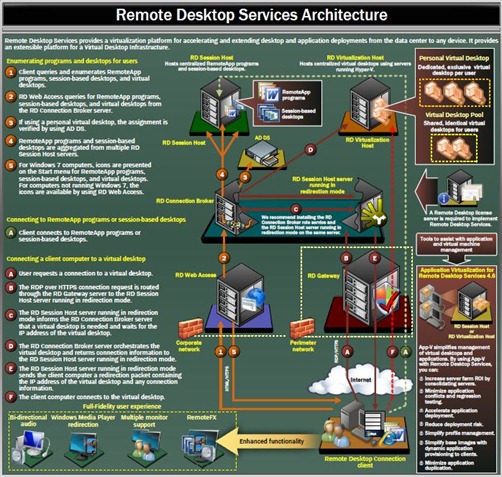 Conceptually, RDCB is the chief intelligence and operation officer of a RDS solution and knows which is where, whom to talk to, and what to do with a RDS request. Before a logical connection can be established between a client and a target RDSH or RDVH, RDCB acts as a go-between passing and forwarding pertinent information to and from associated parties when serving a RDS request. From a 50,000-foot view, a remote client uses RDWA/RDG to obtain access to a target RDSH or RDVH, while RDCB connects the client to a session on the target RDSH, or an intended VM configured in a target RDVH. Above is a RDS architecture poster with visual presentation on how all flow together. https://aka.ms/free has number of free e-books and this poster for additional information of WS2008R2 Active Directory, RDS, and other components.

The configuration in WS2008 is a bit challenging with many details easily overlooked. Windows Server 2012 has greatly improved the user experience by facilitating the configuration processes with a scenario-based wizard. Stay tuned and I will further discuss this in an upcoming blog post series.