This article shows you how to take advantage of Azure DevOps REST APIs to build continuous integration and continuous deployment (CI/CD) pipelines. Depending on the workload, the build steps in pipelines can vary. Every team has a preferred number of environments within their Azure subscriptions, that depend on their internal systems and business scenarios. These decisions will influence the number of stages in the Azure pipelines.

By using Azure DevOps service hooks and REST APIs, an event (such as the first push into the repository) can set off a series of steps and can construct the total development path for the repository. Developers can see their changes in minutes, and they no longer need to repeatedly set up Azure pipelines to create developer, test, and production environments in Azure.

By using the solution described in this article, your engineering team can focus on projects that create value for your customers.

The following services are used in this solution:

Here's a list of the real-world benefits of using this solution: 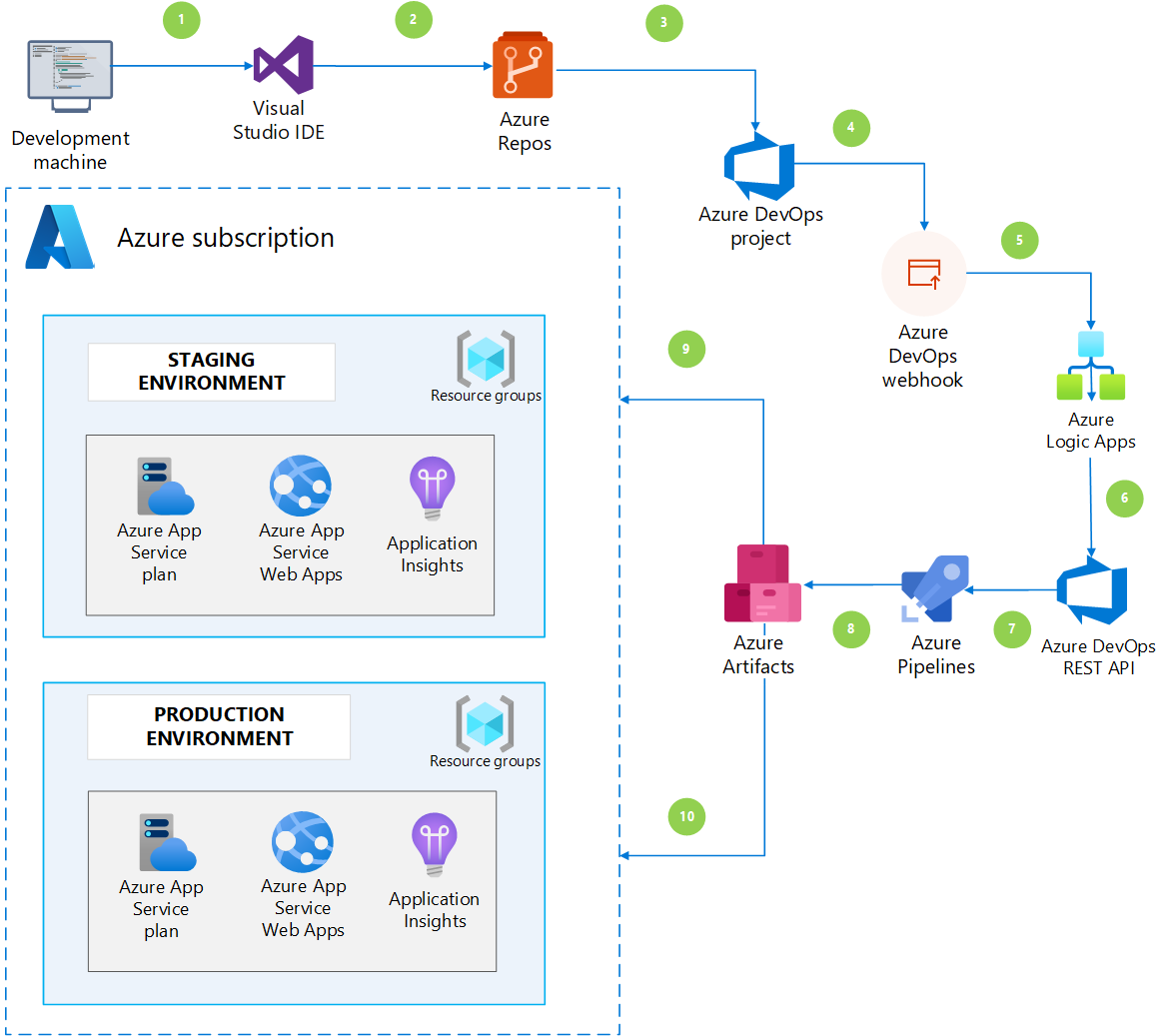 This architecture reduces labor by automatically provisioning pipelines in Azure DevOps, which in turn provisions the infrastructure in Azure and deploys the artifact automatically. Within minutes, developers can see their changes in production. The feedback loop from code to customer is also reduced.

An alternative to the proposed architecture is Azure DevOps Starter service. Azure App Service also supports Deployment Center. However, this alternative requires you to provision the infrastructure first. The proposed solution in this architecture is code first, which provisions the infrastructure through code. This gives you the flexibility to use any kind of Azure workload. For more information, see DevOps Starter and Deployment Center.

This section covers the considerations when automating multistage pipelines with Azure Pipelines.

This architecture uses Logic Apps and Azure DevOps REST API, which makes these Azure services compliant with most solution requirements.

Some features, like approval gates for Azure DevOps environments, cannot be directly modified in YAML templates and needs to be manually configured. Also, use variable groups to configure sensitive parameters in multistage pipeline YAML templates.

The logic apps that are invoked with git commit can run on any of the available plans, and doesn't use a standard HTTP connector. The base pricing of the logic app depends on the type of plan the logic app is provisioned. For this solution, we suggest running the logic app on a standard plan. For more information on pricing, see Logic Apps pricing.

You can find the source code, deployment files, and instructions to test this scenario on GitHub: