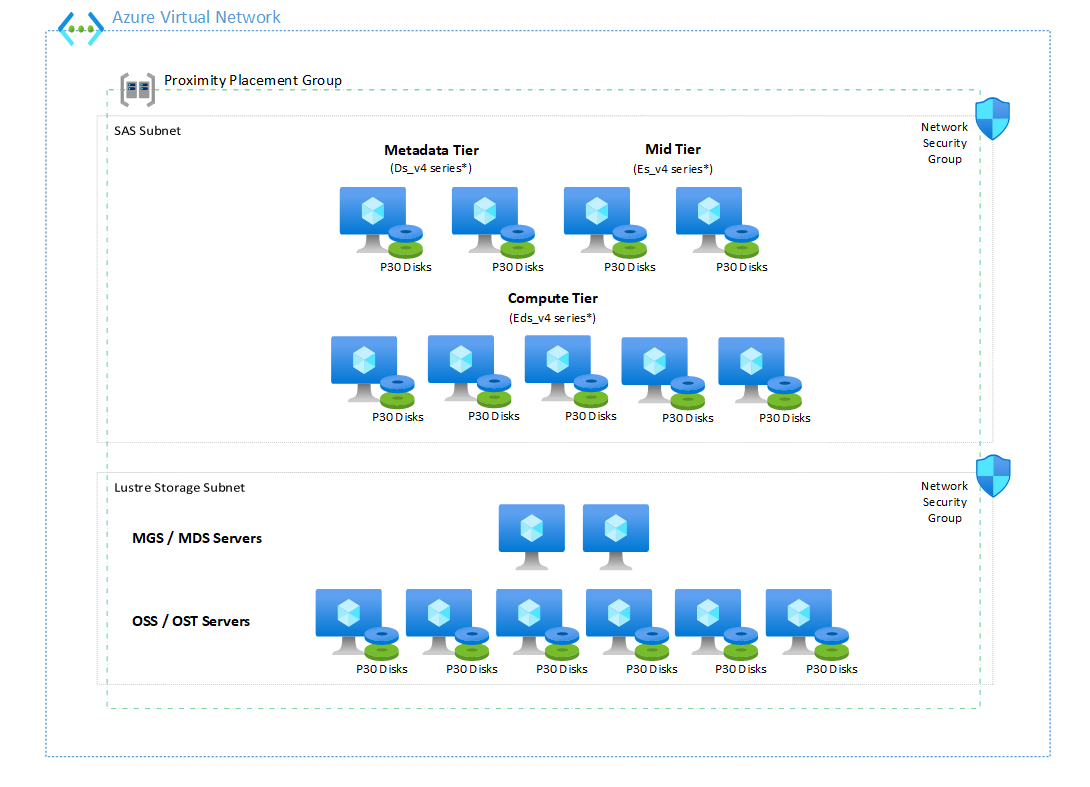 An Azure Virtual Network isolates the system in the cloud. Within that network:

Before deploying a SAS workload, ensure the following components are in place:

Along with discussing different implementations, this guide also aligns with Microsoft Azure Well-Architected Framework tenets for achieving excellence in the areas of cost, DevOps, resiliency, scalability, and security. But besides using this guide, consult with a SAS team for additional validation of your particular use case.

As partners, Microsoft and SAS are working to develop a roadmap for organizations that innovate in the cloud. Both companies are committed to ensuring high-quality deployments of SAS products and solutions on Azure.

SAS analytics software provides a suite of services and tools for drawing insights from data and making intelligent decisions. SAS platforms fully support its solutions for areas such as data management, fraud detection, risk analysis, and visualization. SAS offers these primary platforms, which Microsoft has validated:

The following architectures have been tested:

This guide provides general information for running SAS on Azure, not platform-specific information. These guidelines assume that you host your own SAS solution on Azure in your own tenant. SAS doesn't host a solution for you on Azure. For more information on the Azure hosting and management services that SAS provides, see SAS Managed Application Services.

Consider the points in the following sections when designing your implementation.

SAS documentation provides requirements per core, meaning per physical CPU core. But Azure provides vCPU listings. On the VMs that we recommend for use with SAS, there are two vCPU for every physical core. As a result, to calculate the value of a vCPU requirement, use half the core requirement value. For instance, a physical core requirement of 150 MBps translates to 75 MBps per vCPU. For more information on Azure computing performance, see Azure compute unit (ACU).

For more information about specific SAS releases, see the SAS Operating System support matrix. In environments that use multiple machines, it's best to run the same version of Linux on all machines. Azure doesn't support Linux 32-bit deployments.

To optimize compatibility and integration with Azure, start with an operating system image from Azure Marketplace. If you use a custom image without additional configurations, it can degrade SAS performance.

When choosing an operating system, be aware of a soft lockup issue that affects the entire Red Hat 7.x series. It occurs in these kernels:

A problem with the memory and I/O management of Linux and Hyper-V causes the issue. When it comes up, the system logs contain entries like this one that mention a non-maskable interrupt (NMI):

Another issue affects older versions of Red Hat. Specifically, it can happen in versions that meet these conditions:

When the system experiences high memory pressure, the generic Linux NVMe driver may not allocate sufficient memory for a write operation. As a result, the system reports a soft lockup that stems from an actual deadlock.

Upgrade your kernel to avoid both issues. Alternatively, try this possible workaround:

Run these commands to adjust that setting:

VMs in the Edsv5-series are the default SAS machines for Viya and Grid. They offer these features:

If the Edsv5-series VMs are unavailable, it's recommended to use the prior generation. The Edsv4-series VMs have been tested and perform well on SAS workloads.

In some cases, the locally attached disk doesn't have sufficient storage space for SASWORK or CAS_CACHE. To get a larger working directory, use the Ebsv5-series of VMs with premium attached disks. These VMs offer these features:

If the Edsv5-series VMs offer enough storage, it's better to use them as they're more cost efficient.

Many workloads use M-series VMs, including:

Certain I/O heavy environments should use Lsv2-series or Lsv3-series VMs. In particular, implementations that require fast, low latency I/O speed and a large amount of memory benefit from this type of machine. Examples include systems that make heavy use of the SASWORK folder or CAS_CACHE.

SAS optimizes its services for use with the Intel Math Kernel Library (MKL).

When possible, avoid using Lsv2 VMs. Please use the Lsv3 VMs with Intel chipsets instead.

With Azure, you can scale SAS Viya systems on demand to meet deadlines:

SAS workloads are often chatty. As a result, they can transfer a significant amount of data. With all SAS platforms, follow these recommendations to reduce the effects of chatter:

SAS has specific fully qualified domain name (FQDN) requirements for VMs. Set machine FQDNs correctly, and ensure that domain name system (DNS) services are working. You can set the names with Azure DNS. You can also edit the hosts file in the etc configuration folder.

Turn on accelerated networking on all nodes in the SAS deployment. When you turn this feature off, performance suffers significantly.

To turn on accelerated networking on a VM, follow these steps:

When you migrate data or interact with SAS in Azure, we recommend that you use one of these solutions to connect on-premises resources to Azure:

For production SAS workloads in Azure, ExpressRoute provides a private, dedicated, and reliable connection that offers these advantages over a site-to-site VPN:

Be aware of latency-sensitive interfaces between SAS and non-SAS applications. Consider moving data sources and sinks close to SAS.

SAS platforms can use local user accounts. They can also use a secure LDAP server to validate users. We recommend running a domain controller in Azure. Then use the domain join feature to properly manage security access. If you haven't set up domain controllers, consider deploying Azure Active Directory Domain Services (Azure AD DS). When you use the domain join feature, ensure machine names don't exceed the 15-character limit.

In some environments, there's a requirement for on-premises connectivity or shared datasets between on-premises and Azure-hosted SAS environments. In these situations, we strongly recommended deploying a domain controller in Azure.

The Azure AD DS forest creates users that can authenticate against Azure AD devices but not on-premises resources and vice versa.

If you can't move data sources close to SAS infrastructure, avoid running analytics on them. Instead, run extract, transform, load (ETL) processes first and analytics later. Take the same approach with data sources that are under stress.

SAS and Microsoft have tested a series of data platforms that you can use to host SAS datasets. The SAS blogs document the results in detail, including performance characteristics. The tests include the following platforms:

SAS offers performance-testing scripts for the Viya and Grid architectures. The SAS forums provide documentation on tests with scripts on these platforms.

DDN, which acquired Intel's Lustre business, provides EXAScaler Cloud, which is based on the Lustre parallel file system. The solution is available in the Azure Marketplace as part of the DDN EXAScaler Cloud umbrella. Designed for data-intensive deployment, it provides high throughput at low cost.

Tests show that DDN EXAScaler can run SAS workloads in a parallel manner. DDN recommends running this command on all client nodes when deploying EXAScaler or Lustre:

Consider the following points when using this service:

The output of your SAS workloads can be one of your organization's critical assets. SAS output provides insight into internal efficiencies and can play a critical role in reporting strategy. It's important, then, to secure access to your SAS architecture. To achieve this goal, use secure authentication and address network vulnerabilities. Use encryption to protect all data moving in and out of your architecture.

Azure delivers SAS by using an infrastructure as a service (IaaS) cloud model. Microsoft builds security protections into the service at the following levels:

Carefully evaluate the services and technologies that you select for the areas above the hypervisor, such as the guest operating system for SAS. Make sure to provide the proper security controls for your architecture.

Use network security groups to filter network traffic to and from resources in your virtual network. With these groups, you can define rules that grant or deny access to your SAS services. Examples include:

Server-side encryption (SSE) of Azure Disk Storage protects your data. It also helps you meet organizational security and compliance commitments. With Azure managed disks, SSE encrypts the data at rest when persisting it to the cloud. This behavior applies by default to both OS and data disks. You can use platform-managed keys or your own keys to encrypt your managed disk.

Control access to the Azure resources that you deploy. Every Azure subscription has a trust relationship with an Azure AD tenant. Use Azure role-based access control (Azure RBAC) to grant users within your organization the correct permissions to Azure resources. Grant access by assigning Azure roles to users or groups at a certain scope. The scope can be a subscription, a resource group, or a single resource. Make sure to audit all changes to infrastructure.

Manage remote access to your VMs through Azure Bastion. Don't expose any of these components to the internet:

It's best to deploy workloads using an infrastructure as code (IaC) process. SAS workloads can be sensitive to misconfigurations that often occur in manual deployments and reduce productivity.

When building your environment, see quickstart reference material in these repositories:

For help getting started, see the following resources:

For help with the automation process, see the following templates that SAS provides: