The example workload discussed below describes building out a simulation that runs automatically and assesses simulated vehicle function via an Azure DevOps pipeline. This pipeline runs each time an engineer checks a new version of the example function's source code or its simulation environment. 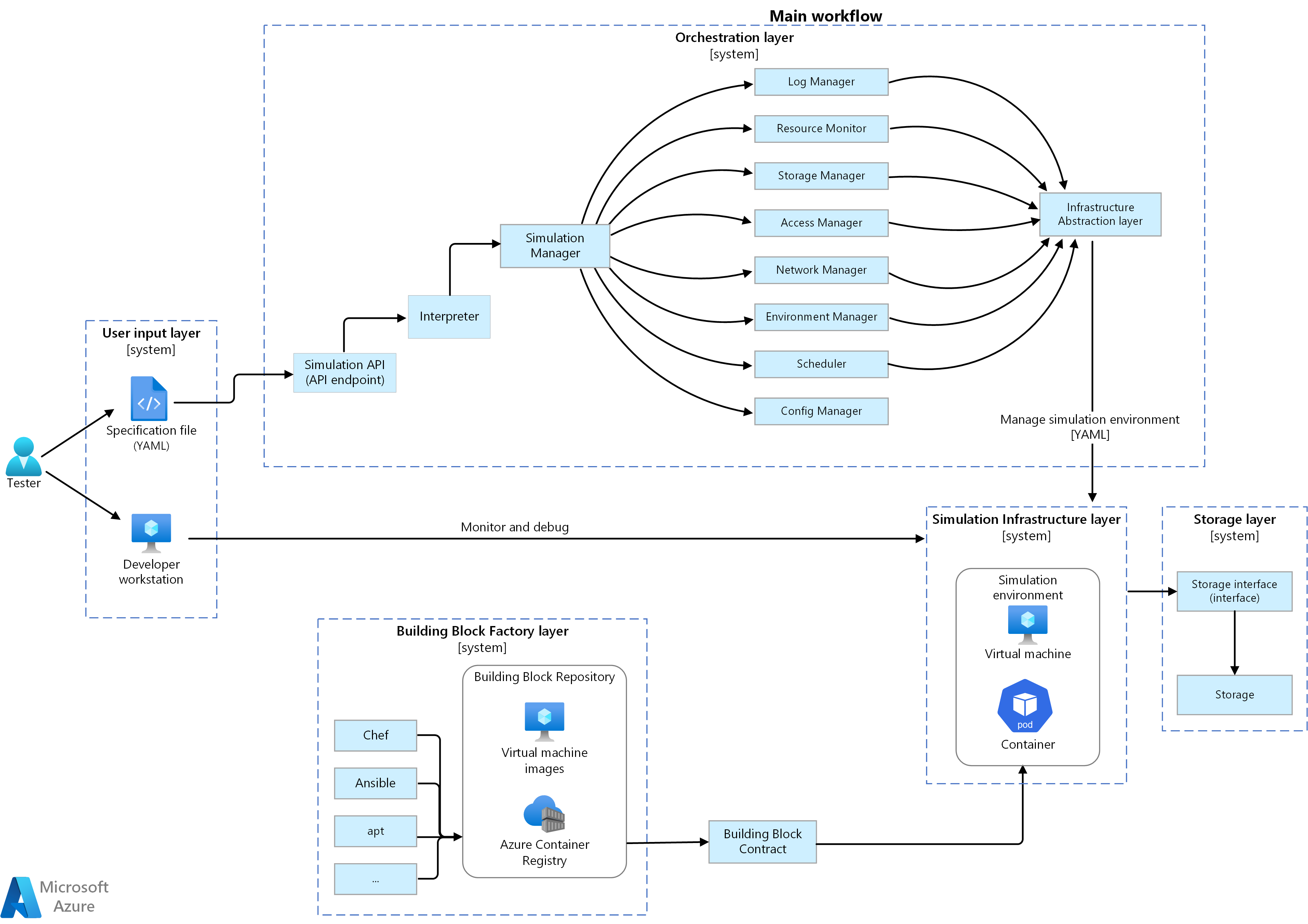 The developer will only interact with this layer. It contains the developer workstation (an Azure VM in our scope) and the specification file describing the simulation environment.

"Orchestration" has a broad meaning: some of the problems described by the word are trivially solved; others are much more complex. For example, the "orchestration" problem of creating, monitoring, and destroying containers and VMs is solved by many tools—the Azure API itself is a sufficient "orchestrator" for that!

However, it's important to break down the black box of "orchestration" into smaller components.

The Orchestration Layer is the primary focus of this example workload.

This layer durably and accessibly stores the results of the simulation. It's primarily the responsibility of the mobile application development platform (MADP) Data Lake workstream, though your output has to be manageable by that team.

Azure Virtual Machines provides on-demand, scalable computing resources that give you the flexibility of virtualization, without having to buy and maintain the physical hardware.

Azure Pipelines are part of the Azure DevOps Services and run automated builds, tests, and deployments. You can also use third-party CI/CD solutions such as Jenkins.

Azure Monitor collects monitoring telemetry from a variety of on-premises and Azure sources. This service aggregates and stores telemetry in a log data store that's optimized for cost and performance.

This architecture uses VMs and containers for deploying the different tools and services. As an alternative, you can also use Azure Kubernetes Services (AKS). AKS offers serverless Kubernetes, an integrated CI/CD experience, and enterprise-grade security and governance.

The storage mechanism used for saving simulation results in this architecture is based on Azure Blob Storage or Azure Disk Storage. As an alternative for bigger workloads, you can also look at Azure's large-scale data and analytics solutions for storing and analyzing data.

Also consider using Azure Monitor to analyze and optimize the performance of your infrastructure, and to monitor and diagnose networking issues without logging into your VMs.

A test vehicle is autonomously driving at 80 mph in the right lane on a 3-lane highway. There is a truck 600 ft ahead driving in the same lane and in the same direction at 55 mph. There is no vehicle nearby in the middle lane. The road markers are visible, the sun is shining perpendicular to the vehicle, and the road is dry.

To run a simulation, AD function engineers commonly use a set of software applications. These can include Virtual Test Drive (VTD), Time Partition Testing (TPT), Avionics Development System 2G (ADS2), and Automotive Data and Time-Triggered Framework (ADTF), all of which communicate with each other according to their specific configurations for testing a given autonomous driving function such as the Highway Pilot. A deployment of this set of software tools and their configurations to physical and/or virtual machines (VMs) on-premises and/or in the cloud is called a simulation environment.

To ensure the validity of the test results generated by every simulation you run, you should ensure the simulation starts in a fresh simulation environment set to its initial state.

This solution is ideal for the automotive and transportation industries. Typical uses for this workload include:

An availability set is a logical grouping of VMs that allows Azure to understand how your application is built to provide for redundancy and availability.

Availability zones are unique physical locations within Azure regions that help protect VMs, applications, and data from datacenter failures. Each zone is made up of one or more datacenters. VMs and applications in zones can remain available even if there's a physical failure in a single datacenter.

You can scale Azure VMs either manually or by using autoscaling features.

For container deployments, Azure Containers Instances and Azure Kubernetes Services are also designed to scale up or out manually or automatically.

As with any other type of application, the simulation environment can be designed to handle sensitive data. Therefore, you should restrict who can sign in and use it, and you should also limit what data can be accessed based on the user's identity or role. Use Azure AD for identity and access control, and use Azure Key Vault to manage keys and secrets.

For deploying fresh simulation environments, it's best to use CI/CD processes using a solution such as Azure DevOps or GitHub Actions, as described in the Azure DevOps Starter documentation.

In general, use the Azure pricing calculator to estimate costs. You can also optimize your costs by following the process to right-size the capacity of your VMs from the beginning, along with simplified resizing as needed. Other considerations are described in the Cost section in Microsoft Azure Well-Architected Framework.