It can be challenging to create a reliable continuous integration/continuous delivery (CI/CD) process for a microservices architecture. Individual teams must be able to release services quickly and reliably, without disrupting other teams or destabilizing the application as a whole.

This article describes an example CI/CD pipeline for deploying microservices to Azure Kubernetes Service (AKS). Every team and project is different, so don't take this article as a set of hard-and-fast rules. Instead, it's meant to be a starting point for designing your own CI/CD process.

The goals of a CI/CD pipeline for Kubernetes hosted microservices can be summarized as follows:

For purposes of this example, here are some assumptions about the development team and the code base:

These assumptions drive many of the specific details of the CI/CD pipeline. However, the basic approach described here be adapted for other processes, tools, and services, such as Jenkins or Docker Hub.

The following are common alternatives customers might use when choosing a CI/CD strategy with Azure Kubernetes Service:

Suppose that a developer is working on a microservice called the Delivery Service. While developing a new feature, the developer checks code into a feature branch. By convention, feature branches are named feature/*.

The build definition file includes a trigger that filters by the branch name and the source path:

Using this approach, each team can have its own build pipeline. Only code that is checked into the /src/shipping/delivery folder triggers a build of the Delivery Service. Pushing commits to a branch that matches the filter triggers a CI build. At this point in the workflow, the CI build runs some minimal code verification:

The goal is to keep build times short so that the developer can get quick feedback. Once the feature is ready to merge into master, the developer opens a PR. This operation triggers another CI build that performs some additional checks:

In Azure DevOps Repos, you can define policies to protect branches. For example, the policy could require a successful CI build plus a sign-off from an approver in order to merge into master.

At some point, the team is ready to deploy a new version of the Delivery service. The release manager creates a branch from the main branch with this naming pattern: release/<microservice name>/<semver>. For example, release/delivery/v1.0.2.

The creation of this branch triggers a full CI build that runs all of the previous steps plus:

Assuming this build succeeds, it triggers a deployment (CD) process using an Azure Pipelines release pipeline. This pipeline has the following steps:

Even in a monorepo, these tasks can be scoped to individual microservices so that teams can deploy with high velocity. The process has some manual steps: Approving PRs, creating release branches, and approving deployments into the production cluster. These steps are manual; they could be automated if the organization prefers.

When possible, package your build process into a Docker container. This configuration allows you to build code artifacts using Docker and without configuring a build environment on each build machine. A containerized build process makes it easy to scale out the CI pipeline by adding new build agents. Also, any developer on the team can build the code simply by running the build container.

By using multi-stage builds in Docker, you can define the build environment and the runtime image in a single Dockerfile. For example, here's a Dockerfile that builds a .NET application:

This Dockerfile defines several build stages. Notice that the stage named base uses the .NET runtime, while the stage named build uses the full .NET SDK. The build stage is used to build the .NET project. But the final runtime container is built from base, which contains just the runtime and is significantly smaller than the full SDK image.

Another good practice is to run unit tests in the container. For example, here is part of a Docker file that builds a test runner:

A developer can use this Docker file to run the tests locally:

The CI pipeline should also run the tests as part of the build verification step.

Note that this file uses the Docker ENTRYPOINT command to run the tests, not the Docker RUN command.

Here are some other best practices to consider for containers:

Consider using Helm to manage building and deploying services. Here are some of the features of Helm that help with CI/CD:

A single microservice may involve multiple Kubernetes configuration files. Updating a service can mean touching all of these files to update selectors, labels, and image tags. Helm treats these as a single package called a chart and allows you to easily update the YAML files by using variables. Helm uses a template language (based on Go templates) to let you write parameterized YAML configuration files.

For example, here's part of a YAML file that defines a deployment:

You can see that the deployment name, labels, and container spec all use template parameters, which are provided at deployment time. For example, from the command line:

Although your CI/CD pipeline could install a chart directly to Kubernetes, we recommend creating a chart archive (.tgz file) and pushing the chart to a Helm repository such as Azure Container Registry. For more information, see Package Docker-based apps in Helm charts in Azure Pipelines.

Helm charts always have a version number, which must use semantic versioning. A chart can also have an appVersion. This field is optional and doesn't have to be related to the chart version. Some teams might want to application versions separately from updates to the charts. But a simpler approach is to use one version number, so there's a 1:1 relation between chart version and application version. That way, you can store one chart per release and easily deploy the desired release:

Another good practice is to provide a change-cause annotation in the deployment template:

You can also use the helm list command to view the revision history:

Based on the CI flow described earlier in this article, a build pipeline might consist of the following tasks:

The following diagram shows the end-to-end CI/CD process described in this article: 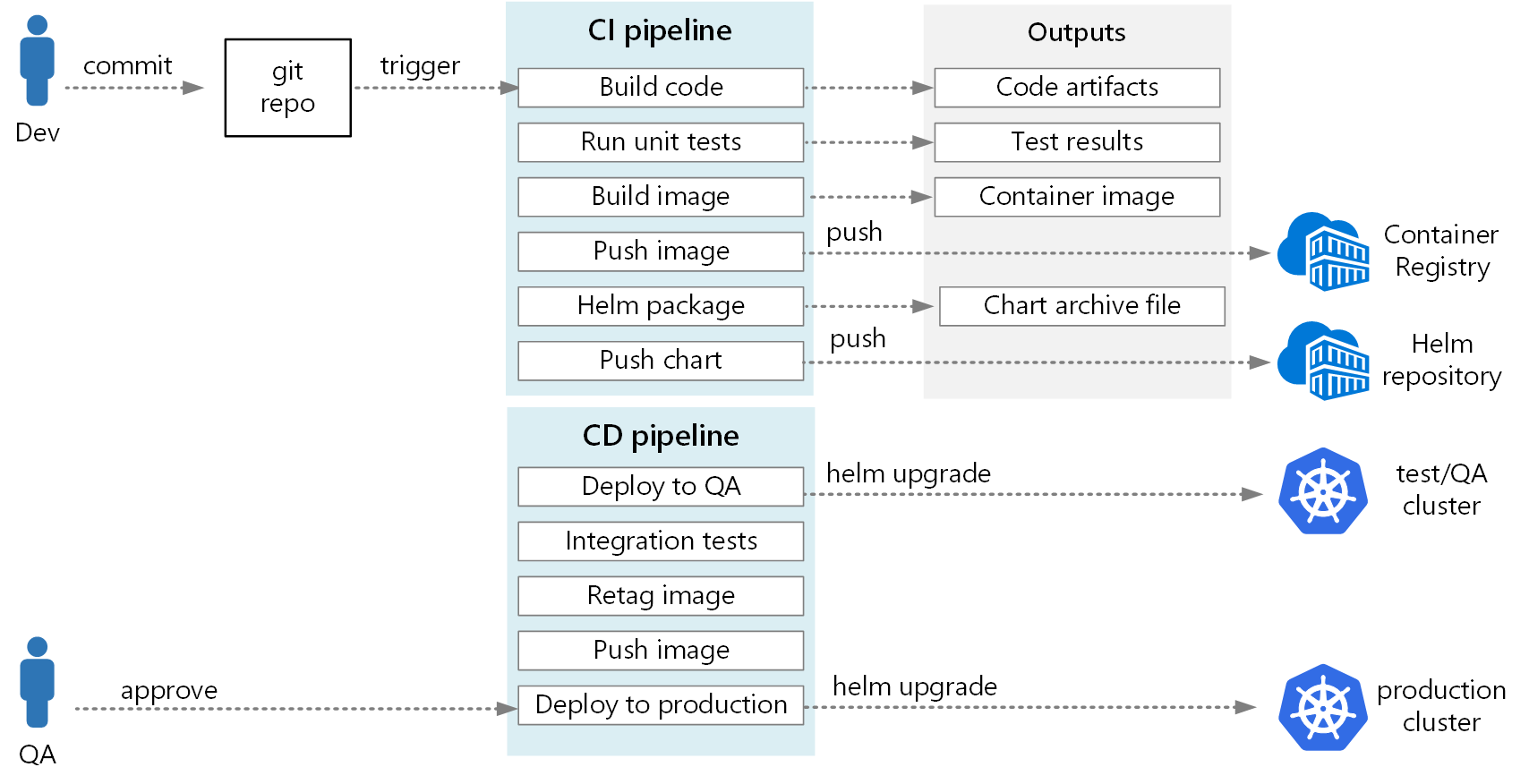