Consolidate multiple tasks or operations into a single computational unit. This can increase compute resource utilization, and reduce the costs and management overhead associated with performing compute processing in cloud-hosted applications.

A cloud application often implements a variety of operations. In some solutions it makes sense to follow the design principle of separation of concerns initially, and divide these operations into separate computational units that are hosted and deployed individually (for example, as separate App Service web apps or separate Virtual Machines). However, although this strategy can help simplify the logical design of the solution, deploying a large number of computational units as part of the same application can increase runtime hosting costs and make management of the system more complex. 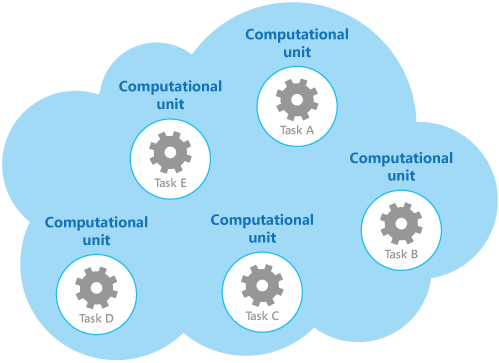 Each computational unit consumes chargeable resources, even when it's idle or lightly used. Therefore, this isn't always the most cost-effective solution.

In Azure, this concern applies to App Services, Container Apps, and Virtual Machines. These items run in their own environment. Running a collection of separate websites, microservices, or virtual machines that are designed to perform a set of well-defined operations, but that need to communicate and cooperate as part of a single solution, can be an inefficient use of resources.

Tasks can be grouped according to criteria based on the features provided by the environment and the costs associated with these features. A common approach is to look for tasks that have a similar profile concerning their scalability, lifetime, and processing requirements. Grouping these together allows them to scale as a unit. The elasticity provided by many cloud environments enables additional instances of a computational unit to be started and stopped according to the workload. For example, Azure provides autoscaling that you can apply to App Services and Virtual Machine Scale Sets. For more information, see Autoscaling Guidance.

As a counter example to show how scalability can be used to determine which operations shouldn't be grouped together, consider the following two tasks:

The second task requires elasticity that can involve starting and stopping a large number of instances of the computational unit. Applying the same scaling to the first task would simply result in more tasks listening for infrequent messages on the same queue, and is a waste of resources.

In many cloud environments it's possible to specify the resources available to a computational unit in terms of the number of CPU cores, memory, disk space, and so on. Generally, the more resources specified, the greater the cost. To save money, it's important to maximize the work an expensive computational unit performs, and not let it become inactive for an extended period.

If there are tasks that require a great deal of CPU power in short bursts, consider consolidating these into a single computational unit that provides the necessary power. However, it's important to balance this need to keep expensive resources busy against the contention that could occur if they are over stressed. Long-running, compute-intensive tasks shouldn't share the same computational unit, for example.

Consider the following points when implementing this pattern:

Lifetime. The cloud infrastructure periodically recycles the virtual environment that hosts a computational unit. When there are many long-running tasks inside a computational unit, it might be necessary to configure the unit to prevent it from being recycled until these tasks have finished. Alternatively, design the tasks by using a check-pointing approach that enables them to stop cleanly, and continue at the point they were interrupted when the computational unit is restarted.

Release cadence. If the implementation or configuration of a task changes frequently, it might be necessary to stop the computational unit hosting the updated code, reconfigure and redeploy the unit, and then restart it. This process will also require that all other tasks within the same computational unit are stopped, redeployed, and restarted.

Security. Tasks in the same computational unit might share the same security context and be able to access the same resources. There must be a high degree of trust between the tasks, and confidence that one task isn't going to corrupt or adversely affect another. Additionally, increasing the number of tasks running in a computational unit increases the attack surface of the unit. Each task is only as secure as the one with the most vulnerabilities.

Consider consolidating compute resources only for a system that's been in production for a period of time so that operators and developers can monitor the system and create a heat map that identifies how each task uses differing resources. This map can be used to determine which tasks are good candidates for sharing compute resources.

Complexity. Combining multiple tasks into a single computational unit adds complexity to the code in the unit, possibly making it more difficult to test, debug, and maintain.

Stable logical architecture. Design and implement the code in each task so that it shouldn't need to change, even if the physical environment the task runs in does change.

Other strategies. Consolidating compute resources is only one way to help reduce costs associated with running multiple tasks concurrently. It requires careful planning and monitoring to ensure that it remains an effective approach. Other strategies might be more appropriate, depending on the nature of the work and where the users these tasks are running are located. For example, functional decomposition of the workload (as described by the Compute Partitioning Guidance) might be a better option.

Use this pattern for tasks that are not cost effective if they run in their own computational units. If a task spends much of its time idle, running this task in a dedicated unit can be expensive.

This pattern might not be suitable for tasks that perform critical fault-tolerant operations, or tasks that process highly sensitive or private data and require their own security context. These tasks should run in their own isolated environment, in a separate computational unit.

This pattern can be achieved in different ways, depending on the compute service you use. See the following example services: