This reference architecture provides strategies for the partitioning model that event ingestion services use. Because event ingestion services provide solutions for high-scale event streaming, they need to process events in parallel and be able to maintain event order. They also need to balance loads and offer scalability. Partitioning models meet all of these requirements. 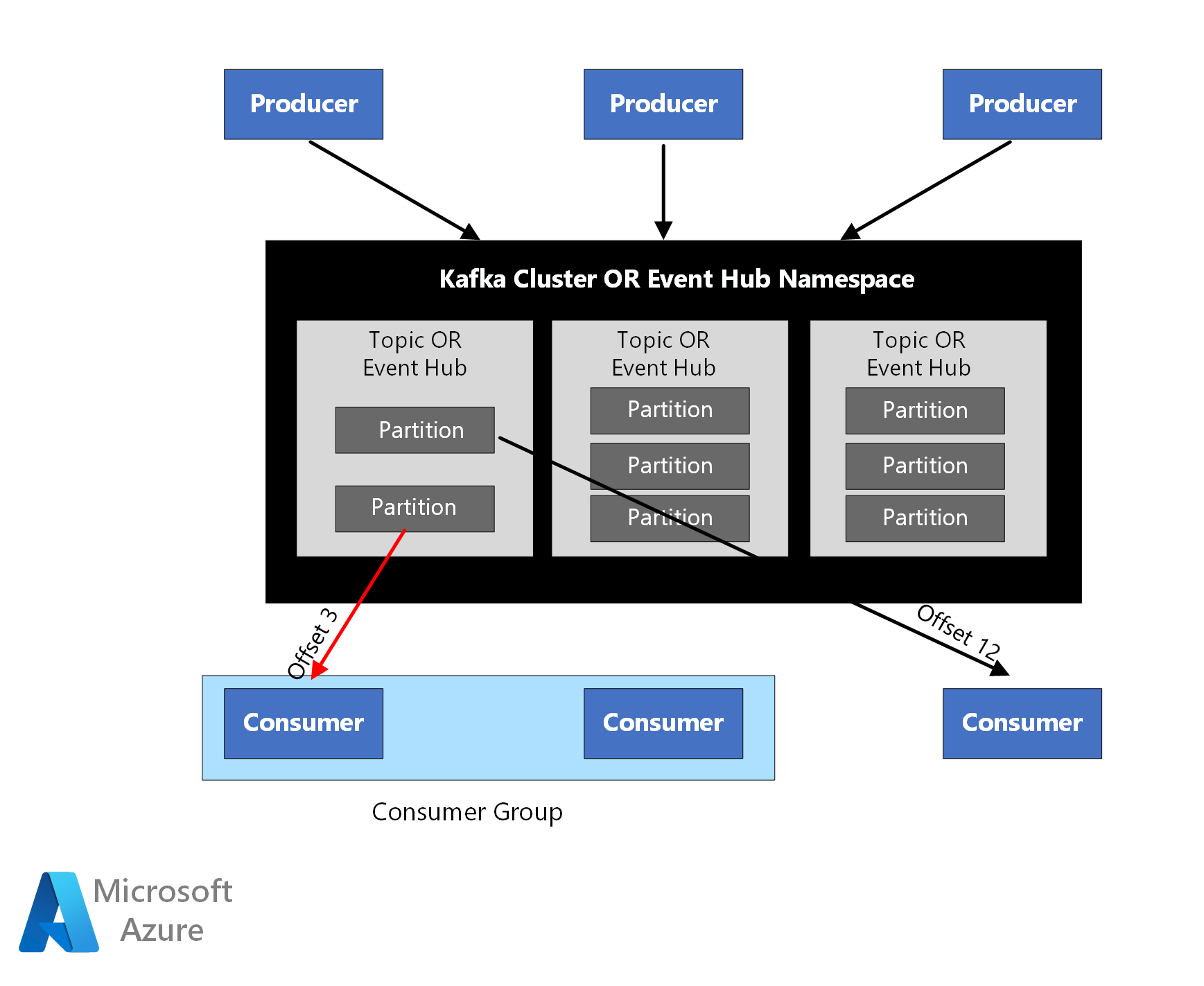 Many event ingestion technologies exist, including:

Besides offering partitioning strategies, this document also points out differences between partitioning in Event Hubs and Kafka.

Keep the following recommendations in mind when developing a partitioning strategy.

Each event stores its content in its value. Besides the value, each event also contains a key, as the following diagram shows:

The key contains data about the event and can also play a role in the assignment policy.

Keep these recommendations in mind when choosing an assignment policy:

Determine the number of partitions

Use these guidelines to decide how many partitions to use:

Besides these guidelines, you can also use this rough formula to determine the number of partitions:

It uses the following values:

For example, consider this situation:

With these values, the number of partitions is 4:

When measuring throughput, keep these points in mind:

Assign partitions to consumers when rebalancing

When consumers subscribe or unsubscribe, the pipeline rebalances the assignment of partitions to consumers. By default, Event Hubs and Kafka use a round robin approach for rebalancing. This method distributes partitions evenly across members.

With Kafka, if you don't want the pipeline to automatically rebalance assignments, you can statically assign partitions to consumers. But you need to make sure that all partitions have subscribers and that the loads are balanced.

Besides the default round robin strategy, Kafka offers two other strategies for automatic rebalancing:

Keep these points in mind when using a partitioning model.

Using a large number of partitions can limit scalability:

A significant number of partitions can also adversely affect availability:

In Kafka, events are committed after the pipeline has replicated them across all in-sync replicas. This approach ensures a high availability of events. Since consumers only receive committed events, the replication process adds to the latency. In ingestion pipelines, this term refers to the time between when a producer publishes an event and a consumer reads it. According to experiments that Confluent ran, replicating 1,000 partitions from one broker to another can take about 20 milliseconds. The end-to-end latency is then at least 20 milliseconds. When the number of partitions increases further, the latency also grows. This drawback doesn't apply to Event Hubs.

In Event Hubs, publishers use a Shared Access Signature (SAS) token to identify themselves. Consumers connect via an AMQP 1.0 session. This state-aware bidirectional communication channel provides a secure way to transfer messages. Kafka also offers encryption, authorization, and authentication features, but you have to implement them yourself.

The following code examples demonstrate how to maintain throughput, distribute to a specific partition, and preserve event order.

This example involves log aggregation. The goal isn't to process events in order, but rather, to maintain a specific throughput.

A Kafka client implements the producer and consumer methods. Since order isn't important, the code doesn't send messages to specific partitions. Instead, it uses the default partitioning assignment: 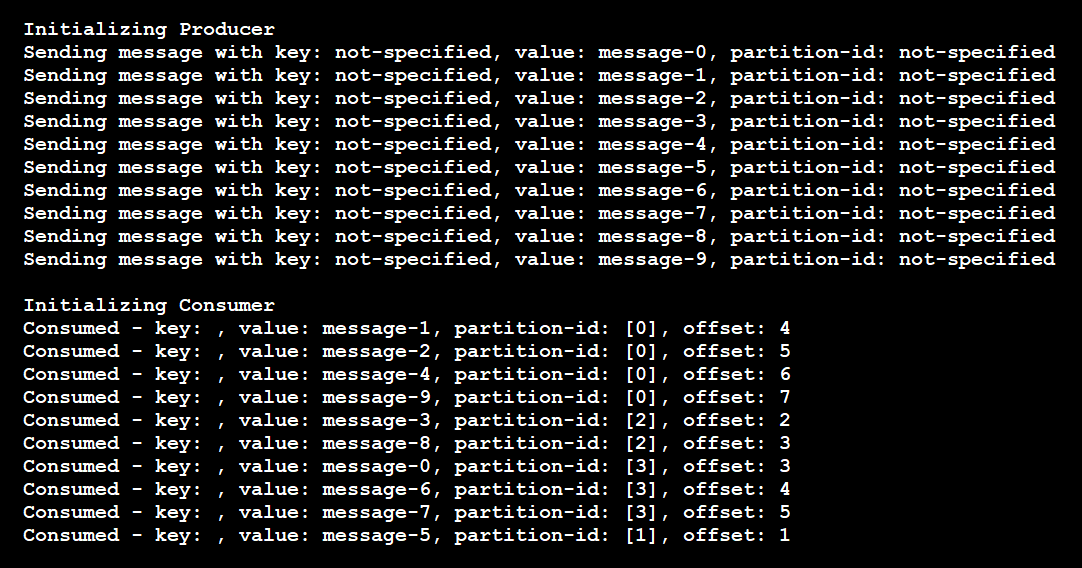 In this case, the topic has four partitions. The following events took place:

If the code had used two instances of the consumer, each instance would have subscribed to two of the four partitions.

Distribute to a specific partition

As these results show, the producer sent all messages to partition 2, and the consumer only read messages from partition 2: 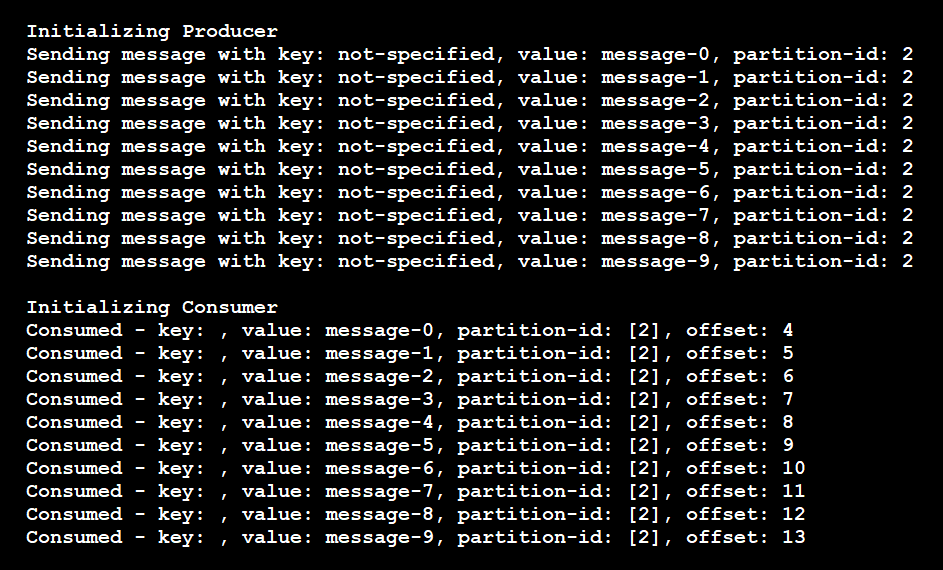 This example involves bank transactions that a consumer needs to process in order. In this scenario, you can use the customer ID of each event as the key. For the event value, use the details of the transaction. The following code shows a simplified implementation of this case:

This code produces the following results: 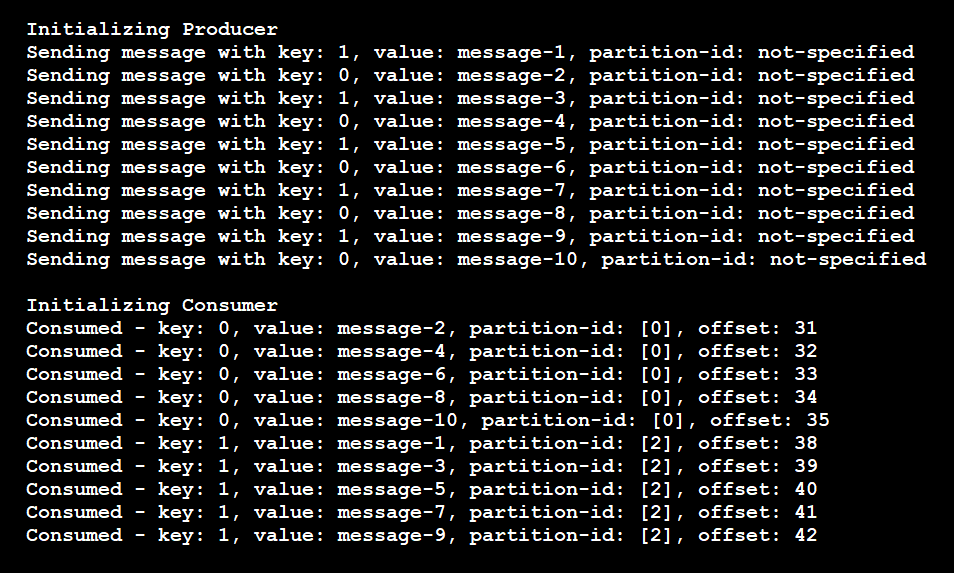 As these results show, the producer only used two unique keys. The messages then went to only two partitions instead of all four. The pipeline guarantees that messages with the same key go to the same partition.