Serverless models abstract code from the underlying compute infrastructure, allowing developers to focus on business logic without extensive setup. Serverless code reduces costs, because you pay only for the code execution resources and duration.

The serverless event-driven model fits situations where a certain event triggers a defined action. For example, receiving an incoming device message triggers storage for later use, or a database update triggers some further processing.

To help you explore Azure serverless technologies in Azure, Microsoft developed and tested a serverless application that uses Azure Functions. This article walks through the code for the serverless Functions solution, and describes design decisions, implementation details, and some of the "gotchas" you might encounter.

The two-part solution describes a hypothetical drone delivery system. Drones send in-flight status to the cloud, which stores these messages for later use. A web app lets users retrieve the messages to get the latest status of the devices.

You can download the code for this solution from GitHub.

This walkthrough assumes basic familiarity with the following technologies:

You don't need to be an expert in Functions or Event Hubs, but you should understand their features at a high level. Here are some good resources to get started:

Fabrikam manages a fleet of drones for a drone delivery service. The application consists of two main functional areas:

Here's a screenshot of the web app, showing the result of a query: 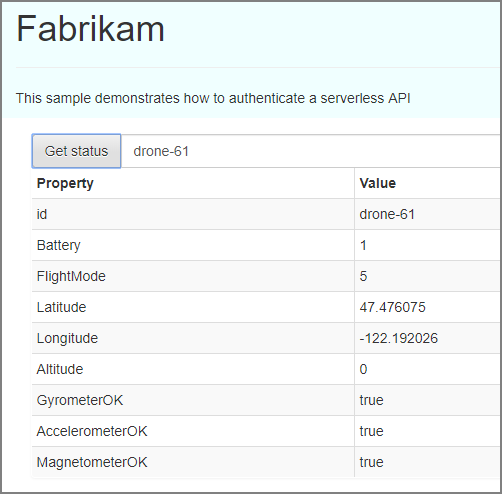 Why choose a serverless approach?

A serverless architecture with Functions is an example of an event-driven architecture. The function code is a triggered by some event that's external to the function — in this case, either a message from a drone, or an HTTP request from a client application. With a function app, you don't need to write any code for the trigger. You only write the code that runs in response to the trigger. That means you can focus on your business logic, rather than writing a lot of code to handle infrastructure concerns like messaging.

There are also some operational advantages to using a serverless architecture:

The following diagram shows the high-level architecture of the application: 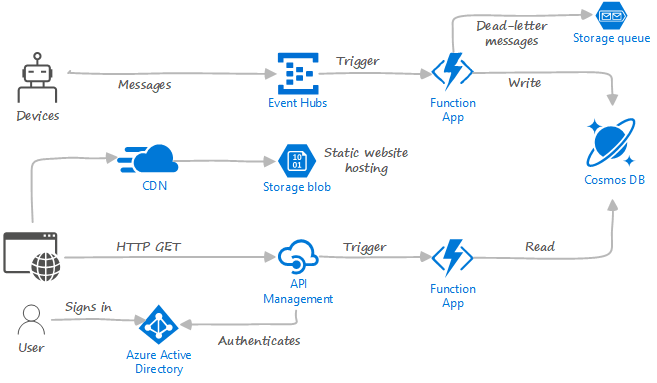 This application is based on two reference architectures, corresponding to the two functional blocks described above:

You can read those articles to learn more about the high-level architecture, the Azure services that are used in the solution, and considerations for scalability, security, and reliability.

Let's start by looking at the function that processes drone messages from Event Hubs. The function is defined in a class named RawTelemetryFunction:

This class has several dependencies, which are injected into the constructor using dependency injection:

Later, we'll look at how to configure the dependency injection. For now, just assume these dependencies exist.

The logic in the function is implemented as an asynchronous method named RunAsync. Here is the method signature:

The method takes the following parameters:

The EventHubTrigger attribute on the messages parameter configures the trigger. The properties of the attribute specify an event hub name, a connection string, and a consumer group. (A consumer group is an isolated view of the Event Hubs event stream. This abstraction allows for multiple consumers of the same event hub.)

Notice the percent signs (%) in some of the attribute properties. These indicate that the property specifies the name of an app setting, and the actual value is taken from that app setting at run time. Otherwise, without percent signs, the property gives the literal value.

The Connection property is an exception. This property always specifies an app setting name, never a literal value, so the percent sign is not needed. The reason for this distinction is that a connection string is secret and should never be checked into source code.

While the other two properties (event hub name and consumer group) are not sensitive data like a connection string, it's still better to put them into app settings, rather than hard coding. That way, they can be updated without recompiling the app.

Here's the implementation of the RawTelemetryFunction.RunAsync method that processes a batch of messages:

When the function is invoked, the messages parameter contains an array of messages from the event hub. Processing messages in batches will generally yield better performance than reading one message at a time. However, you have to make sure the function is resilient and handles failures and exceptions gracefully. Otherwise, if the function throws an unhandled exception in the middle of a batch, you might lose the remaining messages. This consideration is discussed in more detail in the section Error handling.

But if you ignore the exception handling, the processing logic for each message is simple:

Let's look at these two methods in more detail, starting with the Deserialize method.

The TelemetryProcess.Deserialize method takes a byte array that contains the message payload. It deserializes this payload and returns a DeviceState object, which represents the state of a drone. The state may represent a partial update, containing just the delta from the last-known state. Therefore, the method needs to handle null fields in the deserialized payload.

This method uses another helper interface, ITelemetrySerializer<T>, to deserialize the raw message. The results are then transformed into a POCO model that is easier to work with. This design helps to isolate the processing logic from the serialization implementation details. The ITelemetrySerializer<T> interface is defined in a shared library, which is also used by the device simulator to generate simulated device events and send them to Event Hubs.

The StateChangeProcessor.UpdateState method applies the state changes. The last-known state for each drone is stored as a JSON document in Cosmos DB. Because the drones send partial updates, the application can't simply overwrite the document when it gets an update. Instead, it needs to fetch the previous state, merge the fields, and then perform an upsert operation.

This code uses the IDocumentClient interface to fetch a document from Cosmos DB. If the document exists, the new state values are merged into the existing document. Otherwise, a new document is created. Both cases are handled by the UpsertDocumentAsync method.

This code is optimized for the case where the document already exists and can be merged. On the first telemetry message from a given drone, the ReadDocumentAsync method will throw an exception, because there is no document for that drone. After the first message, the document will be available.

Azure Functions supports an output binding for Cosmos DB. This binding lets the function app write documents in Cosmos DB without any code. However, the output binding won't work for this particular scenario, because of the custom upsert logic that's needed.

As mentioned earlier, the RawTelemetryFunction function app processes a batch of messages in a loop. That means the function needs to handle any exceptions gracefully and continue processing the rest of the batch. Otherwise, messages might get dropped.

If an exception is encountered when processing a message, the function puts the message onto a dead-letter queue:

The dead-letter queue is defined using an output binding to a storage queue:

Deployment tip: In the Resource Manager template that creates the storage account, you can automatically populate an app setting with the connection string. The trick is to use the listKeys function.

Here is the section of the template that creates the storage account for the queue:

Here is the section of the template that creates the function app.

This defines an app setting named DeadLetterStorage whose value is populated using the listKeys function. It's important to make the function app resource depend on the storage account resource (see the dependsOn element). This guarantees that the storage account is created first and the connection string is available.

The following code sets up dependency injection for the RawTelemetryFunction function:

Azure Functions written for .NET can use the ASP.NET Core dependency injection framework. The basic idea is that you declare a startup method for your assembly. The method takes an IFunctionsHostBuilder interface, which is used to declare the dependencies for DI. You do this by calling Add* method on the Services object. When you add a dependency, you specify its lifetime:

In this example, the TelemetryProcessor and StateChangeProcessor objects are declared as transient. This is appropriate for lightweight, stateless services. The DocumentClient class, on the other hand, should be a singleton for best performance. For more information, see Performance tips for Azure Cosmos DB and .NET.

If you refer back to the code for the RawTelemetryFunction, you'll see there another dependency that doesn't appear in DI setup code, namely the TelemetryClient class that is used to log application metrics. The Functions runtime automatically registers this class into the DI container, so you don't need to register it explicitly.

For more information about DI in Azure Functions, see the following articles:

Sometimes an object must be initialized with some configuration values. Generally, these settings should come from app settings or (in the case of secrets) from Azure Key Vault.

There are two examples in this application. First, the DocumentClient class takes a Cosmos DB service endpoint and key. For this object, the application registers a lambda that will be invoked by the DI container. This lambda uses the IConfiguration interface to read the configuration values:

The second example is the StateChangeProcessor class. For this object, we use an approach called the options pattern. Here's how it works:

The DI system will automatically populate the options class with configuration values and pass this to the constructor.

There are several advantages of this approach:

The other Functions app in this solution implements a simple REST API to get the last-known status of a drone. This function is defined in a class named GetStatusFunction. Here is the complete code for the function:

This function uses an HTTP trigger to process an HTTP GET request. The function uses a Cosmos DB input binding to fetch the requested document. One consideration is that this binding will run before the authorization logic is performed inside the function. If an unauthorized user requests a document, the function binding will still fetch the document. Then the authorization code will return a 401, so the user won't see the document. Whether this behavior is acceptable may depend on your requirements. For example, this approach might make it harder to audit data access for sensitive data.

The web app uses Azure AD to authenticate users. Because the app is a single-page application (SPA) running in the browser, the implicit grant flow is appropriate:

A Function application can be configured to authenticate users with zero code. For more information, see Authentication and authorization in Azure App Service.

Authorization, on the other hand, generally requires some business logic. Azure AD supports claims based authentication. In this model, a user's identity is represented as a set of claims that come from the identity provider. A claim can be any piece of information about the user, such as their name or email address.

The access token contains a subset of user claims. Among these are any application roles that the user is assigned to.

The principal parameter of the function is a ClaimsPrincipal object that contains the claims from the access token. Each claim is a key/value pair of claim type and claim value. The application uses these to authorize the request.

The following extension method tests whether a ClaimsPrincipal object contains a set of roles. It returns false if any of the specified roles is missing. If this method returns false, the function returns HTTP 401 (Unauthorized).

For more information about authentication and authorization in this application, see the Security considerations section of the reference architecture.

Once you get a feel for how this reference solution works, learn best practices and recommendations for similar solutions.

Azure Functions is just one Azure compute option. For help with choosing a compute technology, see Choose an Azure compute service for your application.