Affinity Cookies sound delicious, maybe turkey bacon with chocolate or something.  But no, Affinity Cookies are used to aid people who need to stay with a certain instance of web app or web site in Azure.  The reason for this is that we strive for statelessness, but do not always achieve it.  This means that the user must stay on the particular instance that they using till they break state and then things are saved at that time.  Example might be your design for the next big deal, but because there was a hiccup on your phone as the train speeded through a tunnel.  What are you going to do?

So in this case what is used? Application Request Routing IIS Extension, which I just basically wrote down, but is something I definitely need to explore more over the next few days.

Let’s take a case: You have a Raspberry Pi that you want to use to connect a number of Arduino Sensors inexpensively to the cloud, so you don’t want the Arduino’s, which are excellent at the point of a sensor, but not as good for connecting to expensive services like AWS or Google.  To keep costs down on any system, the Raspberry Pi or similar make good relays.  The Arduino’s feed into the Raspberry Pi, then the Raspberry Pi feeds the sensor data non-realtime at the optimized least cost times.

So what is the process for the Raspberry Pi to connect with Azure Web Apps or Web Sites? If you thought this was a good idea, how would it work?  Scroll down to see more… 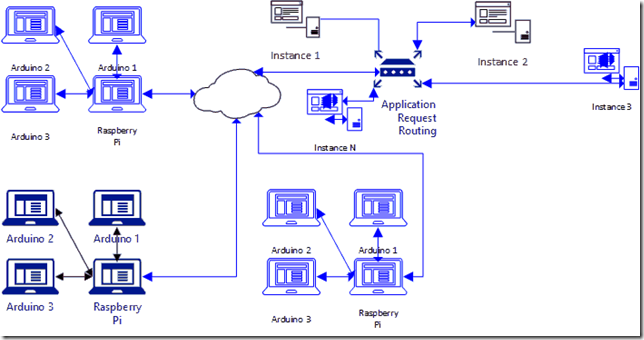 This could totally be a state machine, but if we did this procedurally, then it might be written as:

It is likely you will want to experiment with this, you will need to think about the test.  It is always clearer if you have a bunch of different devices use this for your testing.