The chart below explains the details of the 14 people on this trip; i.e.: who is from which team in what division and with whom they are travelling:

After flying over to Canberra on the Thursday afternoon, we picked up the hire cars (2 GM Holden Commodores) and headed over to the Canberra Motor Village.  We had hired two of the 2 Bedroom Villas and a Motel Room. It was about midnight by the time we got settled and off to sleep.  The next morning we slowly surfaced and had a look around. 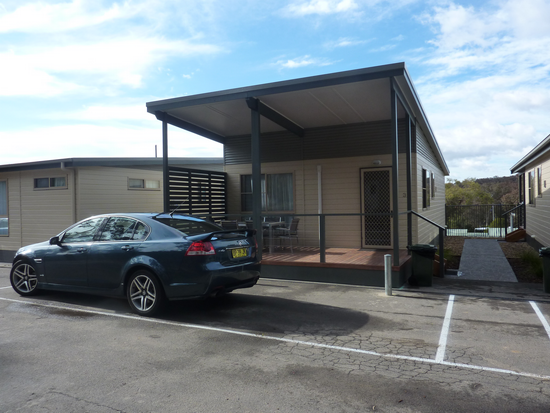 The Canberra Motor Village is located in middle of a national park and just on the other side of the road past the front of our villa is natural bushland. We spent some time watching the locals hopping around.

We even had a very tame and friendly young Magpie who would visit around breakfast and dinner time to see what we would give him to eat. He would take food from your hand if you offered it. 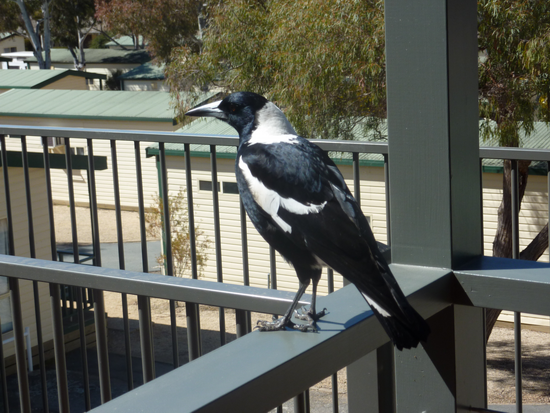 The boys spent most of Friday morning working on their rescue robots and dance performances. In the afternoon we visited the Australian National Univesity where the RoboCup National competition was being held. This gave the boys a chance to check out the surfaces and lighting conditions for the competition. They spent some time practicing and testing before we headed back to the motor village. The Musgrave family then went out for an Indian dinner with some friends who live very close to Canberra, while the others had a pizza dinner at the motor village's cafe.

On Saturday, the rescue teams stayed home while the dance teams went back to the university to complete the registration process and then do some final testing before the competition. On the way home from we visited the Black Mountain Tower which is a 195.2m tall telecommunications tower and revolving restaurant with fantastic views across all of Canberra. 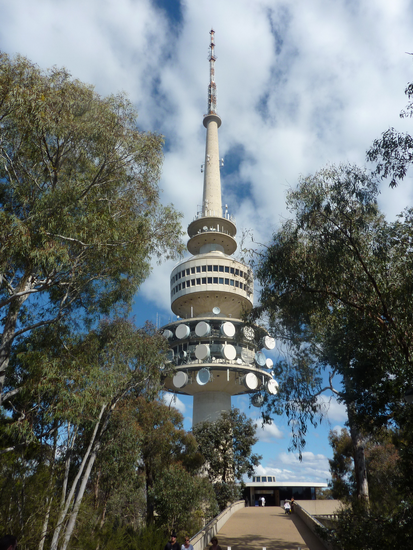 We then returned home and had pre-dinner drinks and nibbles (finger food). The result was that we ate so much snack food that most of us decided to skip dinner. Those who were still hungry went off and found dinner at another Indian restaurant.

Finally, Sunday and competition day was here. We headed back to the university early for a last chance to fine tune the robots. The Senior Dance teams had to perform twice as well as be interviewed, after the two performances the top three teams perform one more time to decide the final positions. The Rescue Premier teams had to compete in five rounds as well as be interviewed, after the five rounds the top eight teams will compete in a knockout finals series.

Team Jimmy (Aaron and Hayden) performed well in Rounds 2, 3 and 4 with maximum points (even if round 2 finished in 1:58, 2 seconds before the time limit). Rounds 1 and 5 were not so good. Team Them (C-J and Nicholas) did not do so well, but learnt a lot for the next time they compete. At the end of the five rounds Team Jimmy was in position 4 and Them was in position 25 out of 29. Below are Jimmy's third and fourth rounds:

With Team Jimmy finishing in 4th position, Aaron and Hayden progressed to the finals, but sadly were knocked out in the Quarter Finals to finish 7th overall. Check out all the shapes and sizes of robots from the 8 finalists. 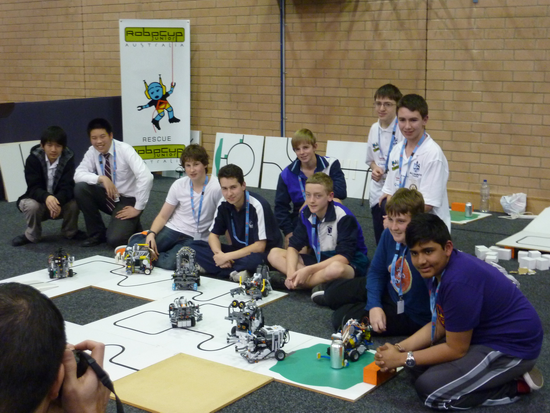 Below is a picture of the track for round 5, this gives you an idea of how hard the courses get, especially when you still have a 2 minute time limit. Note the see-saw and raised sections added to this year's competition. 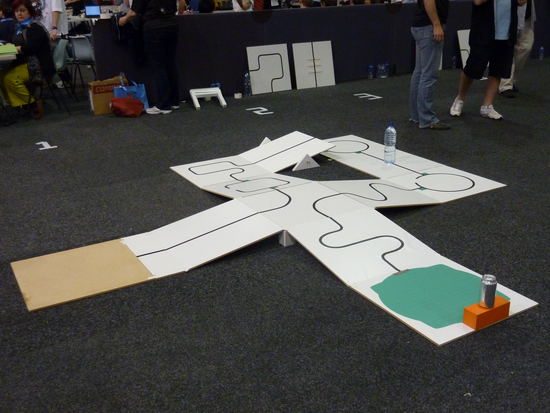 RoboCup Junior Australia is working on aligning its standards with the international competition and so next year the courses get harder with raised sections and "tunnels". They had an example course set up, see below: 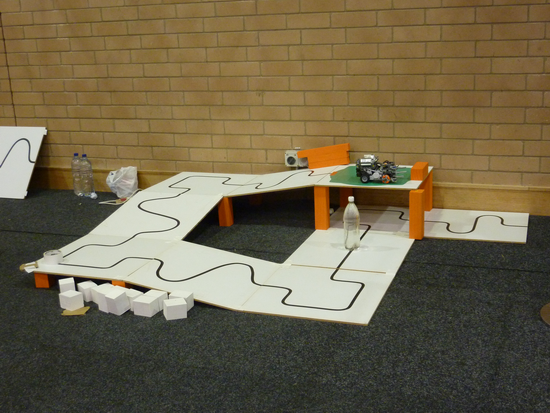 Well done to Aaron and Hayden for reaching the national finals and improving on their result from last year.

Both 8 Bit J.A.R (Rohan and Julian) and Boogie Man (Vinura) performed well in their two preliminary performances and both teams reached the finals with one other team. Once in the finals they had to perform one more time.

Here is the finals performance of 8 Bit Thriller. Note the improved set with lights compared to the state competition... many hours of work went into creating the set, the robots, the costumes for the robots and the programming of the robots.

8 Bit J.A.R. went on to be awarded second place with Boogie Man coming in third. Well done boys. Here are the winning teams. 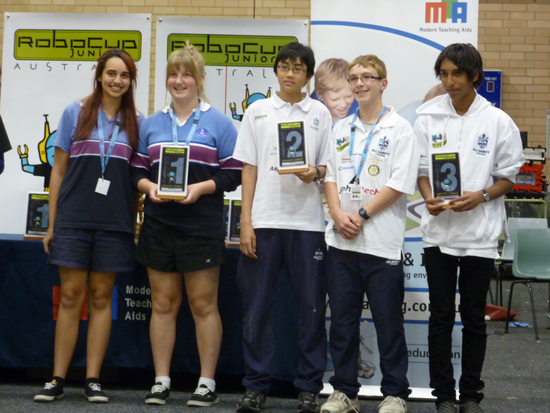 As the competition finished for the day, I had the chance to get all the All Saints Teams together for a quick photo. 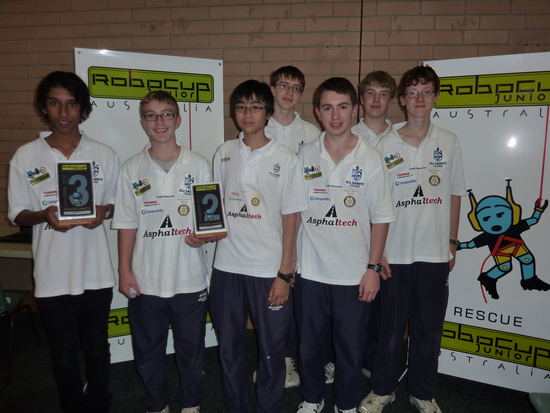 I have one more picture I wanted to show. There was a Dance Theatre team called the Dragon Girls who had a dragon robot chasing another robot around a track. As I collect dragons, I had to take a picture of this amazing robot. 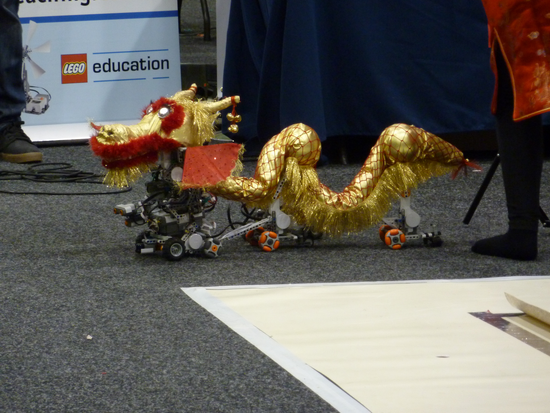 After dropping all our gear back to our villas and spending a little time to relax we went for a lovely team dinner at  El Dorado Steakhouse before retiring for the night.

On Monday we had to pack up and check out, we then went to Questacon, which is Australia's Nation Science and Technology Centre. Lots of great educational and scientific exhibits to play with and experience first hand.

To finish the day, we went on a Segway ride for an hour around Canberra with Seg Glide Ride. Here we are on the grass in front of the Old Parliament House with the flag of the New Parliament House showing in the background. 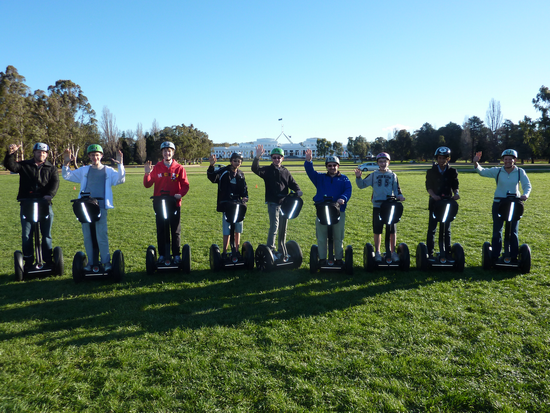 Then it was time to say good bye to Canberra and drive back to the airport for our flight home. An excellent trip for all involved.

For the previous posts on the RoboCup robotics competition see:

I just wish I had Mindstorms Lego when I was a child. I might just have to get myself a set now....