<Back to: The difference between MVVM and other Separated presentation patterns>

<Next: Adapting a simple vs complex model>

So what is a ViewModel? And how does it differ from a View or the Model. Consider the following example. Suppose you would build Paint using WPF or Silverlight, using the MVVM pattern: 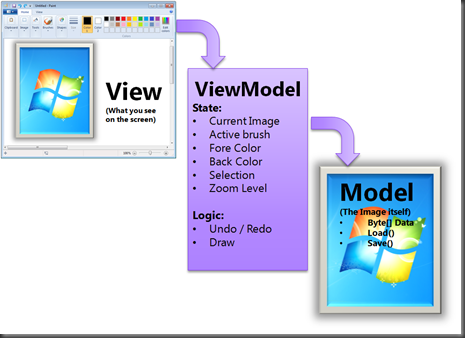 The View obviously determines what is displayed on the Screen. And the Model, well that will likely be the Image. But the application works with more data than ‘just’ the Document. This extra data is mostly the State of the UI. What brush is currently selected? What is the ‘zoom’ percentage? While it is possible to store this information in the View itself, this is usually a bad practice. For example, the zoom slider bar could be the place where you would store the zoom percentage. However, when more elements on the screen need to use the Zoom percentage, this value quickly becomes very hard to manage.

Model for the View

The ViewModel is a model for the view. Therefore, it hold’s all the state of the view as well as the logic that operates on the state. The ViewModel exposes this data and logic in such a way that the View can very easily access it. However, the ViewModel should not expose or interact directly with UI elements.

Another responsibility of the ViewModel is to adapt the Model to the View. Typically the Model is a domain model (we’ll dive into that more in a later blog post). If you have full control over the model, then typically you can build it so that the model itself is very easily databindable. However, if you don’t have control over the model, for example, you are getting it from an external system, then the ViewModel might need to adapt the model to the view. For example, by adding aggregations, combining information from different models or simply by implementing INotifyPropertyChanged to enable the ViewModel notifying the View that properties have changed.

So the following picture shows the MVVM pattern as how you would typically implement it in WPF or Silverlight: 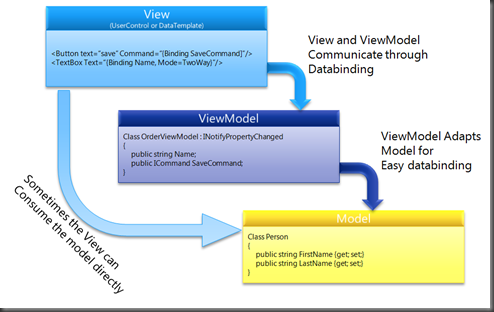 The View is typically implemented as a UserControl or DataTemplate (in WPF). It uses Databinding to read and update information on the ViewModel. For example, the ViewModel can expose a public property Name that can be bound to a textbox.

If the view needs to communicate to the ViewModel, there are several options:

To route the Click event from a button to a ViewModel, the easiest way is to implement a Command. The Command pattern describes an object that can invoke functionality at a later point in time. In this case, when the user clicks a button. We’ll dive into commands later in this post.

This defines the Commands in XAML:

Pretty much only buttons allow you to use Commands out of the box. Now it’s possible (and not too hard) to create your own commands using attached behaviors).

Here’s the property in C#:

You can see that it also supports the INotifyPropertyChanged event. This means that the View will be notified if this value is changed in the ViewModel. And this is what the XAML would look like:

When I first started using the ViewModel pattern, I overlooked this capability. For example, I was looking for a way to attach functionality to the SelectedItemChanged event of the DataGrid. But two way databinding works a lot more directly. Just don’t forget to add the “Mode=TwoWay” tag ;)

The Caliburn framework allows you to bind public methods on the ViewModel directly to your controls in XAML. While this is a really cool technology, I also believe it makes your XAML more complex, because effectively, you are now programming (calling methods) in XAML. So I would personally try to either use commands, use two way databinding or implement an attached behavior (more on this subject later).

It is always possible to use Code Behind to communicate between the View and the ViewModel. Whether this is a good idea is a topic of hot debate. I personally am of the opinion that there are better ways to solve this problem than to use code behind. In a later blog post, I’ll go into details why i think this is a bad idea and how you can avoid this.  But there are people who think differently.

A common way to expose functionality from your ViewModel that your Views can interact with is by exposing Command objects. A command object implements the ICommand interface.

The ICommand interface has two methods:

The CanExecute is interesting. It’s a common scenario that you might wish to disable certain functionality, based on the state of your UI. This can easily be accomplished with a command. Because, when you bind a button to a command and CanExecute returns false, then the button will automatically become disabled.

Commands also have another advantage: They decouple the invocation from the actual logic. This allows for interesting scenario’s:

In my demo application, I’m also demonstrating the use of the DelegateCommand.

One thing that you’ll find yourself implementing on your ViewModels the time is the INotifyPropertyChanged interface. This interface allows your ViewModel to notify the View of changes to properties.

This code snippet shows how to implement this pattern:

One important thing: before invoking the event in the property, check if the value has actually changed. This helps preventing never ending loops when properties are chained together.

If you don’t like the repeating code you’ll get when implementing properties with INotifyPropertyChagned, you can also use ObservableObjects as properties, as I’m describing (among other things) in this blog post:

What not to do in a ViewModel

There are a couple of things you shouldn’t do in your ViewModels: