The final part (at least for now, I’m hoping a guest author will write part 11) of this series on generation 2 virtual machines in Hyper-V re-visits conversion of a generation 1 virtual machine to a generation 2 virtual machine. Part 8 walked through the manual process, assuming it is possible. However, there is an easier way with a PowerShell script I wrote and recently released. Called Convert-VMGeneration.ps1, it can be downloaded from https://code.msdn.microsoft.com/ConvertVMGeneration. The script is intended to make life as simple as possible, reducing as many as reasonably possible manual post-migration fix-ups that may be required.

Convert-VMGeneration.ps1 is self-documenting – after downloading to a local drive, running get-help .\Convert-VMGeneration.ps1 –full will give you everything you need to know on how to use. I will assume that you have read part 8 of this series before use so you understand the three phases of conversion – capture, apply and clone.

A few tips worth mentioning: 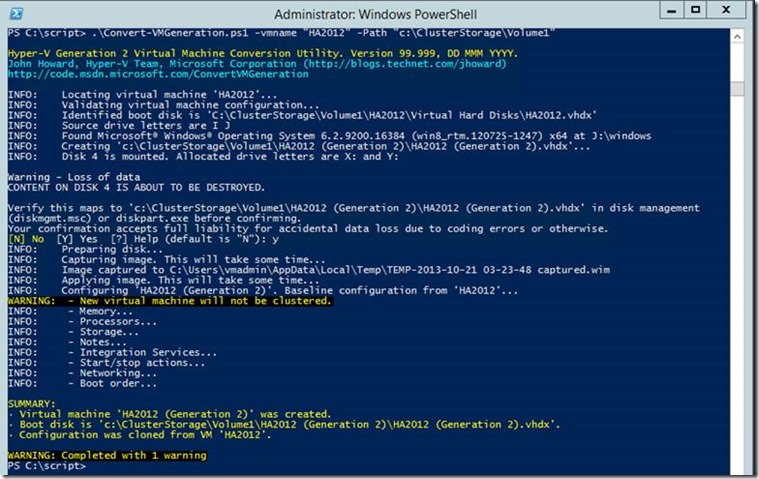 Here’s an example where there are some (potential) issues to resolve. One is that there is an additional data partition on the boot disk for the source VM. Windows Recovery Environment was left enabled during the migration and will not operate correctly in the generation 2 virtual machine. Lastly, the original source boot disk was a differencing disk. Appropriate fix-ups may be required to mirror the configuration on the generation 2 virtual machine. 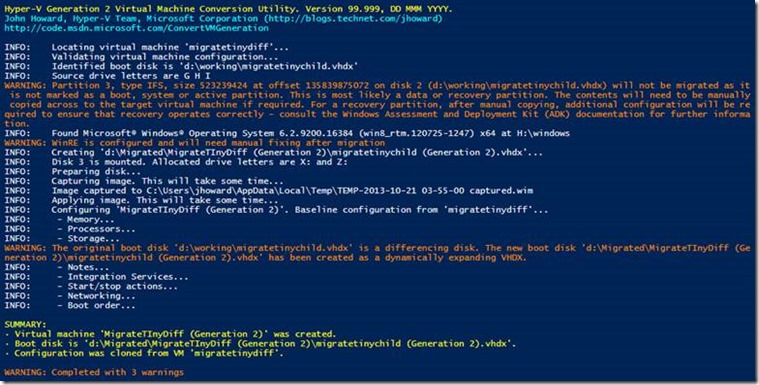 There are some VM configurations which aren’t handled, and the script will block the conversion:

I hope you find Convert-VMGeneration.ps1 useful. I’ll try to fix any bugs you report as time permits! A note for PowerShell aficionados reading the code – I make no apologies for my lack of PowerShell skills. This was the first time I’ve undertaken writing anything of reasonable complexity in PS. I’m sure there are many ways to make the code more powershellesque in efficiency.

So with that, I’ve reached the end of the planned parts of this series on generation 2 virtual machines in Hyper-V in Windows 8.1 and Windows Server 2012 R2. I hope you enjoyed them and found them and the conversion utility useful. As always, comments, questions and feedback are welcome.