When developing a governance model for your organization, it's important to remember that Azure Resource Manager is only one way to manage resources. Azure DevOps and continuous integration and continuous delivery (CI/CD) automation can be an unintentional security back-door if not properly secured. These resources should be protected by mirroring the role-based access control (RBAC) model used for Resource Manager.

This reference implementation and demo is open source and intended to be used as a teaching tool for organizations who are new to DevOps and need to create a governance model for deploying to Azure. Please read this scenario carefully to understand the decisions behind the model used in this sample repository.

Any governance model must be tied to the organization's business rules, which are reflected in any technical implementation of access controls. This example model uses a fictitious company with the following common scenario (with business requirements):

This simplified diagram shows how branches in a Git repository map to development, staging, and production environments: 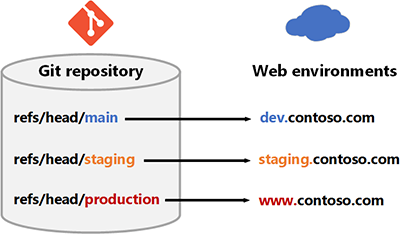 This diagram shows how linking from Resource Manager and CI/CD to Azure Active Directory (Azure AD) is the key to having an end-to-end governance model.

To make the concept easier to understand, the diagram only illustrates the "veggies" domain. The "fruits" domain would look similar and use the same naming conventions.

The numbering reflects the order in which IT administrators and enterprise architects think about and configure their cloud resources.

The concept of end-to-end governance is vendor agnostic. While this article focuses on Azure DevOps, Azure DevOps Server could be used as an on-premises substitute. Alternatively, you could also use a set of technologies for an open-source CI/CD development pipeline using options like Jenkins and GitLab.

Both Azure Repos and GitHub are platforms that are built to use the open-source Git version control system. While their feature sets are somewhat different, both can be integrated into global governance models for CI/CD. GitLab is another Git-based platform that provides robust CI/CD capabilities.

This scenario uses Terraform as its infrastructure as code (IaC) tool. Alternatives include Jenkins, Ansible, and Chef.

To achieve end-to-end governance in Azure, it's important to understand the security and permissions profile of the path from developer's computer to production. The following diagram illustrates a baseline CI/CD workflow with Azure DevOps. The red lock icon

indicates security permissions that must be configured by the user. Not configuring or misconfiguring permissions will leave your workloads vulnerable.

To successfully secure your workloads, you must use a combination of security permission configurations and human checks in your workflow. It's important that any RBAC model must also extend to both pipelines and code. These often run with privileged identities and will destroy your workloads if instructed to do so. To prevent this from happening, you should configure branch policies on your repository to require human approval before accepting changes that trigger automation pipelines.

The following concepts and questions are important to consider when designing a governance model. Bear in mind the potential use cases of this example organization.

1. Safeguard your environments with branch policies

Because your source code defines and triggers deployments, your first line of defense is to secure your source code management (SCM) repository. In practice, this is achieved by using the Pull Request workflow in combination with branch policies, which define checks and requirements before code can be accepted.

When planning your end-to-end governance model, privileged users (veggies-admins) will be responsible for configuring branch protection. Common branch protection checks used to secure your deployments include:

What happens if a developer tries to push directly to production?

Remember that Git is a distributed SCM system. A developer can commit directly to their local production branch. But when Git is properly configured, such a push will be automatically rejected by the Git server. For example:

Note that the workflow in the example is vendor agnostic. The pull request and branch protection features are available from multiple SCM providers, including Azure Repos, GitHub, and GitLab.

Once the code has been accepted into a protected branch, the next layer of access controls will be applied by the build server (such as Azure Pipelines).

It's also important to model Azure RBAC distinctly from Azure DevOps RBAC. The purpose of the pipeline is to minimize direct access to Azure. Except for special cases like innovation, learning, and issue resolution, most interactions with Azure should be conducted through purpose-built and gated pipelines.

For Azure Pipeline service principals, consider using a custom role that prevents it from removing resource locks and performing other destructive actions out of scope for its purpose.

3. Create a custom role for the service principal used to access production

It's a common mistake to give CI/CD build agents Owner roles and permissions. Contributor permissions are not enough if your pipeline also needs to perform identity role assignments or other privileged operations like Key Vault policy management.

But a CI/CD Build Agent will delete your entire production environment if told to do so. To avoid irreversible destructive changes, we create a custom role that:

To do this, we create a custom role and remove the Microsoft.Authorization/*/Delete actions.

If that removes too many permissions for your purposes, refer to the full list in the official documentation for Azure resource provider operations and adjust your role definition as needed.

This scenario extends beyond Resource Manager. This is why we use Terraform, which allows us to also create principals in Azure AD and bootstrap Azure DevOps using a single infrastructure as code tool.

For source code and detailed instructions, visit the GitHub repository Governance on Azure Demo - from DevOps to ARM.