Communication between microservices must be efficient and robust. With lots of small services interacting to complete a single business activity, this can be a challenge. In this article, we look at the tradeoffs between asynchronous messaging versus synchronous APIs. Then we look at some of the challenges in designing resilient interservice communication.

Here are some of the main challenges arising from service-to-service communication. Service meshes, described later in this article, are designed to handle many of these challenges.

Resiliency. There may be dozens or even hundreds of instances of any given microservice. An instance can fail for any number of reasons. There can be a node-level failure, such as a hardware failure or a VM reboot. An instance might crash, or be overwhelmed with requests and unable to process any new requests. Any of these events can cause a network call to fail. There are two design patterns that can help make service-to-service network calls more resilient:

Load balancing. When service "A" calls service "B", the request must reach a running instance of service "B". In Kubernetes, the Service resource type provides a stable IP address for a group of pods. Network traffic to the service's IP address gets forwarded to a pod by means of iptable rules. By default, a random pod is chosen. A service mesh (see below) can provide more intelligent load balancing algorithms based on observed latency or other metrics.

Distributed tracing. A single transaction may span multiple services. That can make it hard to monitor the overall performance and health of the system. Even if every service generates logs and metrics, without some way to tie them together, they are of limited use. The article Logging and monitoring talks more about distributed tracing, but we mention it here as a challenge.

Service versioning. When a team deploys a new version of a service, they must avoid breaking any other services or external clients that depend on it. In addition, you might want to run multiple versions of a service side-by-side, and route requests to a particular version. See API Versioning for more discussion of this issue.

There are tradeoffs to each pattern. Request/response is a well-understood paradigm, so designing an API may feel more natural than designing a messaging system. However, asynchronous messaging has some advantages that can be useful in a microservices architecture:

However, there are also some challenges to using asynchronous messaging effectively.

This solution uses the Drone Delivery example. It's ideal for the aerospace and aircraft industries.

With these considerations in mind, the development team made the following design choices for the Drone Delivery application: 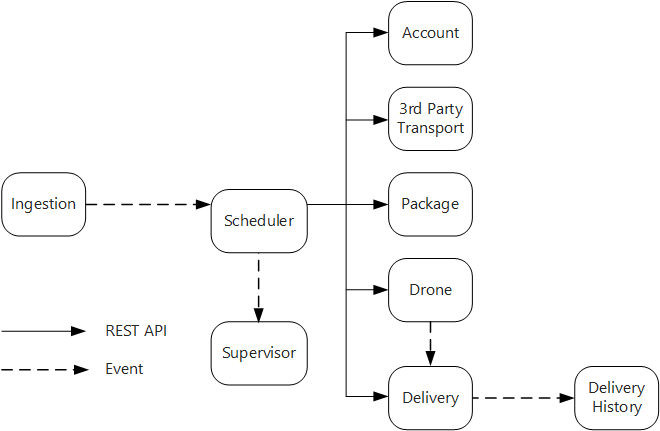 Notice that delivery status events are derived from drone location events. For example, when a drone reaches a delivery location and drops off a package, the Delivery service translates this into a DeliveryCompleted event. This is an example of thinking in terms of domain models. As described earlier, Drone Management belongs in a separate bounded context. The drone events convey the physical location of a drone. The delivery events, on the other hand, represent changes in the status of a delivery, which is a different business entity.

A service mesh is a software layer that handles service-to-service communication. Service meshes are designed to address many of the concerns listed in the previous section, and to move responsibility for these concerns away from the microservices themselves and into a shared layer. The service mesh acts as a proxy that intercepts network communication between microservices in the cluster. Currently, the service mesh concept applies mainly to container orchestrators, rather than serverless architectures.

Service mesh is an example of the Ambassador pattern — a helper service that sends network requests on behalf of the application.

Right now, the main options for a service mesh in Kubernetes are Linkerd and Istio. Both of these technologies are evolving rapidly. However, some features that both Linkerd and Istio have in common include:

A common challenge in microservices is correctly handling transactions that span multiple services. Often in this scenario, the success of a transaction is all or nothing — if one of the participating services fails, the entire transaction must fail.

There are two cases to consider:

After a nontransient failure, the current transaction might be in a partially failed state, where one or more steps already completed successfully. For example, if the Drone service already scheduled a drone, the drone must be canceled. In that case, the application needs to undo the steps that succeeded, by using a Compensating Transaction. In some cases, this must be done by an external system or even by a manual process.

If the logic for compensating transactions is complex, consider creating a separate service that is responsible for this process. In the Drone Delivery application, the Scheduler service puts failed operations onto a dedicated queue. A separate microservice, called the Supervisor, reads from this queue and calls a cancellation API on the services that need to compensate. This is a variation of the Scheduler Agent Supervisor pattern. The Supervisor service might take other actions as well, such as notify the user by text or email, or send an alert to an operations dashboard. 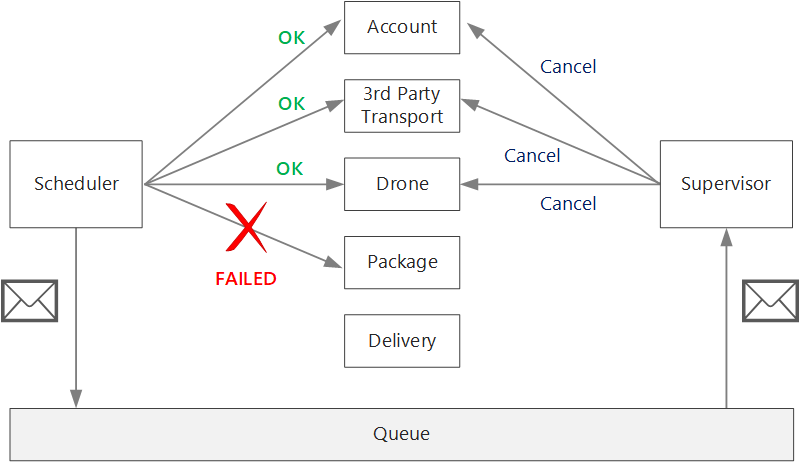 The Scheduler service itself might fail (for example, because a node crashes). In that case, a new instance can spin up and take over. However, any transactions that were already in progress must be resumed.

One approach is to save a checkpoint to a durable store after each step in the workflow is completed. If an instance of the Scheduler service crashes in the middle of a transaction, a new instance can use the checkpoint to resume where the previous instance left off. However, writing checkpoints can create a performance overhead.

Another option is to design all operations to be idempotent. An operation is idempotent if it can be called multiple times without producing additional side-effects after the first call. Essentially, the downstream service should ignore duplicate calls, which means the service must be able to detect duplicate calls. It's not always straightforward to implement idempotent methods. For more information, see Idempotent operations.

For microservices that talk directly to each other, it's important to create well-designed APIs.