An application is required to perform a variety of tasks of varying complexity on the information that it processes. A straightforward but inflexible approach to implementing an application is to perform this processing as a monolithic module. However, this approach is likely to reduce the opportunities for refactoring the code, optimizing it, or reusing it if parts of the same processing are required elsewhere within the application.

The figure illustrates the issues with processing data using the monolithic approach. An application receives and processes data from two sources. The data from each source is processed by a separate module that performs a series of tasks to transform this data, before passing the result to the business logic of the application. 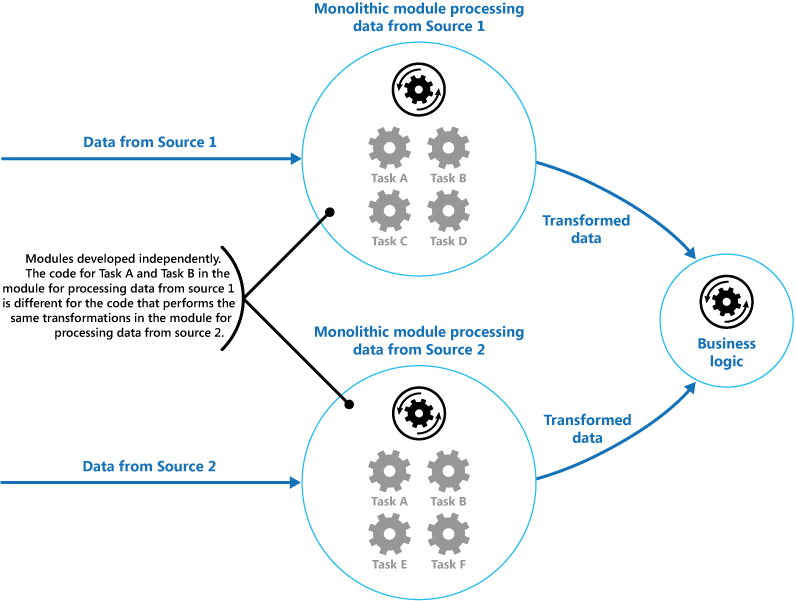 Some of the tasks that the monolithic modules perform are functionally very similar, but the modules have been designed separately. The code that implements the tasks is closely coupled in a module, and has been developed with little or no thought given to reuse or scalability.

However, the processing tasks performed by each module, or the deployment requirements for each task, could change as business requirements are updated. Some tasks might be compute intensive and could benefit from running on powerful hardware, while others might not require such expensive resources. Also, additional processing might be required in the future, or the order in which the tasks performed by the processing could change. A solution is required that addresses these issues, and increases the possibilities for code reuse.

Break down the processing required for each stream into a set of separate components (or filters), each performing a single task. By standardizing the format of the data that each component receives and sends, these filters can be combined together into a pipeline. This helps to avoid duplicating code, and makes it easy to remove, replace, or integrate additional components if the processing requirements change. The next figure shows a solution implemented using pipes and filters.

The time it takes to process a single request depends on the speed of the slowest filter in the pipeline. One or more filters could be a bottleneck, especially if a large number of requests appear in a stream from a particular data source. A key advantage of the pipeline structure is that it provides opportunities for running parallel instances of slow filters, enabling the system to spread the load and improve throughput.

The filters that make up a pipeline can run on different machines, enabling them to be scaled independently and take advantage of the elasticity that many cloud environments provide. A filter that is computationally intensive can run on high-performance hardware, while other less demanding filters can be hosted on less expensive commodity hardware. The filters don't even have to be in the same datacenter or geographic location, which allows each element in a pipeline to run in an environment close to the resources it requires. The next figure shows an example applied to the pipeline for the data from Source 1.

Another benefit is the resiliency that this model can provide. If a filter fails or the machine it's running on is no longer available, the pipeline can reschedule the work that the filter was performing and direct this work to another instance of the component. Failure of a single filter doesn't necessarily result in failure of the entire pipeline.

Using the Pipes and Filters pattern in conjunction with the Compensating Transaction pattern is an alternative approach to implementing distributed transactions. A distributed transaction can be broken down into separate, compensable tasks, each of which can be implemented by using a filter that also implements the Compensating Transaction pattern. The filters in a pipeline can be implemented as separate hosted tasks running close to the data that they maintain.

You can use a sequence of message queues to provide the infrastructure required to implement a pipeline. An initial message queue receives unprocessed messages. A component implemented as a filter task listens for a message on this queue, performs its work, and then posts the transformed message to the next queue in the sequence. Another filter task can listen for messages on this queue, process them, post the results to another queue, and so on until the fully transformed data appears in the final message in the queue. The next figure illustrates implementing a pipeline using message queues.

If you're building a solution on Azure you can use Service Bus queues to provide a reliable and scalable queuing mechanism. The ServiceBusPipeFilter class shown below in C# demonstrates how you can implement a filter that receives input messages from a queue, processes these messages, and posts the results to another queue.

The ServiceBusPipeFilter class is defined in the PipesAndFilters.Shared project available from GitHub.

The Start method in the ServiceBusPipeFilter class connects to a pair of input and output queues, and the Close method disconnects from the input queue. The OnPipeFilterMessageAsync method performs the actual processing of messages, the asyncFilterTask parameter to this method specifies the processing to be performed. The OnPipeFilterMessageAsync method waits for incoming messages on the input queue, runs the code specified by the asyncFilterTask parameter over each message as it arrives, and posts the results to the output queue. The queues themselves are specified by the constructor.

The following code shows an Azure worker role named PipeFilterARoleEntry, defined in the PipeFilterA project in the sample solution.

This role contains a ServiceBusPipeFilter object. The OnStart method in the role connects to the queues for receiving input messages and posting output messages (the names of the queues are defined in the Constants class). The Run method invokes the OnPipeFilterMessagesAsync method to perform some processing on each message that's received (in this example, the processing is simulated by waiting for a short period of time). When processing is complete, a new message is constructed containing the results (in this case, the input message has a custom property added), and this message is posted to the output queue.