A rate limiting pattern is appropriate in many scenarios, but it is particularly helpful for large-scale repetitive automated tasks such as batch processing.

Performing large numbers of operations using a throttled service can result in increased traffic and throughput, as you'll need to both track rejected requests and then retry those operations. As the number of operations increases, a throttling limit may require multiple passes of resending data, resulting in a larger performance impact.

As an example, consider the following naive retry on error process for ingesting data into Azure Cosmos DB:

The ingestion job completed successfully, but only after sending 30,000 records to Azure Cosmos DB even though the entire data set only consisted of 10,000 records.

There are additional factors to consider in the above example:

Rate limiting can reduce your traffic and potentially improve throughput by reducing the number of records sent to a service over a given period of time.

A service may throttle based on different metrics over time, such as:

Regardless of the metric used for throttling, your rate limiting implementation will involve controlling the number and/or size of operations sent to the service over a specific time period, optimizing your use of the service while not exceeding its throttling capacity.

In scenarios where your APIs can handle requests faster than any throttled ingestion services allow, you'll need to manage how quickly you can use the service. However, only treating the throttling as a data rate mismatch problem, and simply buffering your ingestion requests until the throttled service can catch up, is risky. If your application crashes in this scenario, you risk losing any of this buffered data.

Azure provides several durable messaging services that you can use with this pattern, including:

When you're sending records, the time period you use for releasing records may be more granular than the period the service throttles on. Systems often set throttles based on timespans you can easily comprehend and work with. However, for the computer running a service, these timeframes may be very long compared to how fast it can process information. For instance, a system might throttle per second or per minute, but commonly the code is processing on the order of nanoseconds or milliseconds.

While not required, it's often recommended to send smaller amounts of records more frequently to improve throughput. So rather than trying to batch things up for a release once a second or once a minute, you can be more granular than that to keep your resource consumption (memory, CPU, network, etc.) flowing at a more even rate, preventing potential bottlenecks due to sudden bursts of requests. For example, if a service allows 100 operations per second, the implementation of a rate limiter may even out requests by releasing 20 operations every 200 milliseconds, as shown in the following graph.

In addition, it's sometimes necessary for multiple uncoordinated processes to share a throttled service. To implement rate limiting in this scenario you can logically partition the service's capacity and then use a distributed mutual exclusion system to manage exclusive locks on those partitions. The uncoordinated processes can then compete for locks on those partitions whenever they need capacity. For each partition that a process holds a lock for, it's granted a certain amount of capacity.

One way to implement this pattern would be to use Azure Storage. In this scenario, you create one 0-byte blob per logical partition in a container. Your applications can then obtain exclusive leases directly against those blobs for a short period of time (for example, 15 seconds). For every lease an application is granted, it will be able to use that partition's worth of capacity. The application then needs to track the lease time so that, when it expires, it can stop using the capacity it was granted. When implementing this pattern, you'll often want each process to attempt to lease a random partition when it needs capacity.

To further reduce latency, you might allocate a small amount of exclusive capacity for each process. A process would then only seek to obtain a lease on shared capacity if it needed to exceed its reserved capacity.

As an alternative to Azure Storage, you could also implement this kind of lease management system using technologies such as Zookeeper, Consul, etcd, Redis/Redsync, and others.

Consider the following when deciding how to implement this pattern:

Use this pattern to:

The following example application allows users to submit records of various types to an API. There is a unique job processor for each record type that performs the following steps:

All components of the application (API, job processor A, and job processor B) are separate processes that may be scaled independently. The processes do not directly communicate with one another. 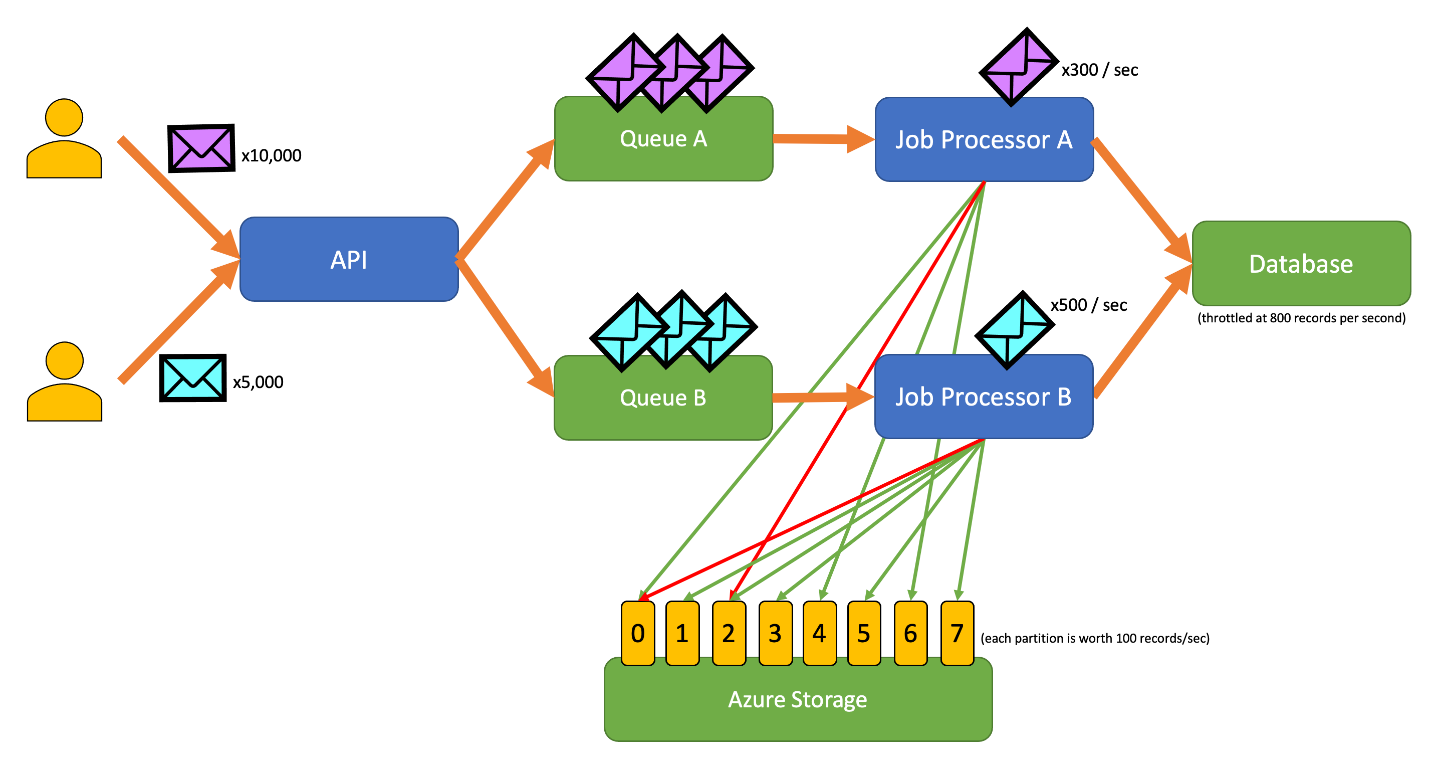 This diagram incorporates the following workflow:

After 15 seconds, one or both jobs still will not be completed. As the leases expire, a processor should also reduce the number of requests it dequeues and writes.

An implementation of this pattern, implemented in Go, is available on GitHub.

Queue-Based Load Leveling is similar but differs from the Rate Limiting pattern in several key ways: