A special thanks from Redmond

The MRTK team would like to extend a warm thanks to you, the MRTK community. Your contributions, feedback, and votes have helped MRTK win the 2021 Auggie Award for Best Developer Tool! Without your support, we wouldn't be where we are today. Whether it's adding new platform support, new features, bug fixes, suggestions, questions, or any of the other numerous ways you might have contributed: Thank you!

We've made it easier to build on Unity 2021 with the release of 2.7.3! If you find any issues while using MRTK with Unity 2021, file an issue on our GitHub repository.

Scene Understanding is now available during remoting on the HoloLens 2 with OpenXR platform.

There has been an issue with MRTK 2.7.1 UPM packages where the dependencies aren't set up correctly. The issue causes the Mixed Reality Feature Tool to fail to import MRTK 2.7.1 packages properly. The issue is now resolved in 2.7.2. There's no code change in this version compared to 2.7.1.

The Mixed Reality > Toolkit menu now contains a Show version... entry that examines the Mixed Reality Toolkit Foundation package to determine the version of MRTK that is being used by the project.

If MRTK is cloned from the GitHub repository, the version information won't be set.

Starting with MRTK 2.7.1, the authors list file is included in the Mixed Reality Toolkit Foundation package.

Starting with MRTK 2.7.1, users of the Mixed Reality OpenXR plugin will receive instructions on how to set up that plugin with MRTK. There's an option for users targeting HoloLens 2 to apply recommended settings automatically.

If you're targeting HoloLens 2 or Windows Mixed Reality headsets via OpenXR, make sure to install/update to Mixed Reality OpenXR plugin version 0.9.5 or later via Mixed Reality Feature Tool, otherwise you might miss some of the improvements above.

Data providers will now also only be loaded when the appropriate pipeline is selected, allowing both Legacy XR and XR SDK data providers to co-exist within the same profile. To accommodate this, Legacy XR and XR SDK Data Providers are now organized under different tabs within the profile view. This organization should help determine whether the correct profile is selected for the targeted XR pipeline.

Users can now configure Experience Settings, which will allow MRTK to display Mixed Reality Scene Content appropriately based on the targeted experience.

If a user's previous Experience Scale settings don't match the new Experience Settings Profile, they'll be prompted to correct it in the Inspector.

The Redesigned Configurator now guides the user through the setup process

The new MRTK Configurator provides users with step-by-step guidance to properly configure the project for XR development and use with MRTK. It covers the selection of XR pipeline, getting the platform-specific plugins, importing TextMeshPro, displaying the examples (when using UPM), and other previously included recommended settings for the project.

A new teleport hotspot component has been graduated. You can add a teleport hotspot to your GameObject to ensure that the user is in a certain position and orientation when they teleport to that location.

The dwell feature and example is now graduated from experimental. New examples of volumetric HoloLens 2 style buttons are included in the sample scene.

Support for the latest versions of the Leap Motion Unity Modules is now compatible with MRTK 2.7.0. For more information, see How to Configure MRTK for Leap Motion.

Many thanks to @jackyangzzh for contributing the new LeapMotionOrientationExample scene!

Previously, targeted speech events could only be raised on objects that were focused on with the gaze pointer. Now, objects can receive speech events if they're focused by any pointer.

Ported TextToSpeech from HTK to MRTK

The beloved TextToSpeech script is now finally available in MRTK to help you generate speech from text on the UWP platform using SpeechSynthesizer. Also added a sample scene to demonstrate the feature.

Support for the system-provided motion controller model on OpenXR

Added support, both in-editor and at runtime, for the system-provided motion controller model on OpenXR. 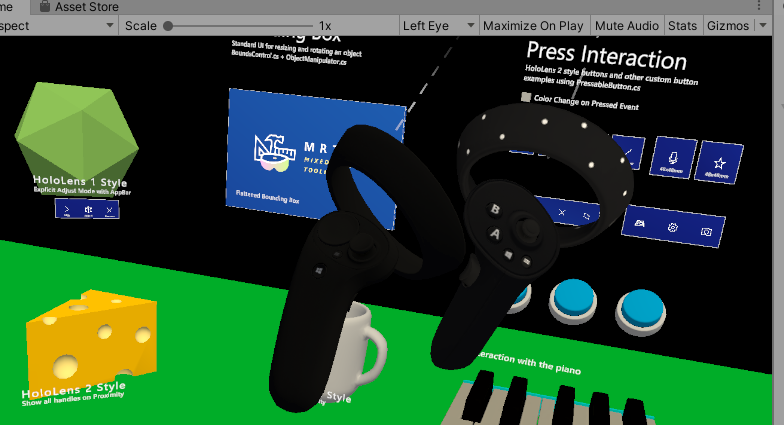 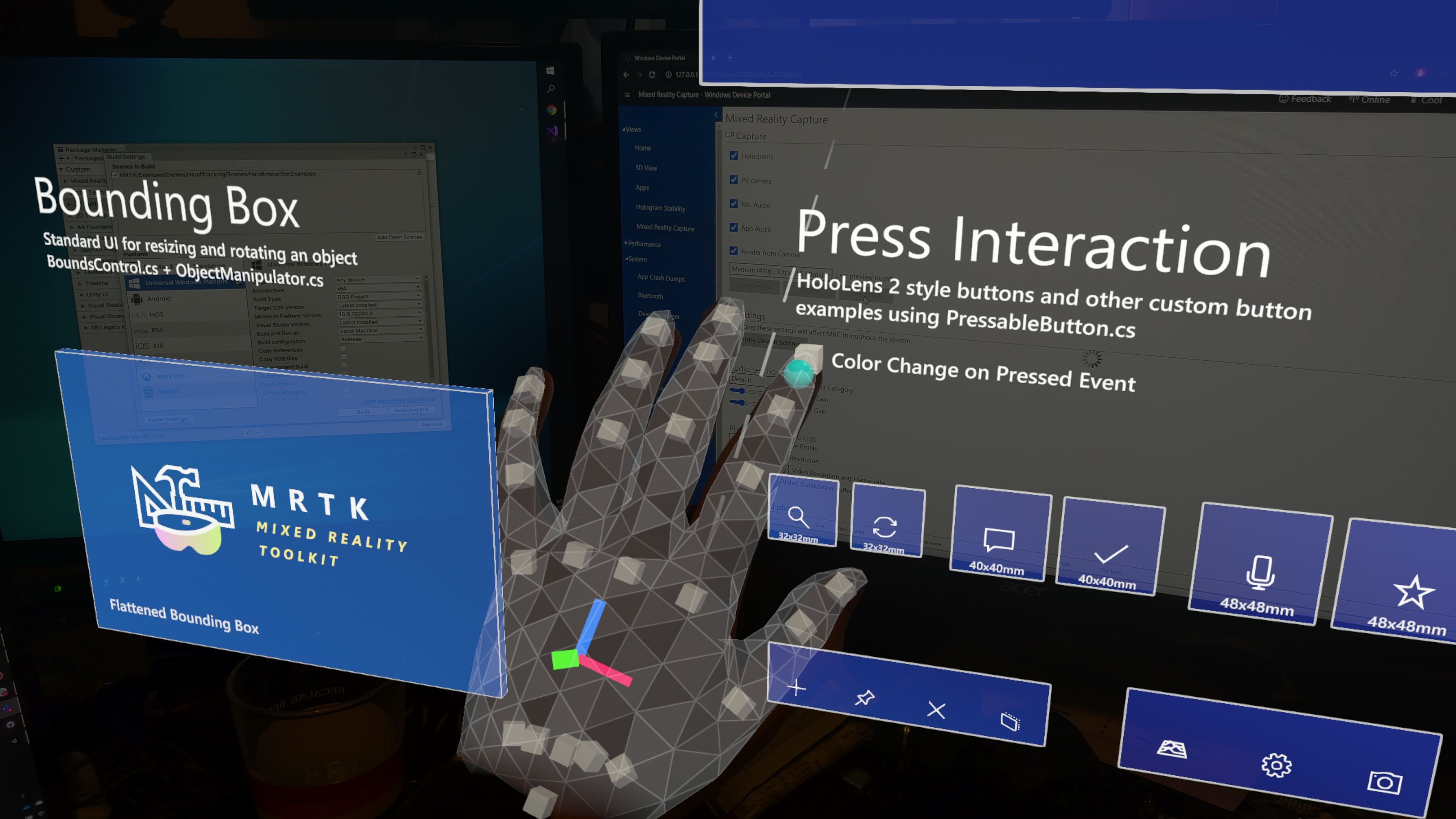 When MRTK is imported via the Mixed Reality Feature Tool, samples and demos are added to the project using the Unity Package Manager UI. After the Audio demos are imported, the WindowsMicrophoneStreamDemo.unity scene won't behave properly. This behavior is a result of a missing asmdef file for the sample.

To work around this issue, perform the following steps:

This issue will be fixed in an upcoming MRTK release.

There's a known issue with the MRTK build window on Unity 2020.3, where the "Importing assets" dialog doesn't complete after a UWP build. This issue is being investigated with Unity.

The following warning is logged in most MRTK example scenes while using Unity 2020:

The Canvas Renderer warning was added in TextMeshPro version 3.0.3. These warnings don't have an effect on MRTK's example scenes and can be cleared from the console. For more details, see Issue 9811.