Recently, I built a model of the Disney Wonder, in Lego.  (I'm known for building Lego things, like Dropping the Space Needle), and I've gotten a lot of questions, so here goes:

The Lego Wonder is as accurate as I could make it, which took about 4500 pieces.  The stats: it's about 4 feet / 1.2 meters long.  It took about 6 days (Lara says 60 hours) to build, as we were interrupted by shows on the ship, ports of call, etc.  As there are few Lego stores in the middle of the Pacific Ocean, we spent a couple weeks planning before the trip.

It Just Happened One Day

I blame it all on my wife, Lara.  We were planning on a cruise (one guess which ship), and she pointed out that on long cruises they sometimes have boat building contests.  She also mentioned that the judges might like their own ship, and, besides, it's a pretty ship. 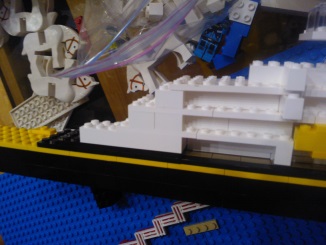 With that conversation in mind, our Lego store had a sale a few weeks before the cruise, and so I grabbed some bulk bricks.  Of course I got home tried to do some research, and discovered that all my guesses were all wrong.  (I usually underestimate how many pieces I'll need for these things).  Also, in the store there were 1x3 yellow bricks that I thought might work for life boats.  I also guessed that 16 studs wide would be about wide enough for the detail, and figured it'd be maybe 2 or 3 feet long.  Once I got the dimensions of the real ship I found how long and skinny these things are.   My width, and the structure of the balconies also sort of forced the scale.  If I wanted it 16 studs wide it was going to have to be 150 or so studs long.... 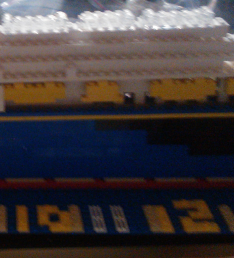 My 3-stud lifeboats weren't going to fit at that scale.  But the store didn't have any bricks the right color, so I was going to have to order bricks, with only a couple of weeks before we left on the cruise.  I browsed through parts lists and came up with a few different ideas, but I wouldn't really know until I had the bricks in hand to play with, so I ordered parts for different ways of building it.  Enough for 10 lifeboats on each side.  I tried a few things at home, but crossed my fingers that the parts would work when they came.  That went for several other pieces as well.  The stacks for example, I only had a vague idea about, and so I tried to find a few different options that might work.

My biggest problem is that I remembered the hull being blue, but that didn't work in the rough mockup of part of the hull.  I went back to the store and got black, which worked a lot better (the hull looks black in a lot of photos of the real ship), but I still wanted better.  Unfortunately the right color was very rare and difficult to find.  I managed to order some at the last minute, but it didn't seem like it would arrive in time.  I gathered some black just in case.  On the last day before we left I checked the mailbox, not really expecting anything.  There were some letters, so the mail had come, but no bricks :(  Not terribly surprised that they hadn't come, I walked up to the door, and there was a small package.  The missing bricks had arrived!

>> Like, What Do You Mean There Aren't Any Instructions (page 2)