This architecture provides guidance for designing a mission critical workload that has strict network controls in place to prevent unauthorized public access from the internet to any of the workload resources. The intent is to stop attack vectors at the networking layer so that the overall reliability of the system isn't impacted. For example, a Distributed Denial of Service (DDoS) attack, if left unchecked, can cause a resource to become unavailable by overwhelming it with illegitimate traffic.

It builds on the mission-critical baseline architecture, which is focused on maximizing reliability and operational effectiveness without network controls. This architecture adds features to restrict ingress and egress paths using the appropriate cloud-native capabilities, such as Azure Virtual Network(VNet) and private endpoints, Azure Private Link, Azure Private DNS Zone, and others.

It's recommended that you become familiar with the baseline before proceeding with this article.

The design strategies for mission-critical baseline still apply in this use case. Here are the additional networking considerations for this architecture:

The components of this architecture can be broadly categorized in this manner. For product documentation about Azure services, see Related resources.

The global resources are long living and share the lifetime of the system. They have the capability of being globally available within the context of a multi-region deployment model. For more information, see Global resources.

Azure Front Door Premium SKU is used as the global load balancer for reliably routing traffic to the regional deployments, which are exposed through private endpoints.

Azure Cosmos DB for NoSQL is still used to store state outside the compute cluster and has baseline configuration settings for reliability. Access is limited to authorized private endpoint connections.

The regional resources are provisioned as part of a deployment stamp to a single Azure region. They are short-lived to provide more resiliency, scale, and proximity to users. These resources share nothing with resources in another region. They can be independently removed or replicated to other regions. They, however, share global resources between each other. For more information, see Regional stamp resources.

Static website in an Azure Storage Account hosts a single page application (SPA) that send requests to backend services. This component has the same configuration as the baseline frontend. Access is limited to authorized private endpoint connections.

Azure Kubernetes Service (AKS) is the orchestrator for backend compute that runs an application and is stateless. The AKS cluster is deployed as a private cluster. So, the Kubernetes API server isn't exposed to the public internet. Access to the API server is limited to a private network. For more information, see the Compute cluster article of this architecture.

Build and release pipelines for a mission critical application must be fully automated to guarantee a consistent way of deploying a validated stamp.

GitHub is still used for source control as a highly available git-based platform.

Azure Pipelines is chosen to automate pipelines that are required for building, testing, and deploying a workload in preproduction and production environments.

Self-hosted Azure DevOps build agent pools are used to have more control over the builds and deployments. This level of autonomy is needed because the compute cluster and all PaaS resources are private, which requires a network level integration that is not possible on Microsoft-hosted build agents.

A significant design change from the baseline architecture is the compute cluster. In this design the AKS cluster is private. This change requires extra resources to be provisioned to gain access.

Azure Virtual Machine Scale Sets for the private build agents and jump box instances to run tools against the cluster, such as kubectl.

Azure Bastion provides secure access to the jump box VMs and removes the need for the VMs to have public IPs.

To process business or deployment operations, the application and the build agents need to reach several Azure PaaS services that are provisioned globally, within the region, and even within the stamp. In the baseline architecture, that communication is over the services' public endpoints.

In this design, those services have been protected with private endpoints to remove them from public internet access. This approach reduces the overall attack surface area to mitigate direct service tampering from unexpected sources. However, it introduces another potential point of failure and increases complexity. Carefully consider the tradeoffs with security before adopting this approach.

To connect over a private endpoint, you need a DNS record. It's recommended that DNS records associated with the services are kept in Azure Private DNS zones serviced by Azure DNS. Make sure that the fully qualified domain name (FQDN) resolves to the private IP address. 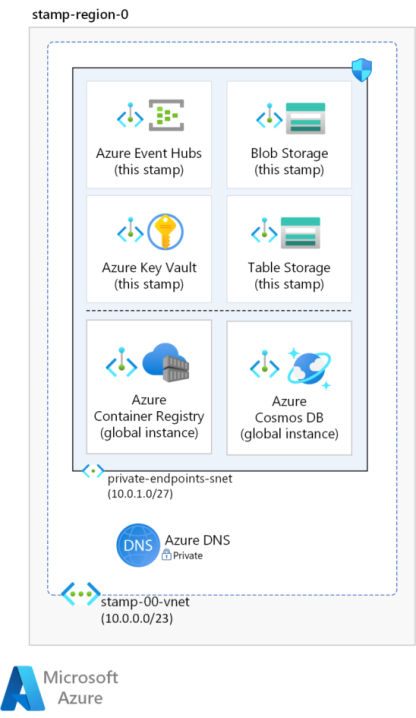 In this architecture, private endpoints have been configured for Azure Container Registry, Azure Cosmos DB, Key Vault, Storage resources, and Event Hubs. Also, the AKS cluster is deployed as a private cluster, which creates a private endpoint for the Kubernetes API service in the cluster's network.

As you add more components to the architecture, consider adding more private endpoints. For example, you can add restrictions to the observability resources. Both Azure Log Analytics and Azure Application Insights support the use of private endpoints. For details, see Use Azure Private Link to connect networks to Azure Monitor.

They can be created on the same or different subnets within the same virtual network. There are limits to the number of private endpoints you can create in a subscription. For more information, see Azure limits.

Control access to the services further by using network security groups on the subnet.

Azure Front Door Premium SKU is used as the global entry point for all incoming client traffic. It uses Web Application Firewall (WAF) capabilities to allow or deny traffic at the network edge. The configured WAF rules prevent attacks even before they enter the stamp virtual networks.

This architecture also takes advantage of Front Door's capability to use Azure Private Link to access application origin without the use of public IPs/endpoints on the backends. This requires an internal load balancer in the stamp virtual network. This resource is in front of the Kubernetes Ingress Controller running in the cluster. On top of this private Load Balancer, a Private Link service is created by AKS, which is used for the private connection from Front Door.

After connection is established, Private endpoints on Front Door network have direct connectivity with the load balancer and static web site in the stamp network over Private Link. 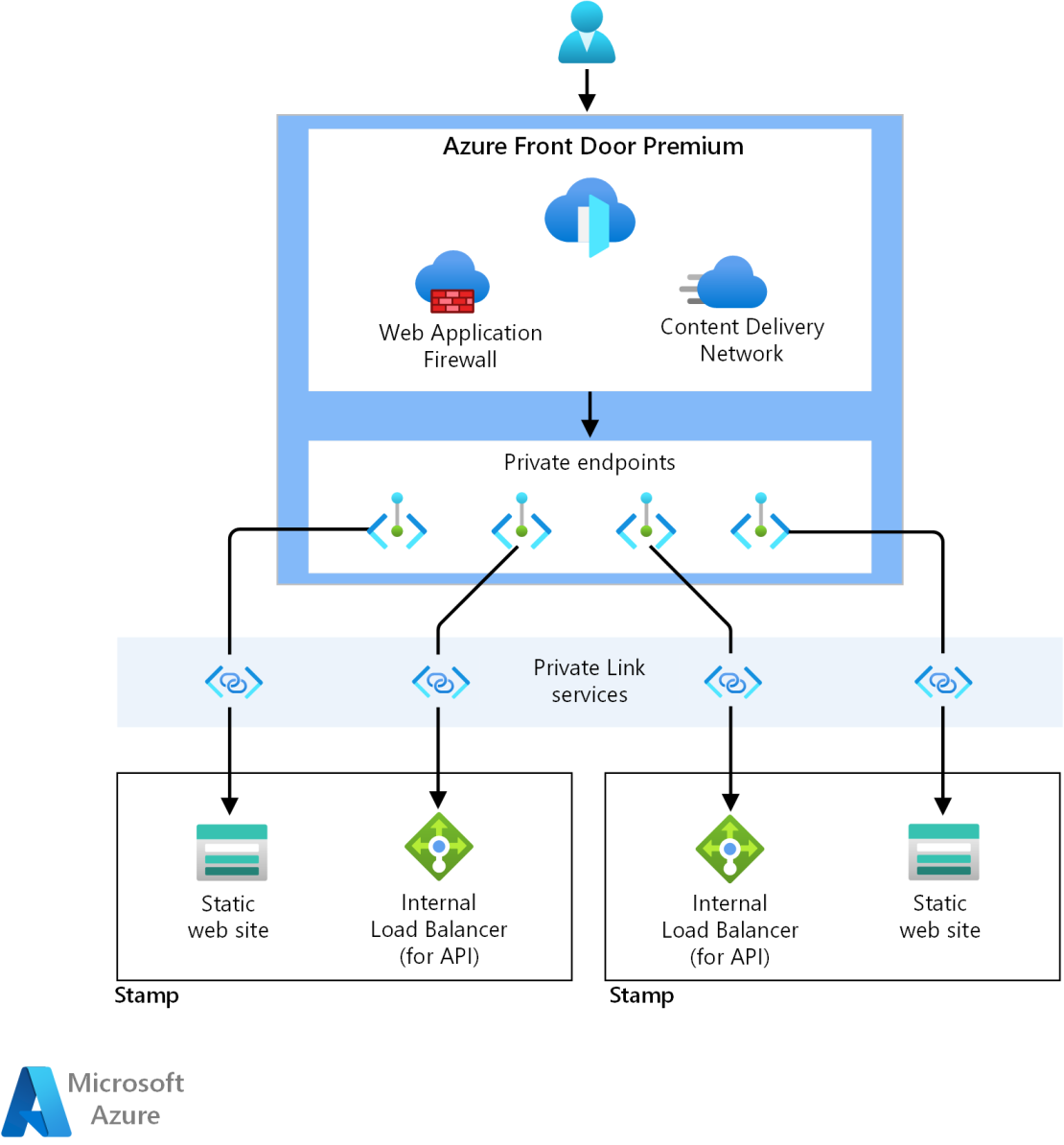 Applications might require some outbound internet connectivity. Controlling that traffic provides a way to limit, monitor, and restrict egress traffic. Otherwise, unexpected inside-out access might lead to compromise and potentially an unreliable system state. Restricted egress can also solve for other security concerns, such as data exfiltration.

Using firewall and Network Security Groups (NSGs) can make sure that outbound traffic from the application is inspected and logged.

In this architecture, Azure Firewall is the single egress point and is used to inspect all outgoing traffic that originates from the virtual network. User-defined routes (UDRs) are used on subnets that are capable of generating egress traffic, such as the application subnet.

In this architecture, there are two virtual networks: stamp network and operations network. Create further isolation within each virtual network by using subnets and network security groups (NSGs) to secure communication between the subnets.

The deployment stamp provisions a virtual network in each region.

The virtual network is divided into these main subnets. All subnets have Network Security Groups (NSGs) assigned to block any unauthorized access from the virtual network. NSGs will restrict traffic between the application subnet and other components in the network.

The operational traffic is isolated in a separate virtual network. Because the AKS cluster's API service is private in this architecture, all deployment and operational traffic must also come from private resources such as self-hosted build agents and jump boxes. Those resources are deployed in a separate virtual network with direct connectivity to the application resources through their own set of private endpoints. The build agents and jump boxes are in separate subnets.

Instead of using private endpoints, an alternate approach is to use virtual network peering. However, peering adds complexity that can be hard to manage especially when virtual networks are designed to be ephemeral.

Both the build agents (and optionally jump boxes) need to access PaaS services that are located globally and within the regional stamp. Similar to the regional stamp virtual network, a dedicated subnet is created for the private endpoints to the necessary PaaS services. NSG on this subnet makes sure ingress traffic is allowed only from the management and deployment subnets. 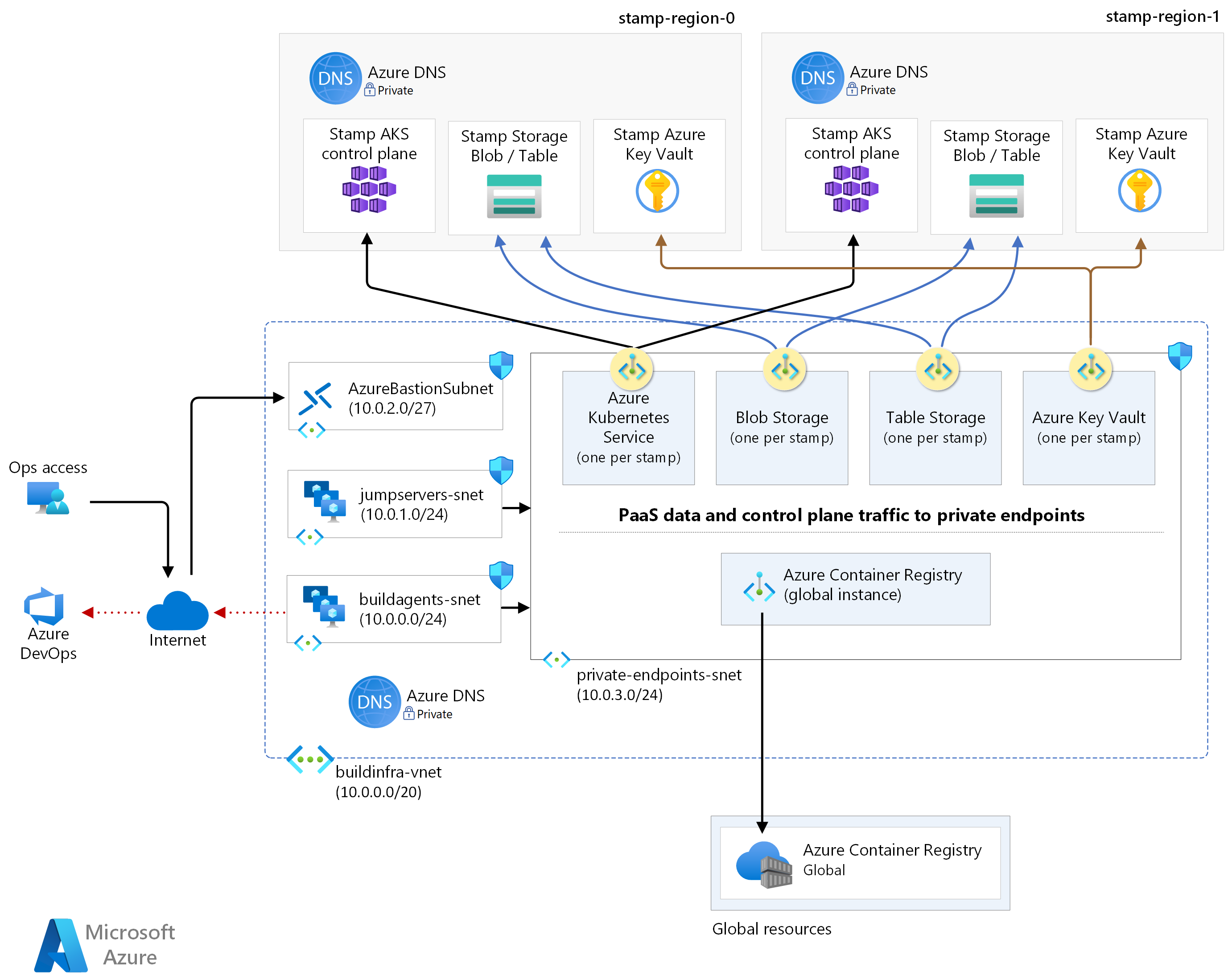 A typical use case is when an operator needs to access the compute cluster to run management tools and commands. The API service in a private cluster can't be accessed directly. That's why jump boxes are provisioned where the operator can run the tools. There's a separate subnet for the jump boxes.

But, those jump boxes need to be protected as well from unauthorized access. Direct access to jump boxes by opening RDP/SSH ports should be avoided. Azure Bastion is recommended for this purpose and requires a dedicated subnet in this virtual network.

Connectivity through Azure Bastion and jump boxes can have an impact on developer productivity, such as running debugging tools requires additional process. Be aware of these impacts before deciding to harden security for your mission-critical workload.

You can further restrict access to the jump box subnet by using an NSG that only allows inbound traffic from the Bastion subnet over SSH.

To build deployment pipelines, you need to provision additional compute to run build agents. These resources won't directly impact the runtime availability of the workload but a reliability failure can jeopardize the ability to deploy or service your mission critical environment. So, reliability features should be extended to these resources.

This architecture uses Virtual Machine Scale Sets for both build agents and jump boxes (as opposed to single VMs). Also, network segmentation is provided through the use of subnets. Ingress is restricted to Azure DevOps.

There's a significant impact on cost for mission-critical workloads. In this architecture, technology choices such as using Azure Front Door Premium SKU and provisioning Azure Firewall in each stamp will lead to increased costs. There are also added costs related to maintenance and operational resources. Such tradeoffs must be carefully considered before adopting a network-controlled version of the baseline architecture.

The networking aspects of this architecture are implemented in the Mission-critical Connected implementation.

The Connected implementation is intended to illustrate a mission-critical workload that relies on organizational resources, integrates with other workloads, and uses shared services. It builds on this architecture and uses the network controls described in this article. However, the Connected scenario assumes that virtual private network or Azure Private DNS Zone already exist within the Azure landing zones connectivity subscription.

For details on the design decisions made in this architecture, review the networking and connectivity design area for mission-critical workloads in Azure Well-architected Framework.

For product documentation on the Azure services used in this architecture, see these articles.