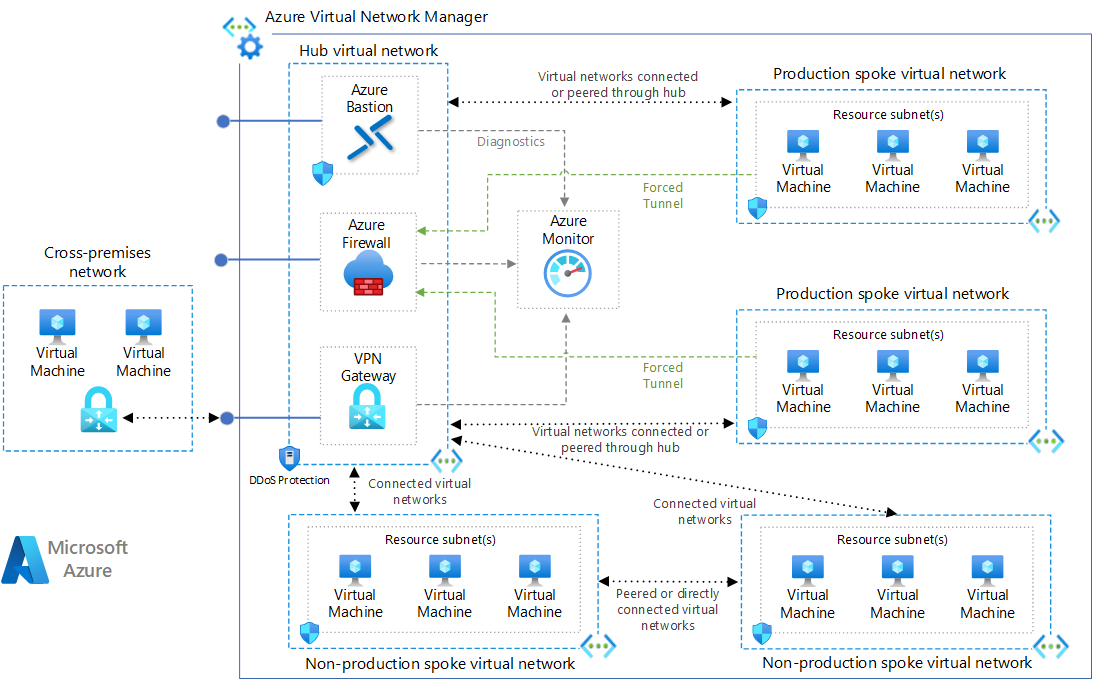 As a general rule of thumb, a recommendation is to have at least one hub per region. This configuration helps avoid a single point of failure. For example, to avoid Region A resources being affected at the network level because of an outage in Region B.

The following recommendations outline how the subnets on the virtual network should be configured.

A hub-spoke topology can also be used without a gateway if you don't need cross-premises network connectivity.

Create a subnet named GatewaySubnet, with an address range of at least /27. The /27 address range gives it enough scalability configuration options to prevent reaching the gateway size limitations in the future. The virtual network gateway requires this subnet.

Create a subnet named AzureFirewallSubnet, with an address range of at least /26. Regardless of scale, the /26 address range is the recommended size and covers any size limitations in the future. This subnet doesn't support Network Security Groups (NSGs). Azure Firewall requires this subnet. If you use a partner NVA, follow its network requirements.

Suppose you have several spokes that need to connect with each other. In that case, you'll run out of possible peering connections quickly because the number of virtual network peerings per virtual network is limited. For more information, see Networking limits. In this scenario, consider using user-defined routes (UDRs) to force traffic destined to a spoke to be sent to Azure Firewall or a network virtual appliance acting as a router at the hub. This change will allow the spokes to connect to each other.

While Azure Firewall is primarily used for egress security, it can be used as an ingress point. The topology in this article is designed to facilitate egress flows. For more ingress considerations to hub network virtual appliance and ingress routing, see Firewall and Application Gateway for virtual networks.

Consider what services are shared in the hub to ensure the hub scales for a larger number of spokes. For instance, if your hub provides firewall services, consider your firewall solution's bandwidth limits when adding multiple spokes. You can move some of these shared services to a second level of hubs.

Discoverability of the desired virtual networks to manage through AVNM can be defined using the Scopes feature. This feature allows flexibility on the desired number of AVNM resource instances, which allows the further democratization of management for groups of VNets.

VNets in any subscription, management group, or region under the same Azure AD tenant can be grouped into network groups to ensure uniformity on the expected connectivity and network rules. Virtual networks can be automatically or manually onboarded to the network group through dynamic or static memberships. 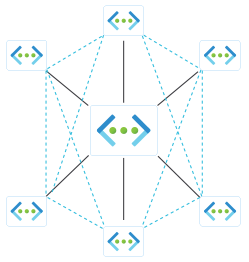 To ensure a baseline set of security rules, VNets within the same network group can be associated with security admin rules. Security admin rules are evaluated before NSG rules and have the same nature as NSGs, with support for prioritization, service tags, and L3-L4 protocols.

Finally, to facilitate a controlled rollout of network groups, connectivity, and security rules changes, AVNM's deployments feature allows you to safely release these configurations' breaking changes to the hub-and-spoke environments.

Consider rightsizing the Azure Firewall to ensure you use all deployed resources effectively. Review what features you need and decide on what tier is the most suitable for your current set of workloads. See What is Azure Firewall to learn about the available SKUs.

Consider planning for IP addressing based on your peering requirements, and ensure the address space doesn't overlap across cross-premises locations and Azure locations.

Use Azure Network Watcher to monitor and troubleshoot the network components. Tools like Traffic Analytics will show you the systems in your virtual networks that generate the most traffic. Then you can visually identify bottlenecks before they degenerate into problems. Network Performance Manager is the right tool to monitor information about Microsoft ExpressRoute circuits. VPN diagnostics is another tool to help troubleshoot site-to-site VPN connections connecting your applications to users on-premises.

You should also consider enabling the Azure Firewall diagnostic logging to better get insights into DNS requests and allow/deny results in the logs.

This deployment includes one hub virtual network, and two peered spokes. An Azure Firewall and Azure Bastion host are also deployed. Optionally, the deployment can include virtual machines in the first spoke network and a VPN gateway.

The hub in a hub-spoke network topology is the main component in a connectivity subscription in an Azure Landing Zone.