Hunting Down and Killing Ransomware

Scareware, a type of malware that mimics antimalware software, has been around for a decade and shows no sign of going away. The goal of scareware is to fool a user into thinking that their computer is heavily infected with malware and the most convenient way to clean the system is to pay for the full version of the scareware software that graciously brought the infection to their attention. I wrote about it back in 2006 in my The Antispyware Conspiracy blog post, and the fake antimalware of today doesn’t look much different than it did back then, often delivered as kits that franchisees can skin with their own logos and themes. There’s even one labeled Sysinternals Antivirus: 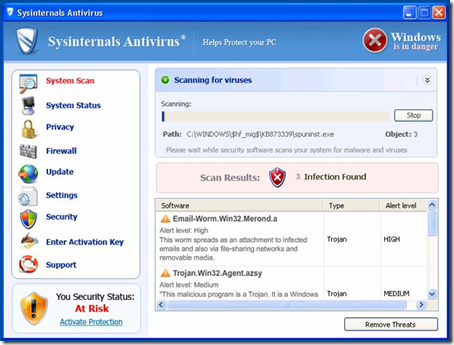 A change that’s been occurring in the scareware industry over the last few years is that most scareware today also classifies as ransomware. The examples in my 2006 blog post merely nagged you that your system was infected, but otherwise let you continue to use the computer. Today’s scareware prevents you from running security and diagnostic software at the minimum, and often prevents you from executing any software at all. Without advanced malware cleaning skills, a system infected with ransomware is usable only to give in to the blackmailer’s demands to pay.

In this blog post I describe how different variants of ransomware lock the user out of their computer, how they persist across reboots, and how you can use Sysinternals Autoruns to hunt down and kill most current ransomware variants from an infected system.

Before you can hunt effectively, you must first understand your prey. Fake-antimalware-type scareware, by far the most common type of ransomware, usually aims at being constantly annoying rather than completely locking a user out of their system. The prevalent strains use built-in lists of executables to determine what that they will block, which usually includes most antimalware and even the primary Sysinternals tools. They customarily let the user run most built-in software like Paint, but sometimes will block some of those. When they block an executable they display a dialog falsely claiming that it was blocked because of an infection:

But malware has gotten even more aggressive in the last couple of years, not even pretending to be anything other than the ransomware that they are. Take this example, which completely takes over a computer, blocking all access to anything except its own window, and demands an unlock code to regain the use of the system that the user must purchase by calling the number specified (in this case one with a Russian country code) : 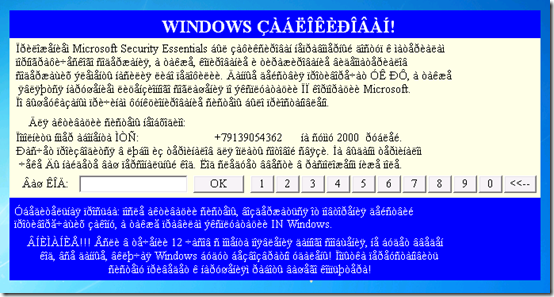 Here’s one that similarly takes over the computer, but forces the user to do some online shopping to redeem the computer’s use (I haven’t investigated to see what amount of purchasing returns the use of the computer): 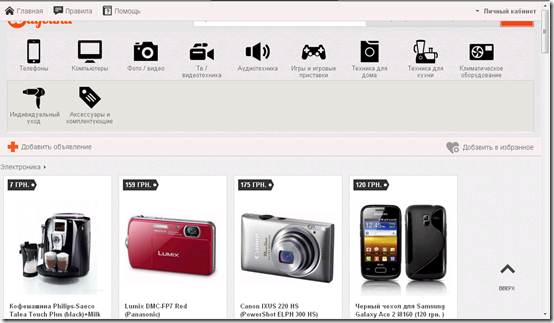 And here’s one that I suppose can also be called scareware, because it informs the user that their system harbors child pornography, something that would be horrifying news to most people. The distributor must believe that the fear of having to defend against charges of child pornography will dissuade victims from going to the authorities and convince them to instead pay the requested fee. 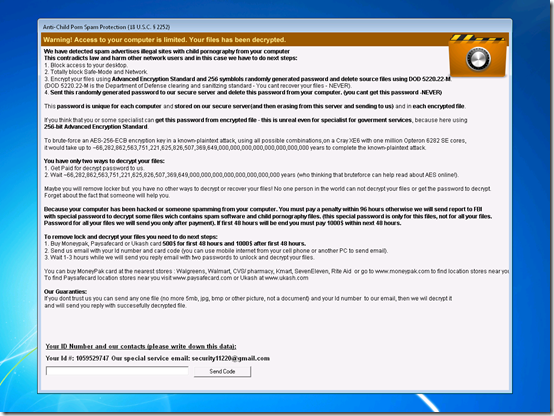 Some ransomware goes so far as to present itself as official government software. Here’s one supposedly from the French police that informs users that pirated movies reside on their computer and they must pay a fine as punishment: 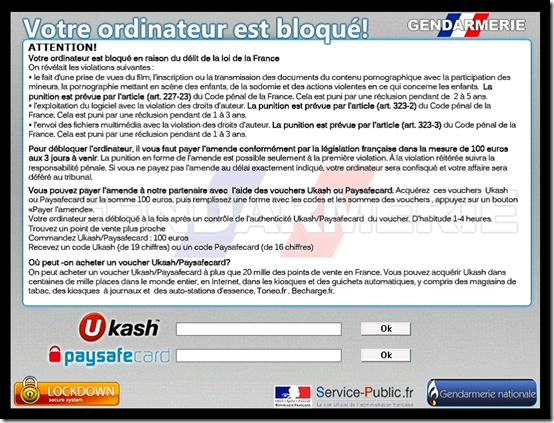 As far as how these malefactors lock users out of their computer, there are many different techniques in practice. One commonly used by the fake-antimalware variety, like the Security Shield malware shown in an earlier screenshot, is to block the execution of other programs by simply watching for the appearance of new windows and forcibly terminating the owning process. Another technique, used by the online shopping ransomware example pictured above, is to hide any windows not belonging to the malware, thus technically enabling you to launch other software but not to interact with it. A similar approach is for malware to create a full-screen window and to constantly raise the window to the top of the window order, obscuring all other application windows behind it. I’ve also seen more devious tricks, like one sample that creates a new desktop and switches to it, similar to the way Sysinternals Desktops works – but while your programs are still running, you can’t switch to their desktop to interact with them.

Finding a Position from Which to Hunt

The first step for cleaning a system of the tenacious grip of ransomware is to find a place from which to perform the cleaning. All of the lock-out techniques make it impossible to interact with a system from the infected account, which is typically its primary administrative account. If the victim system has another administrative account and the malware hasn’t hijacked a global autostart location that infects all accounts, then you’ve gotten lucky and can clean from there.

Unfortunately, most systems only have one administrative account, removing the alternate account option. The fallback is to try Safe Mode, which you can reach by typing F8 during the boot process (reaching Safe Mode is a little more difficult in Windows 8). Most ransomware configures itself to automatically start by creating an entry in the Run or RunOnce key of HKCU\Software\Microsoft\Windows\CurrentVersion (or the HKLM variants), which Safe Mode doesn’t process, so Safe Mode can provide an effective platform from which to clean such malware. A growing number of ransomware samples modify HKCU\Software\Microsoft\Window NT\CurrentVersion\Winlogon\Shell (or the HKLM location), however, which both Safe Mode and Safe with Networking execute. Safe Mode with Command Prompt overrides the registry shell selection, so it circumvents the startup of the majority of today’s ransomware and is the next fallback position: 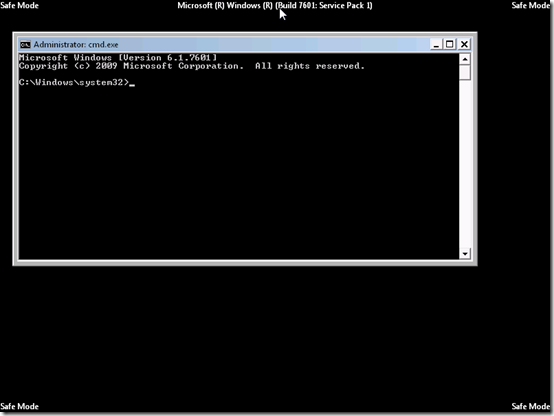 Finally, if the malware is active even in Safe Mode with Command Prompt, you’ll have no choice but to go offline hunting in an alternate Windows installation. There are a number of options available. If you have Windows 8, creating a Windows 8 To Go installation is ideal, since it is literally a full version of Windows. An alternative is to boot the Windows Setup media and type Shift+F10 to open a command-prompt when you reach the first graphical screen: 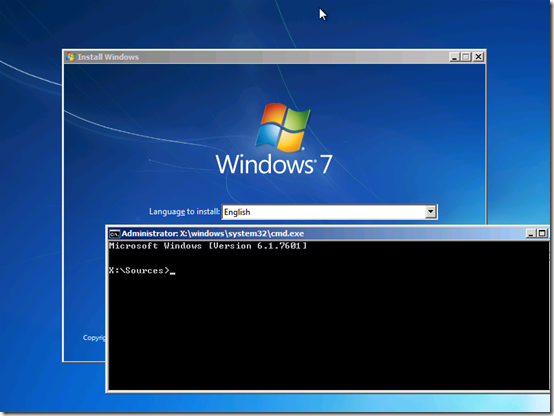 You won’t have access to Internet Explorer and many applications won’t work properly in Windows Setup’s stripped-down environment, but you can run many of the Sysinternals tools. Finally, you can create a Windows Preinstallation Environment (WinPE) boot media, which is an environment similar to that of Windows Setup and something that Microsoft Diagnostic and Repair Tooltkit (MSDaRT) uses.

Now that you’ve found your hunting spot, it’s time to select your weapon. The easiest to use is of course off-the-shelf antimalware software. If you’re logged in to an alternate account or Safe Mode you can use standard online-scanning products, many of which are free, like Microsoft’s own Windows Defender. If you’re booted into a different Windows installation, however, then you’ll need to use an offline scanner, like Windows Defender Offline. If the antimalware engine isn’t able to detect or clean the infection, you’ll have to turn to more a more precise and manual weapon.

One utility that enables you to rip the malware’s tendrils off the system is Sysinternals Autoruns. Autoruns is aware of over a hundred places where malware can configure itself to automatically start when Windows boots, a user logs in, or a specific built-in application launches. The way you need to run it depends on what environment you’re hunting from, but in all cases you should run it with administrative rights. Also, Autoruns automatically starts scanning when you start it; you should abort the initial scan by pressing the Esc key, then open the Filter dialog and select the options to verify signatures and to hide all Microsoft entries so that malware will appear more prominently, and restart the scan: 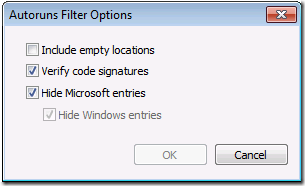 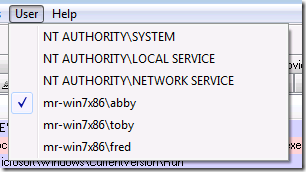 If you’ve booted into a different operating system then you need to use Autoruns offline support, which requires you to specify the root of the target Windows installation and the target user profile. Open the Analyze Offline System dialog from the File menu and enter the appropriate directories: After Autoruns has scanned the system, you have to spot the malware. As I explain in my Malware Hunting with the Sysinternals Tools presentations, malware often exhibits the following characteristics: 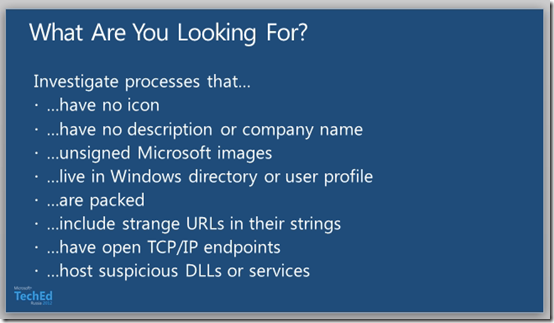 Of course, since Autoruns just shows autostart configuration and not running processes, some of these attributes are not relevant. Nevertheless, I’ve found in my examination of several dozen variants of current ransomware that all of them of them satisfy more than one, most commonly by not having a description or company name and having a random or suspicious file name.

One downside to offline scanning is that signature verification doesn’t work properly. This is because Windows uses catalog signing, as opposed to direct image signing, where it stores signatures in separate files rather than in the images themselves. Autoruns doesn’t process offline catalog files (I’ll probably add that support in the near future), so all catalog-signed images will show up as unverified and highlighted in red.  Since most malware doesn’t pretend to be from Microsoft, you can try an initial scan with the option to verify code signatures unchecked. Here’s the result of an offline scan with signature verification disabled of a ransomware infection that takes over two autostart locations - see if you can spot them:

If you are unsure about an image, you can try uploading it to Virustotal.com for analysis by around 40 of the most popular antivirus engines, searching the Web for information, and looking at the strings embedded in the file using the Sysinternals Strings utility.

Once you’ve determined which entries belong to malware, the next step is to disable them by deselecting the checkboxes of their autostart entries. This will allow you to re-enable the entries later if you discover you made a mistake. It doesn’t hurt to also move the malware files and any other suspicious files in the directory of the ones configured to autostart to another directory. Moving all  the files makes it more likely that you’ll break the malware even if you miss an autostart location.

Next, check to see if your prey is dead by booting the system and logging into the account that was infected. If you still see signs of an infection, you might have missed something in your Autoruns analysis, so repeat the steps. If that doesn’t yield success, the malware may be a more sophisticated strain, for example one that infects the Master Boot Record or that infects the system in some other unconventional way to persist across reboots. There is also ransomware that goes further and encrypts files, but they are relatively rare. Fortunately, ransomware authors are lazy and generally don’t need to go to such extents to be effective, so a quick analysis with Autoruns is virtually always lethal.

If you liked this post, you’ll like my two highly-acclaimed cyberthriller novels, Zero Day and Trojan Horse. Watch their exciting video trailers, read sample chapters and find ordering information on my personal site at https://russinovich.com