Pokémon Go, the augmented reality app that allows players to catch virtual critters called Pokémon in real life, is undoubtedly the juggernaut of mobile games in 2016. But when Daiana Beitler, Microsoft Philanthropies Lead, opened DigiGirlz Singapore 2016 by telling a room full of 13 to 16 year old girls that they can also be creators—not just consumers—of technology, this set an uplifting tone for the rest of the event.

This message is significant to many women who are considering careers in science and technology, for the age-old fact that there are not enough women in these fields still persists today. Despite how women make up half of university students in Singapore, only 27 percent of female graduates went on to work in these industries—a detail Jessica Tan, Managing Director of Microsoft Singapore, was quick to point out.

But thankfully, she added, this situation is changing. Today, a fifth of all tech start-up founders are women. And while men still outnumber women in the industry, technology companies are now hiring women over two times faster than men.

To narrow the gender gap even further, Microsoft organized DigiGirlz on September 16 in an effort to introduce more young women to computer science, and help break down any barriers they may face while pursuing studies in Science, Technology, Engineering and Math (STEM). A part of the Microsoft YouthSpark initiative, DigiGirlz was attended by 95 local and international school students, along with their teachers and parents—providing them the ideal platform to find out more and air their thoughts on the topic of women in technology.

During her keynote speech, Jessica stressed that the gender gap is not due to the lack of interest from women, but the prevalent misconception that technology is only for men and those who know how to code.

To drive home this point, the girls were offered hands-on coding experience through the Minecraft Hour of Code tutorial, a set of 14 puzzles based on the popular video game Minecraft. With some assistance from Microsoft Student Partner Sherry Wong, they picked up coding basics. Some even created their first lines of code! 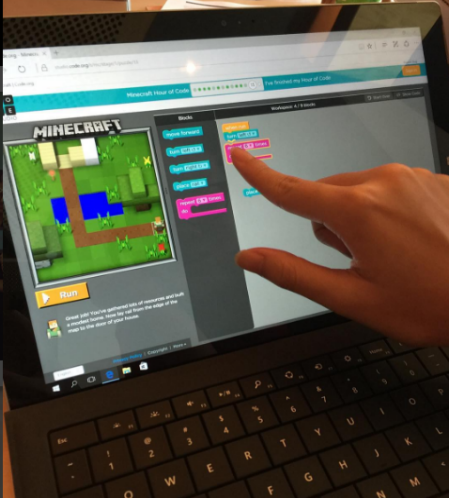 Students could navigate and explore the two-dimensional world of Minecraft during the workshop.[/caption]

Moreover, the participants were also introduced to Microsoft Imagine, Microsoft Azure and WordPress on Azure: cloud-based developer tools that can help them create online content. They were then told to apply their new-found skills in a WordPress contest, which involved developing a blog article that answers the simple question: Given a chance, how would you use technology to change the way you experience your everyday life?

But what better way to gain insights into the industry than to interact with the leaders themselves? The participants had the opportunity to chat with five technology professionals from Microsoft as well as Merck, a pharmaceutical company, over a panel discussion.

Themed “Imagine Your Future”, the panelists offered an insider’s look into the tech industry, from sharing their personal experiences to providing tips on how computer science can help them pursue their dream career. This was followed by a Question and Answer session, where the students posed their burning questions to the speakers.

In one instance, a girl asked if the speakers had made any career mistakes, and what they would have done differently if given a second chance. To this, Sindhura Sunkara, the Regional Launch Manager of Microsoft Asia Pacific Operations, had this nugget of wisdom to share, “In life, it’s always okay to make mistakes. In fact, mistakes not only make you stronger, but also help you become a much better person.” 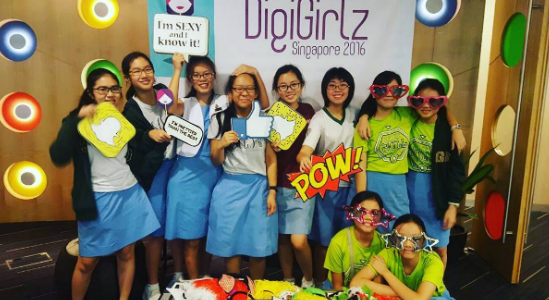 “DigiGirlz has taught us that the use of technology transcends the boundaries of gender, and that as girls, we can surpass stereotypes and flourish in the field of technology” – Ng De Qi, a DigiGirlz participant[/caption]

However, it was not all work and no play at the DigiGirlz event; the program concluded with a dance-off at the Kinect booth!

“The event was amazing and I truly enjoyed taking part in the hands-on activities and interacting with the technology professionals!” said a participant with a smile. “I really look forward to the next DigiGirlz event.”

The success of this event proves the point: that women are as invested to explore the world of tech when given the opportunity. We hope DigiGirlz sets the pace for the many movements that will narrow the gender gap in STEM, and spur the brightest minds—be it men or women—to innovate and change the world.