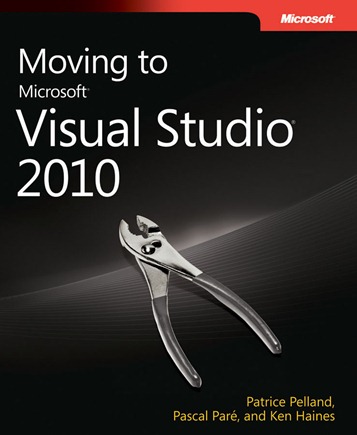 Moving to Microsoft Visual Studio 2010 was written with three audiences in mind:

Part II is for developers moving from Visual Studio 2005.

And Part III is for developers moving from Visual Studio 2008.

Please see this post for an extensive description of the book’s content, including “Who Is This Book for?,” “What Is the Book About?,” and “How Will This Book Help Me Move to Visual Studio 2010?” (Note that the links in that post are to a draft preview version of the book. Links to the final and complete book appear immediately below in this post.)

You can download a PDF of the book here.

You can download an XPS of the book here.

And you can download the book’s sample code here.

P.S. Let us know what you think of the book later by filling out our survey at https://www.microsoft.com/learning/booksurvey. Thank you!