Hyper-V Dynamic Memory is a new feature in Windows Server 2008 R2 SP1 that allows the memory assigned to guest virtual machines to vary according to demand. Using this feature with SQL Server is supported, but how well does it work in an environment where available memory can vary dynamically, especially since SQL Server likes memory, and is not very eager to let go of it? The next three posts will look at this question in detail.

In Part 1 Serdar Sutay, a program manager in the Windows Hyper-V team, introduces Dynamic Memory with an overview of the basic architecture, configuration and monitoring concepts. In subsequent parts we will look at SQL Server memory handling, and develop some guidelines on using SQL Server with Dynamic Memory.

The primary reason memory is usually the bottleneck for higher VM densities is that users tend to be generous when assigning memory to their VMs. Here are some memory sizing practices we’ve heard from customers:

· I assign 4 GB of memory to my VMs. I don’t know if all of it is being used by the applications but no one complains.

· I take the minimum system requirements and add 50% more.

· I go with the recommendations provided by my software vendor.

In reality correctly sizing a virtual machine requires significant effort to monitor the memory usage of the applications. Since this is not done in most environments, VMs are usually over-provisioned in terms of memory. In other words, a SQL Server VM that is assigned 4 GB of memory may not need to use 4 GB.

How does Dynamic Memory help?

· Memory Demand: Memory Demand is the amount determined by Dynamic Memory as the memory needed by the applications in the VM. In Windows Server 2008 R2 SP1, this is equal to the total amount of committed memory of the VM.

· Memory Buffer: Memory Buffer is the amount of memory assigned to the VMs in addition to their memory demand to satisfy immediate memory requirements and file cache needs.

What happens when there is not enough physical memory available on the host?

Based on these concepts “Startup Memory”, “Maximum Memory”, “Memory Buffer” and “Memory Weight” can be configured as shown below in Windows Server 2008 R2 SP1 Hyper-V Manager. Memory Demand is automatically calculated by Dynamic Memory once VMs start running. 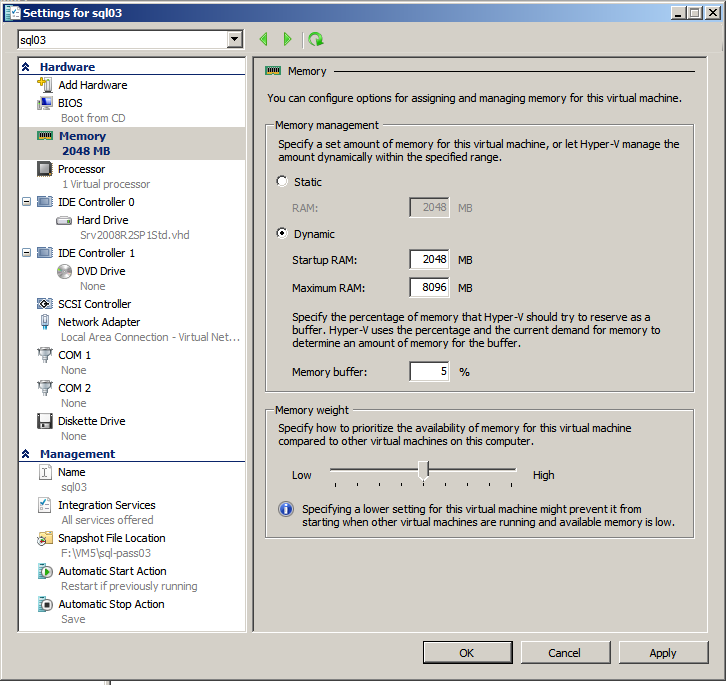 · Memory Status displays the current memory status of the VM. This column can represent three values for a VM:

o OK: In this condition the VM is assigned the total of Memory Demand and Memory Buffer it needs.

o Low: In this condition the VM is assigned all the Memory Demand and a certain percentage of the Memory Buffer it needs.

o Warning: In this condition the VM is assigned a lower memory than its Memory Demand. When VMs are running in this condition, it’s likely that they will exhibit performance problems due to internal paging happening in the VM.

So far so good! But how does it work with SQL Server?

SQL Server is aggressive in terms of memory usage for good reasons. This raises the question: How do SQL Server and Dynamic Memory work together?

To understand the full story, we’ll first need to understand how SQL Server Memory Management works. This will be covered in our second post in “SQL and Dynamic Memory” series.

Meanwhile if you want to dive deeper into Dynamic Memory you can check the below posts from the Windows Virtualization Team Blog: